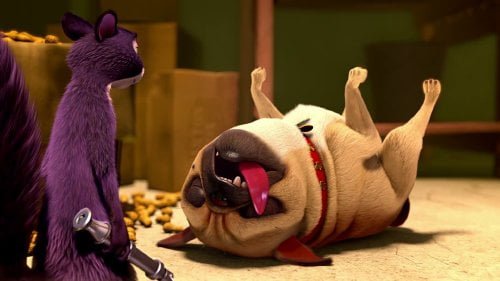 With winter approaching, a Surly squirrel (voice of Will Arnett) is banished from the park after his attempted heist of a roasted nut cart ends up the torching the large oak which housed the park animals' food supply. Surly's terrified in the big city until he sees the shop window which inspires him to plot "The Nut Job."

What a strange animal is cowriter (with "Over the Hedge's" Lorne Cameron)/director Peter Lepeniotis's new animation, a movie about a bunch of animals trying to achieve one goal with one half trying to double cross the other while equally back stabbing humans are aiming for the opposite. The film isn't really witty enough to make adults laugh, although it's chock full of references to 40's noir crime movies (it's like an animated homage to Woody Allen's "Small Time Crooks," which itself reached back to 1942's "Larceny, Inc."), and it's a little plot heavy for little kids, although they'll probably enjoy the adventure (and fart jokes?!). "The Nut Job" seems aimed at one weird demographic - late elementary school kids and indulgent cinephiles. Surly is an outsider, perpetually outshine by the heroic squirrel Grayson (voice of Brendan Fraser) and disliked by park leader Raccoon (voice of Liam Neeson). His only friend is the mute rat Buddy, who Surly discourages from following him. But Buddy proves invaluable in gaining access to Maury's Nut Shop, now a front for hardened convict King's (voice of Stephen Lang) plan to rob the bank it abuts. It's a good thing King's safe cracker Fingers (voice of James Rankin) is sensitive to the dog whistle used for guard dog Precious (voice of Maya Rudolph) as it falls into Surly's paws, giving him control of the pug. Meanwhile Grayson, now addled due to the nut cart incident, and Andie (voice of Katherine Heigl) have also made their way into the city in search of food and when they run into Surly, Andie coerces him into teaming up, but they'll have to circumvent the robbers who plan on refilling the bank's vault with sacks of nuts. The film's a bit lackluster as it starts off, especially when lines like 'Are you nuts?' are supposed to pass for humor. But things pick up at Maury's when we meet the square-jawed, block-like King, his amusingly cliched cronies and moralistic moll Lana (voice of Sarah Gadon). Suddenly we're in a period piece (also born out by the city of Oakton itself), complete with climatic chase scene capped at the precipice of rushing falls. The filmmakers also dodge the classic love triangle with Surly, Andie and Grayson, instead focusing on the bromantic relationship between Surly and Buddy, who likes to place his face close to his friend's to gaze at him adoringly. King's disloyalty to his crew is paralleled by Raccoon, who reveals to his right-hand Mole (voice of Jeff Dunham) that his paternal leadership is actually a means to control the park by controlling the amount of food doled out to its denizens. But despite these welcome distractions, the film runs long at 86 minutes and should have been a lot funnier. A computer animated Psy pops up for a 'Gangnam Style' closing credit roll which can only be explained by the film's having been produced in South Korea.