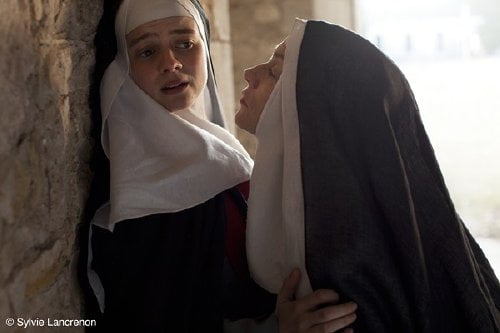 In 1765 at the home of the Baron de Lasson (Lou Castel, "The American Friend"), a young woman, her hair shorn short, sleeps, as he greets his guest, the Marquis de Croismare (Pierre Nisse, "The Son"). The Marquis sees a handwritten memoir chronicling the life of Suzanne Simonin (Pauline Etienne, "Black Heaven") and reads the story of the sleeping girl who was coerced into becoming "The Nun."

This is the second French language adaptation of Denis Diderot's 18th century novel (cowriter (with Jérôme Beaujour, "La Moustache")/director Guillaume Nicloux was born the year of Jacques Rivette's version), a work from the age of enlightenment which exposes rampant Church corruption and what is essentially enslavement of young women of limited options, a "Magadalene Sisters" of its time. It helps to know that Diderot's book began as a series of prank 'letters' from his unwilling nun begging from help from a friend of his, as Nicloux's film borders on camp in its third act (aided by Isabelle Huppert's hothouse performance), but he delivers a stunning final scene that appears to be his own. As marital dowries were the norm, parents with three, as Suzanne's, were often in a financial pickle. With elder sisters Lucie and Armelle married off, there's simply no funding for Suzanne and her father (Gilles Cohen, "A Prophet") insists on sending her to a nunnery. There, the kindly Madame de Moni (Françoise Lebrun, "The Mother and the Whore," "Séraphine") makes things as easy as possible for the unhappy novice, but when it's time to take her vows Suzanne shocks everyone by answering the priest with 'No's.' Back at home, Father Castella (Marc Barbé, "Mozart's Sister") advises Suzanne that her sisters will put their children ahead of her, making her beg for pennies while her mother (Martina Gedeck, "The Lives of Others") reveals she is the product of an affair and begs the girl to help her atone for her only sin. Suzanne dejectedly accepts her fate, but when she returns to the convent she's shocked with the news that de Moni has died. In her place is Mother Superior Christine (Etienne's "Black Heaven" costar Louise Bourgoin), an ambitious nun whose new house rules boast a sadistic streak. Suzanne rebels and is thrown into a dungeon where her plight so shocks a visiting bishop, he denounces Christine. She's moved with the help of the moneyed mother of another young nun, Soeur Ursule (Alice de Lencquesaing, "Water Lilies," "Summer Hours") as long as Suzanne agrees to drop all communication with her best friend. At her new home, Suzanne finds herself the recipient of unwanted sexual attentions from Supérieure Saint-Eutrope (Isabelle Huppert) and the mad jealousy of Saint-Eutrope's most recent conquest Soeur Thérèse (Agathe Bonitzer, "La belle personne"). Her priest confessor is so disturbed by what Suzanne reveals, he smuggles a key for her to make her escape. And so Suzanne returns to the film's prologue, where she appears to be finally safe in the home of her mother's wealthy lover. Nicloux's shepherded Etienne well, the actress giving an edgy performance which almost skirts sympathy and cinematographer Yves Cape ("My Vie en Rose," "Hors Satan") adds texture, her white skin against her white habit lying on white sheets both illuminating and washing out the actress. His three mother superiors represent three different stripes - genuine love, sadistic tyranny and sexual madness (one imagines Huppert would have leapt at a chance to have been in Ken Russell's "The Devils"). It's a beautiful period production, surprising in its emphasis on lightness over gloom. Nicloux escalates Suzanne's travails at just the right pace, wrestling his final act back from "The Perils of Pauline" territory to conclude with an shocking suggestion which brings the material's themes back to the forefront.