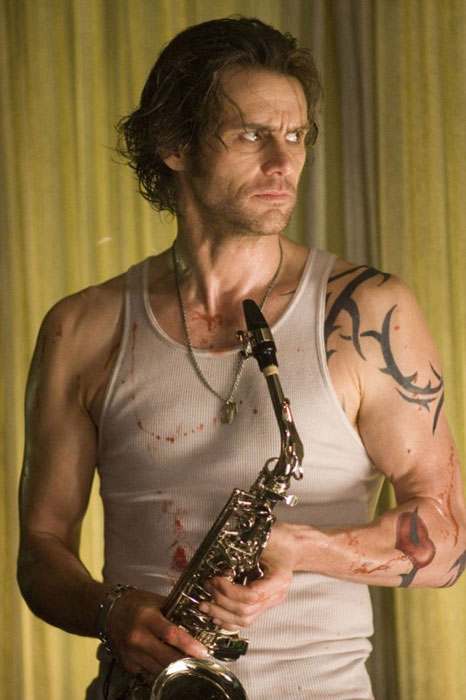 When Walter Sparrow (Jim Carrey, "Fun with Dick and Jane") begins reading the murder mystery given to him for his birthday by his wife Agatha (Virginia Madsen, "Sideways"), he finds that it parallels reality in deeply disturbing ways and he begins to share with the novel's protagonist, a detective named Fingerling, an obsession for something he begins to find everywhere - "The Number 23."

Writer Stephen King's output has run all over the quality map and, oddly enough, some of his subpar efforts have been works about writers. Novel "The Dark Half" and short story "The Secret Window," both adapted for the screen, not only show their hands early on but spring from the same idea. With "The Number 23," it's as if debuting screenwriter Fernley Phillips was too lazy to even rip off second rate King. With its glaring plot holes, over-reliance on coincidence and unexplained central conceit, it is hard to fathom why this project drew the likes of Jim Carry and Virginia Madsen. Both their stocks should drop because of it. Dog-catcher Sparrow (who, of course, lives in a sublime Arts and Crafts house) gets the last call of the day to round up a French bulldog, Ned, who slips his grasp and leads him to a graveyard. Meanwhile Angela, waiting for the birthday boy, is practically grabbed by a red book prominently placed in a used bookstore. When Walter starts to read it, he's struck by childhood events shared with Fingerling, and when Fingerling runs into the Suicide Blonde (Lynn Collins, "The Merchant of Venice"), haunted into madness by the number 23, Sparrow starts obsession too. Son Robin (Logan Lerman, TV's "Jack and Bobby") starts playing the numbers game too, but Angela pooh-poohs the idea, telling Walter to read on - he cannot possibly be Fingerling's doppleganger because the detective turns to murder. Cue creepy music. But there's nothing remotely scary or threatening about "The Number 23," which Carrey perhaps took as a chance to stretch dramatically because he gets to run around looking gaunt and acting like a tough guy. And while cinematographer Matthew Libatique (a stellar craftsman who worked on Schumacher's "Tigerland") succeeds in making Carrey look creepy, the director and the material leave the actor stranded. Carrey's not ridiculous here so much as up the creek without a paddle. The director cuts back and forth between Walter and the novel, where Fingerling dallies with femme fatale Fabrizia (Madsen, who should have known better from that character's name alone) until she dumps him for a kinkier guy. The whole thing culminates with Walter and Angela making separate ways to an old abandoned asylum at night where secrets are revealed before one of the most ludicrous 'kind of happy' endings in cinema history. "The Number 23" starts off with an intriguing numerological premise for those who like to indulge in puzzles, but it never really makes its demonic case (divide 2 by 3). So the dates of some horrible events can be manipulated into adding up to 23 as well as names and words, but Phillips never makes a case for the number causing insanity or murder. Instead he substitutes seemingly random bits of sexual kink, portentous animals and psychiatric mumbo jumbo for suspense and the director fails to make any sense out of it. Joel Schumacher, whose output ranges from horrid ("Batman & Robin," "8MM") to fairly good commercial fodder ("The Lost Boys," "Flawless," "Veronica Guerin"), has dropped another bomb on us. The film gets a few points for its stylish look, but in retrospect, I was way too kind initially grading this a C- on Reeling.