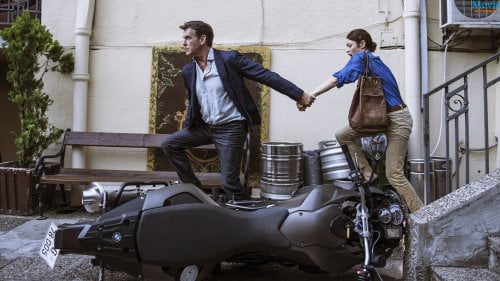 Peter Devereaux (Pierce Brosnan) is an ex-CIA spook who got out of the business years before to live in peace in Switzerland. But when he and Alice Fournier (Olga Kurylenko), a beautiful young woman with a damning secret about the president-elect of Russia, cross paths, he is dragged back into the spy business as “The November Man.”

Not having read Bill Granger's book 'There Are No Spies,' it's impossible to tell if screenwriters Michael Finch ("Predators") and Karl Gajdusek ("Oblivion") merely adapted his cache of cliches or added them in, but they certainly did little to alleviate them. We've got the retired C.I.A. agent pitted against his protege, villainous puppeteering red herrings within the CIA, a private life exposed to threaten our hero and a central mystery hiding in plain sight. But director Roger Donaldson ("No Way Out," "The Bank Job") has crafted a serviceable late summer thriller aided by the experienced Pierce Brosnan and the good looking relative unknown Luke Bracey ("G.I. Joe: Retaliation") as the trainee tasked with catching the master in exotic European locations. "The November Man" is an OK time passer. Grade:

Based on one of Bill Granger’s November Man novels, There Are No Spies, the action takes us to Belgrade, Serbia and Montenegro with its story of international intrigue involving the corrupt, soon to be President of Russia, Arkady Federov (Lazar Ristovski). Alice has first-hand proof that he instigated the second Chechen war by killing hundreds of his own soldiers. She also has evidence of even more heinous crimes. That is just one of the several stories being told by veteran helmer Roger Donaldson and scripters Michael Finch and Karl Gajdusek in their adaption of Granger’s novel. There is the mentor/protégé relationship turned bad between Devereaux and Mason (Luke Bracey), the younger spook who killed Peter’s beloved Natalia (Mediha Musliovic). There is Devereaux’s effort to save his 12-year old daughter, Lucy (Tara Jevrosimovic), from his treacherous ex-boss, Hanley (Bill Smitrovich). And there is hit girl, Alexa (Amila Terzimehic), who is single-minded in her oft thwarted attempts to kill Alice, who is not Alice but Mira. And, there are other story threads to boot. That said, the capable, experienced cast and crew, tight pace and editing and exotic Central European locales make for an entertaining thriller that does tie up all the ends. The (sort of) happily ever after ending also gives us a taste of just desserts.