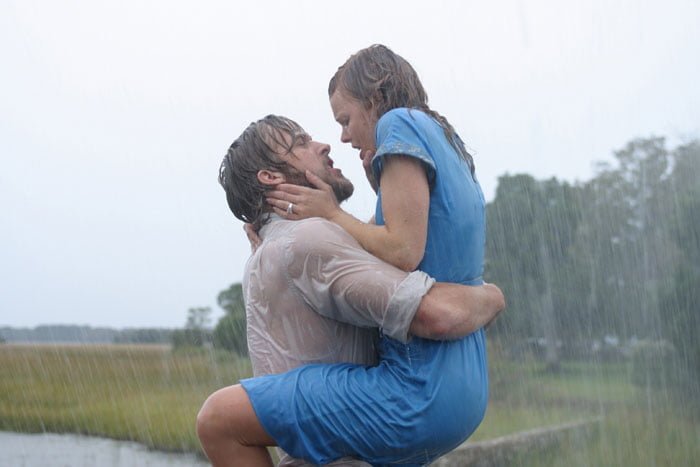 When seventeen year old Charleston society girl Allie Hamilton (Rachel McAdams, "Mean Girls") attends a carnival in her family's summertime residence of Seabrook, North Carolina, she meets a brash nineteen year old local boy, Noah Calhoun (Ryan Gosling, "The United States of Leland"), who suspends himself from her Ferris Wheel swing in order to get a date. Decades later, in a lakeside Carolina nursing home, Duke (James Garner, "The Divine Secrets of the Ya-Ya Sisterhood") will read their story to a woman (Gena Rowlands, "Taking Lives") suffering from Alzheimer's from "The Notebook."

Adaptations of Nicholas Sparks novels (screenplay by Jeremy Leven, "The Legend of Bagger Vance," adaptation by Jan Sardi, "Shine") continue on an upward curve with director Nick Cassavetes' ("John Q.") affecting love story. The director proves particularly adept with the casting of his leads - who knew the skinhead of "The Believer" would have such romantic chemistry with the lead "Mean Girl?" The film opens as an elderly woman (Rowlands) watches a flight of geese take wing over a canoe rower silhouetted in the sunset, evoking "On Golden Pond's seniors attachment to their loons. A nurse enters to prepare for bedtime, but Duke arrives to read and the action flashes back to a 1940s carnival. After Allie humiliates Noah for his cheek, he continues to pursue her relentlessly until finally, Noah's buddy Fin (Kevin Connolly, "John Q.") and his girlfriend set Allie up on an unwitting blind date. After a movie, the duo split off and connect. Noah convinces Allie to lie in the street side by side to watch a traffic light change color (a visual image which recurs until the film's conclusion). After hearing about her regimented lifestyle preparing for a tony college, Noah informs her 'That's your problem - you don't do what you want to do,' an astute evaluation which he will repeat most significantly seven years later. Allie's future is on a track set by her mother, Ann (Joan Allen, "The Contender"), who views the young mill worker as a threat. The two fall desperately in love over the summer until one climactic night when Noah takes Allie to see the run down plantation house he dreams of restoring. Talk of their future and consummation of their relationship is interrupted when Fin bursts in to tell them the Hamiltons have called the police to search for their daughter who is now out way past her curfew. Harsh words at the Hamilton manse result in a breakup which neither really wants. Then World War II calls Noah away as Allie heads to New York for college. The daily letters Noah writes for a full year are intercepted by Ann Hamilton, who is delighted when Allie is pursued by a young injured soldier she meets volunteering at a local hospital. Lon (James Marsden, "X2: X-Men United") is handsome, Southern and extremely wealthy. Meanwhile, Noah returns from the war to discover his father (Sam Shepard, "Black Hawk Down") has sold his house so that Noah can rebuild the old mansion. The completed job is so impressive, Noah's picture appears on the front of the local paper, which Allie sees as she's being fitted for her wedding gown. The edgy Gosling can now add tormented romantic lead to his resume. The young actor is tremendously appealing as a simple young man who knows what he wants and sets out to achieve it. The haunted quality he assumes during his post-Allie years is palpable, giving his affair with war widow Martha (Jamie Anne Brown) a desultory, depressed air. When Allie returns and a rain-soaked excursion resparks their romance, Gosling and McAdams turn up the heat. Both actors give the PG-13 sex scenes lusty conviction. McAdams is a revelation in her turn as the bright young girl open to adventures outside her realm of experience while staying the girl who suppresses her own needs with her ingrained instinct to do right by societal expectations. Joan Allen takes the unglamorous role of the scheming mother, until her true motivation is uncovered in an emotional unveiling to her daughter. Cassavetes regular David Thornton ("John Q."), so good in "Unhook the Stars," is a plus as Allie's permissive father John, an expansive Southerner with a Mark Twain moustache who recognizes the strength of his daughter's feelings. James Marsden is quite good as the perfect Lon, although his character is given short shrift by a too abruptly handled plot twist. It's a pleasure to watch Garner and Rowlands together, but it is the current day story that is sunk by Sparks' schmaltz. Anyone who is surprised at these character's true identities hasn't seen many movies and the truthful edge generated by healthy conflicts in flashback is dampened by greeting card devotion in the present. Still, the nursing home dementia of the elderly character is a bittersweet allegory of the separation and return recounted in the notebook. Director of photography Robert Fraisse's ("Enemy at the Gates") crisp lensing matches Sarah Knowles' pristine production design. "The Notebook" is a big old-fashioned love story with enough bite at its center to keep from being overcome by its marshmallowy coating.