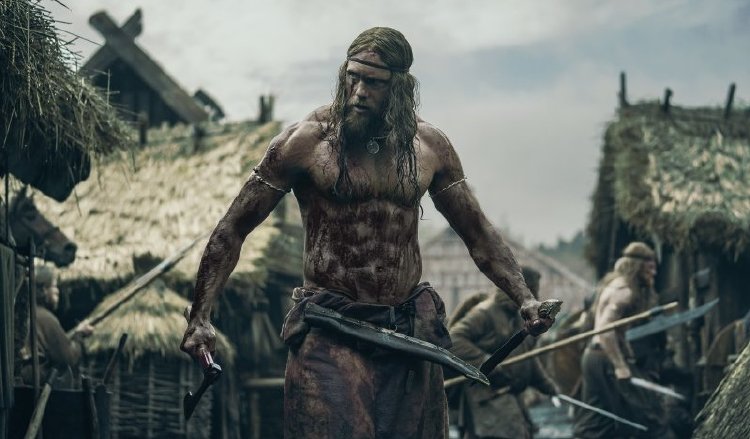 After partaking in a ritual that binds him as his father King Aurvandil’s (Ethan Hawke) loyal protector and successor, young Prince Amleth (Oscar Novak, "The Batman's" young Bruce Wayne) is horrified to see him not only betrayed, but decapitated by his uncle, the king’s brother Fjölnir (Claes Bang, "The Square").  Barely escaping while vowing ‘I will avenge you father. I will save you mother.  I will kill you Fjölnir,’ we next see Amleth (Alexander Skarsgård) as a muscle-bound wolf-bear hybrid Viking beserker who is reminded of his vow by a seeress (Björk) in “The Northman.”

Cowriter (with Sjón, "Lamb")/director Robert Eggers ("The Witch") is known the extensive research he does on his supernatural twists on historical accounts.  This time, he reaches back to the same Scandinavian legend which Shakespeare used for ‘Hamlet,’ but while the film’s craft is exemplary and its drama brutal, “The Northman” is not as memorable a film as Eggers’ prior two.  This critic recalls Nicolas Winding Refn's 2009 "Valhalla Rising" more fondly.

The problem is two-fold.  Firstly, this is a straight-out revenge tale but the disconnect between the young Amleth and The Northman he becomes is such that the latter’s ultimate victory feels deserved but hollow, drained of the emotion the younger actor brings to the screen.  Secondly there is less of that distinctive Eggers otherwordliness, relegated here to a tree of royal lineage spun by some supernatural weavers, the mound-dwelling Warrior King from whom Amleth must wrench his sword and Amleth’s final ascent into the heavens.

While Hamlet’s mother was complicit in the murder of his father, Queen Gudrún (Nicole Kidman) is carried away screaming, hence Amleth’s vow to save her.  The brawny beserker learns that Fjölnir lost Aurvandil’s island of Hrafnsey to a Norse king and has become a farmer in Iceland, and so he slips from his ‘wolf pack’ to travel there in a boat disguised among a group of slaves.  These include Olga of the Birch Forest (Anya Taylor-Joy, "The Witch"), who will become his ally and lover.

Inspecting the shackled slaves, Fjölnir declares them unworthy, ordering them to be sold, until Amleth makes a bid for attention and is kept.  His half brother Gunnar (Elliott Rose) declares his mother’s need for a laundress and kitchen help and Olga, too, is chosen.  Amleth bides his time, observing his mother from afar, convinced she is playacting out of love for her second child with Fjölnir, but soon begins to strike in the dead of night (his sword may only be unsheathed ‘at night or at the gates of hell’), causing fear on the farm.  He himself is beyond suspicion, having saved Gunnar during a game of Knattleikr (which looks like field hockey as death sport).  But after slaying Fjölnir’s eldest son Thorír (Gustav Lindh, "Queen of Hearts"), he reveals himself to his mother.  Her response is unexpected on multiple levels.

The film can be quite gory, Amleth dismembering bodies and spilling intestines, Finnr The Nose-Stub (Eldar Skar) so named because of his youthful getaway ploy, but it is not as gruesome as expected, most of his barbarism viewed in its aftermath.   Production and costume designers Craig Lathrop and Linda Muir convince of authenticity, their work organic to its landscape.  Cinematographer Jarin Blaschke’s work is stunning, whether intricately following the logistics of Viking pillaging or following Amleth’s catlike movements onto a thatched roof beneath a sky full of stars.  Music by Robin Carolin and Sebastian Gainsborough balances weighty themes with ethereal flourishes, performed with wind and instruments from Viking times.

The cast I found to be far more effective in the film’s first part, Hawke, Novak and Kidman creating a close family unit made formal by weight of responsibility.  Skarsgård is physically jaw-dropping here, but his Amleth is a single-minded beast only slightly softened in interactions with Taylor-Joy, whose accent is iffy and speech is stilted.  Bang is fine, displaying a range I was beginning to question.  Always a plus, Willem Dafoe ("The Lighthouse") is Aurvandil’s court jester Heimir, this film’s version of Hamlet’s Yorick, reappearing as a talking skull.  “The Witch’s” Kate Dickie and Ralph Ineson can be seen as Fjölnir’s housekeeper and a boat captain.

“The Northman” is a good big screen epic, but lacks in emotional investment.  “Valhalla Rising,” which this film appears indebted to, featured a far more sympathetic protagonist in Mads Mikkelsen’s One Eye.

The king (Ethan Hawke) returns home after a great victory accompanied by his brother (Claes Bang). But, there is deceit afoot and regicide is committed. The king’s young son flees for his life and vows vengeance against his father’s murderer, no matter how long it may take, for “The Northman.”

Director Robert Eggers made his feature film debut with an impressive splash with “The Witch (2015),” a wonderfully atmospheric horror story. He followed the debut with “The Lighthouse (2019),” an equally atmospheric horror movie but the horror is in the minds of the players. With “The Northman,” he eschews horror (sort of) with a study of carnage and revenge in 897 AD northern Europe.

Following his harrowing escape from his father’s murderers, young Amleth (Oscar Novak) vows revenge and sets off to fulfill this destiny. Years later, he (Alexander Skarsgard) is all grown up and a trained warrior, ready to complete his vow. This begins the tale of revenge that is not as straightforward as it might be.

Robert Eggers, well known for his attention to historical detail, does bring us a Nordic saga with elements of magic. But, the bulk of the film is about brute force and its use in smiting your enemies. Here, Alexander Skarsgard fits the bill, all pumped up on steroids (it seems), and dispatches his opponents with bloody brutality. Unfortunately, when it comes time to emote, and not hack away, he falls short, performing mostly with grunts.

As I think about it, this Hamlet-clone needs something more, like a heart and soul. “The Northman” has neither. Brutal battles alone do not make an epic. It takes a good story, too. The money is up there on the screen with elements of love and loyalty, epic battles and first-rate attention to Viking folk lore and history but a more charismatic title character would have helped – a lot