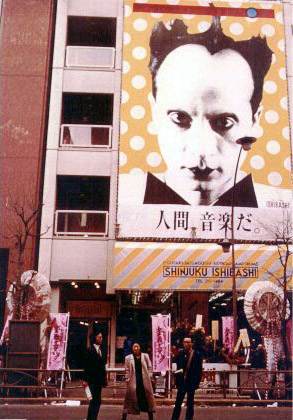 Bridging the punk era with New Wave and all their various sub-genres, the early '80's brought us some of music's most unique performers, from Boy George to Johnny Rotten, from Siouxsie Sioux to Deborah Harry. No one, however, was quite as delightfully strange as the alien-looking counter tenor who performed his own brand of pop opera in the underground clubs of New York. Klaus Nomi's altogether too brief life is celebrated by writer/director Andrew Horn (1988 documentary "The Big Blue") in "The Nomi Song."

Klaus Nomi is perhaps best known for his appearance in the movie "Urgh! A Music War" and singing backup for David Bowie on Saturday Night Live around 1980. He was a self trained opera singer who performed both classical opera, covers (like "Lightning Strikes") with unique arrangements and original pop tunes, but it was his space alien via Berlin Cabaret appearance that really made him stand out. Just as he was beginning to achieve international fame, he became one of AIDS' earliest victims. Andrew Horn's documentary is a marvel of rare footage and photographs. In fact, early video of Nomi is so rare, that Horn often has to resort to graphic overlays to hide film damage. Horn features commentary from members of Nomi's original band and other members of the scene like Ann Magnuson, all seated in front of cheesy cardboard and glitter backdrops. Horn does a nice job mixing music with interviews and voiceovers over archival footage and overhead cutaways of spinning vinyl. Several painfully inept segues, which Horn attempts to bandage with fades to black, make the film feel somewhat amateurish, however. Horn is more successful covering his budgetary restraints by accompanying the voice of Klaus's aunt, Trudy Sperber (presumably over telephone from Germany), with animated images of her in her kitchen and garden. The film is also inventively bookended with footage of a spaceship from a 1950's sci-fi flick, doctored to include the Nomi logo. Nomi's story is bittersweet. He follows the usual trajectory of the 'star' who abandons friends on his way up, but his reaching out to them at the end becomes tragic as we listen to them, one by one, say they were either too afraid of the disease to visit him or simply afraid of death itself. One of Klaus's early collaborators was a neighbor who describes hearing Nomi practicing via windows open onto St. Mark's Place. Old footage of the courtyards accompanied by that magnificent voice is perhaps the most moving part of Horn's film. The most surprising is a tossup between Nomi instructing a NYC cable access audience on the making of linzertorte or a billboard of him in a Jagermeister ad. Klaus tells the story of how his mother was angry when he spent his money on Elvis Presley's King Creole album as a young boy. She bought him Maria Callas instead. 'There I was, caught between two extremes,' he muses. "The Nomi Song" is chock full of anecdotes and performance snippets of one of the most compelling acts most people have never heard of.