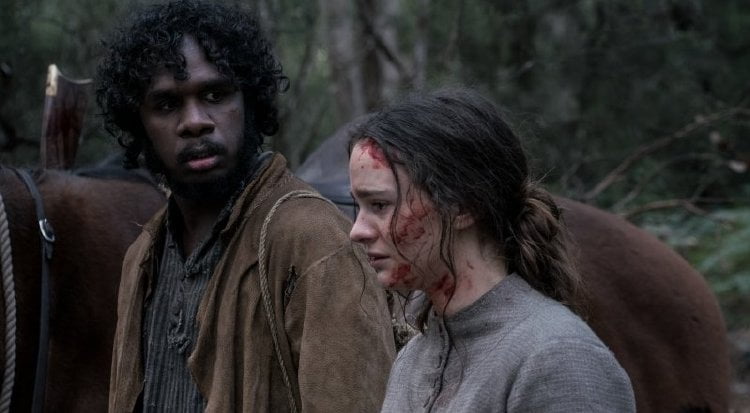 Clare (Aisling Franciosi), when just a young teen, was sentenced to prison for seven years and sent to the remote island prison of Tasmania to do time. She has fully served her sentence but her warden, Lieutenant Hawkins (Sam Clafin), who has forcibly and repeatedly raped her, refuses to set her free. Then, he and his men commit murder on her tiny family and she vows revenge in “The Nightingale.”

In 1825 Tasmania, 21 year-old Irish convict Clare (Aisling Franciosi) is desperate to be freed from the 7 year indentured servitude she has already completed for British Army Lieutenant Hawkins (Sam Claflin, "Me Before You"), a man who has been trotting her out as entertainment for his troops and sexually assaulting her despite her baby and marriage with fellow Irishman Aidan (Michael Sheasby). When her husband challenges Hawkins' power over her, unspeakable tragedy will light a white hot fire of revenge in "The Nightingale." Writer/director Jennifer Kent may not have followed up "The Babadook" with another horror movie, but that does not mean her latest isn't horrific. This brutal, shattering expose on white colonialism is far more chilling than her psychological children's book nightmare because what it portrays is a true evil. Yet for all the film's exceptional qualities - the acting, costumes, sets and locations - there is little surprise in what unfolds. The film's subplot, in which members of two oppressed groups who initially hate each other bond facing a common foe, isn't as satisfying emotionally as it should be, survival being the driving factor. That Clare's distrusted tracker Billy (Baykali Ganambarr) is Aboriginal is the only thing keeping the character from crossing over into Magical Negro territory, native Australians long associated with mysticism. The controlling Hawkins is clearly frustrated by his inability to woo the woman in his power, his gifts of cameos grudgingly accepted, a precursor to rape. She's literally a bird in a cage, singing sweetly on command (Franciosi is a classically trained opera singer) for leering soldiers. She's terrified when Aidan, who does not know her full degradation, pleads her case, but his polite entreaties are met with deaf ears. Later when drunk, Aidan assaults the Lieutenant. Hawkins is shocked when Captain Goodwin (Ewen Leslie) sides against him, calling his behavior a 'moral indiscretion' and revoking a possible promotion to a northern post. With no awareness of irony, Hawkins whines about broken promises. In their humble cabin, Aidan tells Clare he believes they'll be better off on the run, but before they can take their leave, the rage-filled Hawkins, the lecherous Sergeant Ruse (Damon Herriman, "Once Upon a Time ...in Hollywood") and a nervous Ensign Jago (Harry Greenwood) storm in. When Clare comes to, after the first of many future nightmares, the sight which awaits her would unhinge most. She keeps her wits to focus on vengeance and sets off on her husband's horse with Billy tracking Hawkins, Ruse and Jago toward Launceston, themselves using Billy's Uncle Charlie (Charlie Jampijinpa Brown) to lead them, where Hawkins still hopes to land his promotion. Throughout this adventure in rugged wilderness, Clare and Billy will learn to empathize with each other's situation (the first thing Clare sees on the trail are two Aborigines hanging from a tree; Billy notes Clare's discomfort, still lactating for her murdered child). We, meanwhile, will witness more horrors as Ruse kidnaps Lowanna (Magnolia Maymuru) for his amusement, tearing her away from her own child who is abandoned in the woods. Kent and her cinematographer Radek Ladczuk shoot in academic ratio, the square frame emphasizing characters dwarfed by the landscape. Billy's Aboriginal rites (a smoke ceremony, his dance for Mangana, his spirit bird) and Clare's increasingly disturbing nightmares lend an air of the fantastical and looming madness, Kent offering glimmers of hope in nature and Clare's Gaelic song. Franciosi is a find, fierce, her singing voice sweet, but the most astounding performance comes from Claflin, showing complex layers of villainy rooted in the fragility of the male ego like nothing we've seen from him before. Kent's film trods a well worn path, but it does so in a meticulously conceptualized production. "The Nightingale" has its flaws, but Jennifer Kent's outrage at the brutal injustice doled out to women and minorities burns through every frame. Grade:

If you are looking for a tough, gritty film about misogyny, lust, murder, rape and revenge, then ‘The Nightingale” fits the bill. Sophomore feature director Jennifer Kent (“The Babadook (2015)”) opens the Australian history book in her analysis, through the eyes of stalwart heroine Clare, of the British-installed prison system of the early 19th Century. Aisling Franciosi gives her character the fierce determination needed to believe that this young slip of a woman has the resolve to find and wreak vengeance on her long time tormentor. She forces an Aborigine tracker, Billy (Baykali Ganambarr), at gunpoint to find Hawkins in the Tasmanian wilderness, making this a journey of revenge. Clare is so compelling in her core need for revenge, you root for her to find the lieutenant and exact justice. But, this does not go as expected, for the woman and her companion must face prejudice, racism and hate. The story is about Clare and Billy bonding and uniting in their mission – Billy, later on in the story, is given the reason to willingly join Clare’s quest. “The Nightingale” makes you want Clare and Billy to succeed and to see Hawkins get his just desserts – though not in a way you would expect.