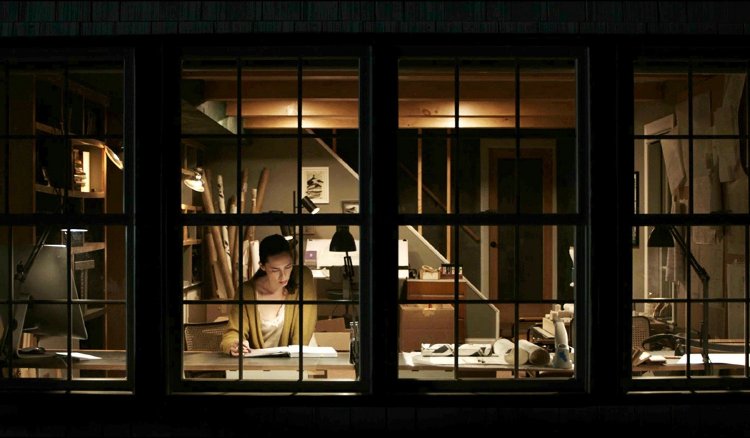 When Beth (Rebecca Hall, "Vicky Cristina Barcelona," "Godzilla vs. Kong") returns to close out the school year mere days after her husband’s suicide, her good friend Claire (Sarah Goldberg, HBO's 'Barry') is concerned, as is Beth’s widowed lakeside neighbor Mel (Vondie Curtis-Hall).  Beth immediately senses a presence in the house her husband Owen (Evan Jonigkeit) built, but the more she rummages through his things, the more she suspects he led a double life, including a mockup of their home across the lake, “The Night House.”

With a multi-layered script by "Super Dark Times" writers Ben Collins & Luke Piotrowski, director David Bruckner (of the "Southbound" horror anthology's high point, 'Accident') turns the haunted house movie inside out.  While separate building blocks of “The Night House” may have been used before, the way in which they are assembled here should keep most guessing until the film’s final act.  Fans of the cult novel ‘House of Leaves’ should be intrigued by potentially supernatural architectural mysteries while fans of star Hall will be rewarded with a carefully calibrated performance tuned to the movie’s unfolding revelations.

We first meet the just widowed woman as she returns to her home after what we assume were Owen’s funeral services, accepting a casserole but not the company of the woman who accompanied her to her front door.  When Beth goes inside, we appreciate the well planned space of the multi level home situated to take advantage of its views over a lake.  (In one of my biggest movie pet peeves, Beth dumps that casserole, Pyrex pan and all, into the garbage – seriously, does anyone do this in real life? -but we’ll see later she apparently had a change of heart and fished it out.)  As Beth walks toward the French doors leading out to a balcony, we see the shadow of a man with glowing eyes in the glass, but once the door is open, the profile remains, negative space retaken.

More overt signals that something’s not right are aural, beginning with the living room stereo receiver with a mind of its own.  Beth continually hears loud thumps, but rather than cower in fear, she always confronts them head on, sensing a presence.  A set of muddy footprints on the dock leading from the lake take on added meaning when we learn Owen shot himself out on their rowboat with a gun Beth didn’t know they had.  Then there’s that picture of a woman (Stacy Martin, "Nymphomaniac") who looks just like Beth on Owen’s phone – except that she’s wearing a blouse Beth’s never owned.  And as Claire and a couple of other colleagues will learn, Owen left a note that appears to flip the couple’s after life beliefs, acknowledging that Beth was right in believing there is nothing.  Further complicating matters are Owen’s builder’s notebook referencing mazes and reverse floor plans and an old book called Caerdroia, Beth paying more attention to both volumes when a light goes on across the lake in a house that wasn’t there before.

Bruckner amplifies all the doubling inherent in the script with Beth’s nightmares which we usually do not recognize as such until she’s awoken.  And even then, one cannot always be sure of just what is real.   The screenplay is an intricate puzzle box (with only one irritating attempt at misdirection) which ends up both confirming what Beth fears and yet completely pulling the rug out from under us with its multi-layered reveal.  Or maybe it has all been an interior journey…

Hall carries the entire film and it wouldn’t work without her tricky balancing act, one in which she yearns for a husband who she’s discovering she may not have known at all while battling her own demons, including a newly acquired taste for brandy.  Hall’s Beth starts out inherently sympathetic, but the actress isn’t afraid to flaunt flinty behavior, aggressive and confrontational with those wishing to help.  Also integral to the success of the film is production designer Kathrin Eder, whose duplicitous lake house holds surprising intentions.  Cinematographer Elisha Christian ("Columbus") pulls off eerie shots in meticulous conjunction with the FX team.

Perhaps most surprising is how “The Night House” ends, not with a ghostly chill but a warm embrace.  This is a thought provoking film, tackling mental illness, addiction and both the limits and excesses of love.