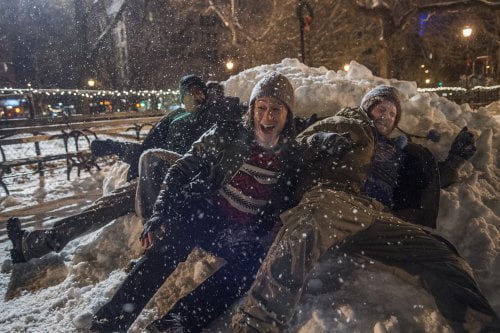 Since Ethan (Joseph Gordon-Levitt) lost his parents to a drunk driver back in high school, his buddies Isaac (Seth Rogen) and Chris (Anthony Mackie) have spent a debauched Christmas Eve with him. With Isaac now an expectant dad and Chris a rising football star, manchild Ethan, who has recently been dumped by love of his life Diana (Lizzy Caplan, "The Interview"), has to face the fact that this year might end the tradition. In order to go out on top, the trio decide to locate New York City's legendary Nutcracka Ball on "The Night Before."

Cowriter/director Jonathan Levine mixes up his "50/50" costars with Mackie, a a bastardization of the titular classic holiday poem (narrated by Tracy Morgan) with Dickens and drug-fueled comedy with holiday spirit. Each of the three men is wrestling with different aspects of adulthood and all will greet the new day wiser. Seth Rogen is balls-to-the-wall out-of-his-head here, funnier than he's been in quite some time, but the movie's MVP is Michael Shannon, who as the lads' high school weed supplier Mr. Green is the intimidating, melancholy, compassionate conduit of ghosts present, future and past. Isaac's shocked when his very pregnant bride Betsy (Jillian Bell, "22 Jump Street") presents him with an early gift - a box full of recreational drugs - and tells him to enjoy his last big blowout with the boys. More gifts arrive with Ethan, just off a job schlepping coats in the coatroom where he found three tickets to the party that has dogged them for ten years. He also provides kitschy Christmas sweaters - a Star of David set against snowflakes for Isaac, a Black Santa for Chris. The lads set off, Chris providing a Red Bull limo to ferry them around, intent on first checking off their traditional stops - the 'Tom Hanks' piano at F.A.O. Schwartz (where the boys do a killer cover of Kanye West's 'Runaway'), the tree at Rockefeller center, Chinese food and a local karaoke joint. It's the last stop that gets Isaac, already tripping out on mushrooms, into big trouble when his phone-recorded coke-fueled rant about his baby fears ends up with Sarah (Mindy Kaling) while he becomes the recipient of awe-inspiring dick pics sent by a guy named James. That's also where Ethan runs into Diana, who, as it turns out, is also heading to the Nutcracka bash and where Rebecca Grinch (Ilana Glazer, TV's 'Broad City'), posing as a sex-crazed fan, gets away with Chris's weed, scored to impress QB Tommy Owens (Aaron Hill, "Transformers: Revenge of the Fallen"). These developments allow the filmmakers to split the boys up for separate adventures, all informed by the lessons of Mr. Green's weed. Isaac, tracking his phone, ends up running into his mortified wife on the steps of a Catholic Church where he'll make Midnight Mass one to remember (and which the filmmakers remember later with a payoff joke). While the script can be shaggy (just how do these three find each other again so easily?), most of the shenanigans are pretty amusing, especially Rogen's, whose accessorized, color-banded beard in flashbacks is one of the film's best visual gags. It's also refreshing to see the guys paired up with funny women, Bell a standout. As Chris's proud mom, Lorraine Toussaint ("Selma") embodies the real meaning of Christmas. There are a couple late-breaking not-too-hard-to-guess guest stars and a game Miley Cyrus, whose 'Wrecking Ball' may be the key to romantic reunion. "The Night Before" may not be as affecting as Levine's first film, but it isn't meant to be. What it is is a rollicking Christmas comedy that circumvents sentimental goo for genuine heart. Grade: