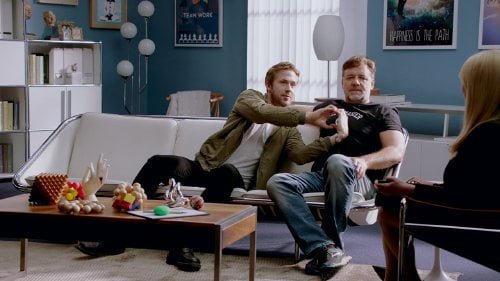 From the pointedly unrestored Hollywood sign to the smog alerts, gas shortages and the can of film all pointing towards the case's (less than scintillating) resolution, cowriter (with Anthony Bagarozzi)/director by Shane Black's ("Kiss Kiss Bang Bang") possible franchise starter is steeped in the 70's and the hilarious odd couple pairing of Gosling, showcasing a talent for physical comedy, and Crowe, amiably relaxed as his straight man. The film's also a boon for up and coming talent, Angourie Rice making a strong impression as March's wiser-than-her-years daughter Holly, Lance Valentine Butler stealing his one scene as a kid on a bike with his ear to the ground and his hand outstretched. Mind you, both engage in some seriously R-rated dialogue. Young Bobby (Ty Simpkins, "Jurassic World") crawls beneath his sleeping parents' bed to retrieve dad's porn, grinning at the centerfold of the aptly named Misty Mountains (Murielle Telio, "The DUFF") as a car plummets off a mountain road seen through a window behind him. The vehicle crashes through his house, careening down a hill. Racing to the accident scene, Bobby finds the woman he was just looking at in almost the identical pose. 'How do you like my car, big boy?' she whispers in her last breath. Black's tricky script continually throws out seemingly random little bits of color like this, later unveiling them as important clues. March is introduced professionally with a new client who wants to hire him to find the husband, Fred, whose urn sits on her mantle, so when the obviously sight-challenged Mrs. Glenn (Lois Smith, "Twister") insists she saw her niece, Misty, two days after the actress's death through the window of the woman's apartment, we discount her right along with him. March and Healy, who meet when Healy breaks March's arm for tailing the woman he's been hired to protect (Amelia), find themselves questioning a protest group playing dead from pollution, at the burned down house of a filmmaker and at a wild party whose porn producer host they find dead (the corpse looking suspiciously like Robert Downey Jr.) all the while being chased by Blue Face (Beau Knapp, "Southpaw"), his right hand (Keith David, "Crash") and the big gun, John Boy (Matt Bomer, "Magic Mike XXL"). March's daughter Holly is their inadvertent mascot, unshakeable and, ultimately, crucial to solving the case (March uses his tween daughter as his driver because he's usually inebriated). Gosling uses his character's drunkenness for some classic comedy, whether punching out a window, trying to intimidate from a toilet seat or falling off a balcony. (If there's a skeevy aspect to his behavior given his young daughter, Black redeems the character somewhat with a tragic back story.) The latter stunt is repeated in the film's last act, culminating with an astounding splash/splat overhead shot. The brilliantly conceived L.A. auto show climax is like a Rube Goldberg action piece. As Gosling's odd couple counterpart, Crowe's never seem more relaxed on screen, shuffling his bulk around, genially intimidating or amusingly sheepish when the odds stack too high against him. Knapp is like a comic book super hero villain, dubbed Blue Face for not heeding a warning about opening a bag spring loaded with ink. Bomer, named for his Walton-esque mole, is a charmingly slick terminator. Kim Basinger, whose name appears high in the credits, only appears in two scenes, adding little to either. While the script is clever in its construction, we never do get to see the film-within-the-film that's caused so much mayhem. Still this modern day comedy noir is all about its nice guys and their 'Nancy Drew if she hung out with porn stars and hookers' apprentice. The soundtrack, which features Earth Wind & Fire, The Temptations, Kool and The Gang, Al Green, Herb Alpert & The Tijuana Brass and America, is an added plus. Grade: