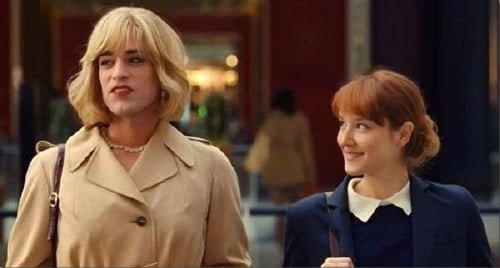 Claire (Anaïs Demoustier, "The French Minister") has been best friends with Laura (Isild Le Besco, "À Tout de Suite") since they were six years old. When Laura marries David (Romain Duris, "The Beat That My Heart Skipped"), Claire's a bit jealous until she, too, finds her own husband in Gilles (Raphaël Personnaz, 2012's "Anna Karenina"). When Laura dies not long after giving birth to Lucie, Claire falls into depression until she discovers the secret Laura kept that births "The New Girlfriend."

When writer/director François Ozon ("Swimming Pool," "In the House," adapting a Ruth Rendell short story here) initially unveils his film's big surprise, one almost expects a light farce to follow despite the film's switcheroo of an opening that suggests wedding before revealing funeral. But Ozon's got something much deeper and a little darker on his mind here and by the time his film hits its midpoint, he's playing at "Vertigo" with a touch of "Rebecca," the film's cross-dressing and lurid sexuality more of a De Palmaesque tribute than vintage Hitch. There's even a bit of Preminger's "Laura," the deceased character whose portrait hangs in her family home's spirit hovering throughout. Romain Duris playing a man playing at being a woman is startlingly sensual in the best performance of his career. Claire's funeral eulogy for her friend segues into a decades skipping montage that establishes the tight bond between Claire and Laura, one which suggest Claire may have felt more than friendship. Gilles supports his wife through her grief, prodding her to visit David and her godchild. When she finally feels up to it, she walks in and is shocked to find David in a blond wig, dressed in Laura's clothes, feeding his child. He tells her Laura knew of his predilection, but he didn't feel the need during their marriage. A week after her death, her clothes gave him comfort and his old habit reemerged. Gradually, Claire not only gets more comfortable around David dressed as a woman, she finds it a bit of a turn on, putting lipstick on Gilles and admiring him in her scarf. She takes the man she's dubbed Virginia out in public for the first time on a shopping excursion and lies to Gilles to spend a weekend at Laura's country home. But when Claire and Virginia's closeness turns physical, she does an about face once again - this time for his being a man. Ozon's latest is a fun house mirror of a movie, constantly playing with doubles (even literally in a 'doubles' tennis match arranged by Gilles) and circling back on itself (the film's ending is an inverse of its beginning). Even the casting reflects this, Duris's strong jaw echoed in Le Besco's. The film is both light and dark, its powerful midpoint at disco club Amazone a celebration of acceptance, Claire and Virginia's sexual encounter a harrowing rejection. Pascaline Chavanne's ("8 Women," "Gemma Bovary") costume design parallels Claire's metamorphosis along with David's, her utilitarian business outfits giving way to feminine dresses. Duris is astonishingly good here, tempering his feminine tendencies as a man, slipping into sensuality as a woman (his reaction to drag performer Eva Carlton's (Bruno Pérard) 'A Woman With You' is truly touching). The fresh faced Demoustier makes Claire the less vibrant of both her significant relationships, panicking in a gender confusion of the heart. The film also stars Aurore Clément ("The Bridesmaid") as Laura's mother. With "The New Girlfriend," François Ozon has created a love triangle of two. The film could perhaps have gone deeper emotionally, but the director has told his story with such artfulness, it's a suspenseful, astonishing experience. Grade: