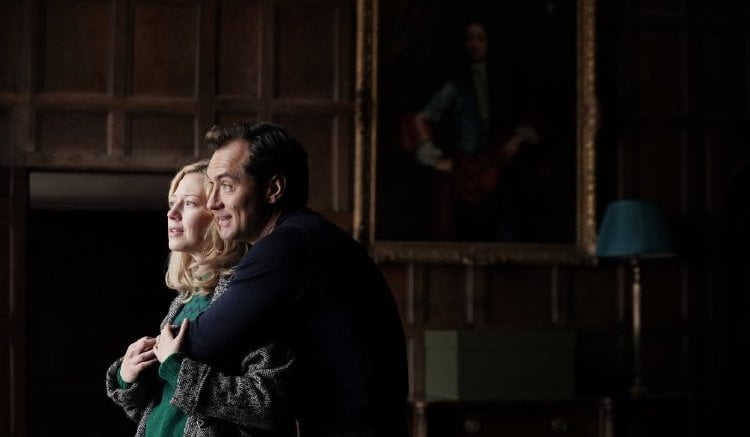 Rory O'Hara (Jude Law) is used to being a Master of the Universe, so when his fortunes dry up in New York, he calls his old boss Arthur Davis (Michael Culkin, "The Good Liar") in London.  Rory’s American wife Allison (Carrie Coon) isn’t happy about uprooting their family and moving for the fourth time in ten years.  Then she sees the 18th century manor house with a stable being built for her gorgeous new horse and admits she is happy that Rory is feathering “The Nest.”

Nine longs years after his 2011 debut "Martha Marcy May Marlene" writer/director Sean Durkin returns with another unsettling film whose surface belies what lies beneath.  This one is a slower burn, marital discord not as horrific a burden as cult murder, but it is meticulously plotted and produced, its stars at the top of their games.

In the U.S. set opening, it is Rory who takes Benjamin (Charlie Shotwell, "Captain Fantastic”) and Samantha (Oona Roche) to school while Allison teaches at a riding school (Hers? Unclear…).  There is a Jeep and Mercedes parked outside their low slung, expansive ranch nestled amidst leafy surroundings where Rory seems to spend most of his time.       When Allison objects to being uprooted, Rory accuses her of being risk averse, telling her that he is unfulfilled here and the deal awaiting him in London will make them very, very rich.  In the background, President Reagan can be heard on the TV.

Across the pond, Allison pulls up with the kids in a cab, startled to see the huge, antique home that awaits them, the type one sees in Masterpiece Theater.  It is stone with soaring, Gothic windows, its interior all dark, carved wood panels.  ‘It’s too big,’ Allison objects and she is right, but when she sees the stunning horse Rory’s purchased for her with room to keep it on their own grounds, she’s won over.  Then there’s the chinchilla coat…and a renewed sexual spark.

But now it’s Allison who drives the kids to school, Benjamin to a very prestigious one, teenaged Sam to a lesser one.  At a work event, Rory’s treated as the prodigal son, but as time goes by his behavior takes on an air of desperation.  And with one small comment, we learn that his wooing was a lie, that he made the overture to Davis.  The essential component of a marriage – trust – is further broken when Allison insists Rory leave their bedroom before opening her secret cash stash, his promised big payday well overdue.

As we observe Rory’s gift of the glib collapsing, Durkin illustrates how the unspoken rot eats away this family.  Sam (whose appearance is so unlike her costars, I thought she was Ben’s nanny) acts out in the usual teenaged ways as Ben curls up in the attic.  But on either side of the Atlantic, it has been the pent up energy of high strung horses that has set an anxious tone and Allison’s Richmond will symbolize everything.

Durkin and his production designer James Price (“Paddington 2’s” art director) choose a muted, autumnal palette which both cloaks and disquiets.  The setting is firmly set by a soundtrack which features The Psychedelic Furs, The Thompson Twins, The Cure and Bronski Beat.  Durkin’s screenplay exploits the nationalities of his couple, the more brash American approach bubbling up more in public, English reserve more evident in private.  This aspect is underlined in Law and Coons’ performances, Law using more outlandish techniques the more he’s backed into a corner, ultimately alienating close colleague Steve (Adeel Akhtar, "The Big Sick") while Coons lets fly with hard truths at an important business meeting.  They’re both electric.  The film also features Anne Reid (TV's 'Last Tango in Halifax,' 'Years and Years') as Rory’s mother, giving us some tart, unvarnished background on her character’s son.

“The Nest” deflates a bit in its conclusion, as if it’s gone back to square one, but it is a memorable portrait of a marriage that hasn’t been honest with itself for quite some time

Rory O’Hara (Jude Law) announces to his wife, Allison (Carrie Coon), that, though a successful business man in the US, things are just “not right.” Then, he tells her that he has taken a job, in London, working for his old boss, and rents an enormous estate to re-spark his entrepreneurial spirit and make more money. But, it is all a sham in “The Nest.”

The impression I got when I watched the trailer for “The Nest” is one that has become the norm, of late, for horror movies. A family, usually trying to heal from some tragedy, moves into a remote, imposing edifice and the house begins to take over the family.

That impression was wrong - “The Nest” is not a horror movie. Instead, it is a character study of a family whose life may not be as it seems and not a “house possessing a family that cannot get away” horror flick.

As the story unfolds, Rory, Allison and their two kids, Samantha (Oona Roche) and Ben (Charlie Shotwell), make the move to their new, and far too large, estate to start their new life. What begins to occur, though, is we see Rory’s true colors and all the lies and bluster that have been the bulwark of both his career and family life. The cracks in that career become apparent to Allison but she, and her kids, Samantha (Oona Roche) and Benjamin (Charlie Shotwell), are helpless in there isolation and can do little about it.

Carrie Coons gives a compelling character study of a woman who, yanked from her home, business and comfort zone in America, realizes that husband has been a fake, leeching off of others, especially Allison, to finance his get rich quick schemes and “it takes money to make money” philosophy.

Jude Law, as the always-conniving Rory O’Hara, does not get much by way of character development. Once you realize that his life is based on bluff and bluster, not talent, you see that Rory does not change. Coons, on the other hand, has a solid arc as she goes from the naïf who believed Rory for so many years to a woman who realizes her life was a total fake and is forced to do something about it.

My only question is: why did it take Allison so long to figure out her husband is scum? Maybe it is a statement on our complacency of how things are and how that changes with comfort level. Or, maybe it just says men are scum.