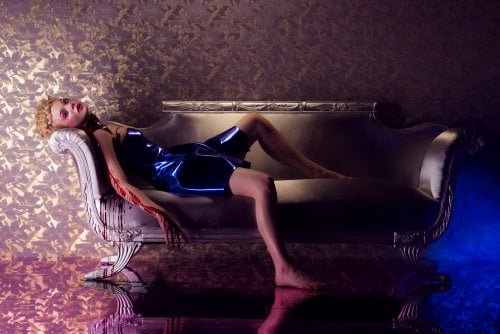 Beautiful, young Jesse (Elle Fanning) ran away from home and journeyed to Los Angeles to begin her modeling career. Her perfect features, the envy for LA plastic surgery, garner her attention right away. But, other beauty-hungry models conspire against the innocent Jesse to ruin her career, and much more, in “The Neon Demon.”

Jesse (Elle Fanning, "Maleficent") is a sixteen year-old from Georgia with no family who immediately makes a splash at an L.A. modeling agency. She's befriended by makeup artist Ruby (Jena Malone, "The Hunger Games: Mockingjay - Part 2"), who introduces her to the competition at a party where the four are, oddly, the only ones to attend a strange bondage performance. When Jesse turns to Ruby for help, that performance takes on a whole new meaning when she's introduced to "The Neon Demon." Since its Cannes premiere, writer/director Nicolas Winding Refn's (the "Pusher" trilogy, "Drive") latest has been controversial, accused of misogyny among other things. But this metaphor for Hollywood itself, where youth and beauty are a commodity ripe for exploitation, is a horror film, and as such it accomplishes what it's set out to do. The production is as slickly stunning as an edgy fashion layout, L.A. locations from a seedy motel to Silver Lake's Paramour Mansion charting the road to success - at a price. The first glimpse we get of Jesse is a disturbing one. She's artfully draped over a sofa, wearing high fashion and a slash across her throat, blood traveling down her arm, pooling on the floor. But cinematographer Natasha Braier's ("The Rover") camera pulls back to reveal amateur photographer Dean (Karl Glusman, "Stonewall") snapping away. Agency owner Jan (Christina Hendricks, "Drive") will dismiss the photographs, but she's clearly excited by Jesse, advising her to always state her age as 19. In a makeup room, Ruby apologizes for staring, admiring Jesse's flawless skin, then tells her 'that little deer in the headlights thing is just what they're looking for.' After introducing the fresh-faced teen to Gigi (Bella Heathcote, "Dark Shadows"), a model with a taste for plastic surgery and sarcasm, and Sarah (Abbey Lee, "Mad Max: Fury Road"), her antennae up and her jealousy obvious, Ruby notes that women tend to buy lipsticks if they're named after food or sex. 'Are you food or sex?' she asks Jesse. We won't know until later how loaded that question really is. The innocent young girl survives her first shoot with superstar photographer Jack (Desmond Harrington, TV's 'Gossip Girl,' Showtime's 'Dexter'), who asks her to strip but treats her like a prop, then wows fashion designer Robert Sarno (Alessandro Nivola, "Face/Off," "American Hustle") who rejects Sarah at the same audition. Dean is sweetly supportive, wooing the girl cautiously once he learns her age. But there are big cats and wolves circling, including Hank (Keanu Reeves), the manager of Jesse's seedy Pasadena motel. But if the men don't feed on you, the women just might. Fanning is perfectly cast here, a blank canvas awaiting the touch of an artist. With every bit of professional approval, we see a satisfied smile flirt around the edges of her mouth. The adulation goes to her head until she eventually sells her soul to the devil, but her refusal of the demon's very own Countess Bathory seals her fate. The last act of Refn's film is extreme, featuring lesbian necrophilia and cannibalism, but even these scenes have a perverse beauty. Refn's last scene is a stunner, Gigi and Sarah looking more like soulless bloodsuckers, alien insects, than ever. Lee is particularly compelling, devolving into a sad husk until rejuvenation brings her back into the game. Nivola is hilarious, the designer recognizing greatness, almost orgasming as he watches Jesse's runway strut. Production Design by Elliott Hostetter ("Spring Breakers") makes great use of photographer's paper, creating white spaces in which Refn's characters exist in a bubble of perfection. Costume Design by Erin Benach ("Drive," "Lost River") follows Jesse's arc, from the innocence of apricot and aqua to harsher black leather and halters. Cliff Martinez's ("Drive") electronic score marries elements of horror and high end nightclubs. "The Neon Demon" certainly won't appeal to all tastes. But for those who can stomach regurgitated eyeballs, it's an allegorical hoot. (On a side note, those appalled by the idea of necrophilia as cinematic subject matter are advised to look up 1996's "Kissed.") Grade:

For three quarters of “The Neon Demon,” the tag line for the film is made by fashion designer Robert (Alessandro Nivola) when he says, “Beauty is not everything; it is the only thing.” The story follows naïve Jesse, whose natural beauty and innocence opens doors for her among the industry’s elite. But, those doors are rife with peril from the veteran models that see Jesse as a dangerous threat to their own careers. So, we have a film, like “Showgirl” (without the comedy sex scenes) and “Valley of the Dolls (1967),” about an ambitious young woman breaking into the dog-eat-dog world of professional modeling. Then, at said three-quarters mark, writer/director Nicholas Winding Refn takes a left turn, story-wise, and walks “The Neon Demon” off the map. I did not like the change in direction and was turned off by the necrophilia that rears its ugly head and other disgusting things during the last quarter of “Neon.” But, others seemed to enjoy the sick turn of events, so this is the kind of movie you have to see and judge for yourself. I was offended by Refn’s constantly ramping up of the misogyny. I understand that the industry is, by definition, misogynistic, but the director brings objectification of women to new heights.