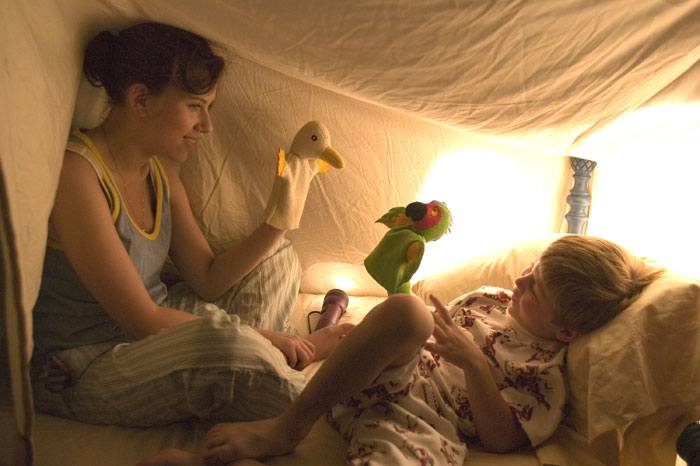 Annie Braddock's (Scarlett Johansson, "Scoop," "The Prestige") mother Judy (Donna Murphy, "World Trade Center," "The Fountain") has sacrificed so that her daughter could succeed in the world of finance, but Annie's interests lie more towards her college minor, anthropology. Floundering trying to enter the job market, Annie makes a snap decision to follow through on an unexpected job offered by a woman who misheard her introduction and Annie documents all in "The Nanny Diaries."

Of all the studio explanations for shifting film release dates, the Weinsteins' decision to move this from spring to fall to position it for Oscar consideration is one of the most laughable on record. Perhaps they realized this when they moved it up again into a late August time slot. With the exception of Laura Linney's ("Jindabyne," "Breach") perceptive portrayal of Mrs. X, an upper East Side woman trying to hang onto her marriage and its consequent position in society, everything about this film falls flat beginning with Johansson's lead performance. Cowriter/codirectors Shari Springer Berman and Robert Pulcini ("American Splendor") attempt to bring a bit of the overlapping reality/fantasy whimsy that so marked their highly praised "Splendor," but in "Diaries" it feels forced, beginning with the Museum of Natural History exhibits which evolve from the beginning of man into specific types of the modern day including a perfect ethnic rainbow of nannies and the uptight, bitchy women who employ them. A Mary Poppins red umbrella homage, straight from the cover of Emma McLaughlin and Nicola Kraus' source material, is misplaced and unearned. (That cover is prominently featured late in the film as mother-in-law X's beach read - another fantastical groaner.) Annie is courted by Mrs. X and falls for it, lying to mom about her new job and rationalizing to best friend Lynette (singer Alicia Keys, "Smokin' Aces"). Before anyone can say 'I told you so,' Annie is faced with the reality of an acting out charge, Grayer (Nicholas Art, "Syriana"), tired of the evolving door of nannies he has had, and a boss who immediately sets class limits and finds ways to blame Annie for all her marital woes. As the Jersey girl observes the Upper East Side life, however, two things happen - she gains Grayer's trust and feels sorry for Mrs. X's pathetic life, despite constant humiliations. She also meets Harvard Hottie (Chris Evans, "Fantastic Four: Rise of the Silver Surfer," "Sunshine"), a nice guy in the X's building who is forbidden but irresistible (and whose pursuit of Annie, especially as played here, is the stuff of fairy tales). Unfortunately, she also eventually attracts the attention of Mr. X (Paul Giamatti, "American Splendor," "Lady in the Water"), a subhuman toad of a man, that will result in the most unbalanced retaliation yet - until, that is, Annie strikes back with happily-ever-after effect. Johansson plays Annie as a bumbling naif without ever evoking empathy or sympathy for the character - only the situations themselves stun (and were far more expressively played on the chick lit written page). Young Nicholas Art does well enough playing it down the middle, but we don't feel the bond between him and Johansson - Berman and Pulcini's final illustration of him likened to his briefly owned puppy inadvertently nails the depth of the relationship. Giamatti, sporting some short, red fluff on his head, is a cartoon, introduced like one of those Peanuts' adults whose faces are never seen, gradually revealed as nothing but a wealthy, entitled suit. Only Linney, a fine actress adrift in a fatally flawed production, brings any interest to the screen as a struggling Stepford wife with a misguided soul.