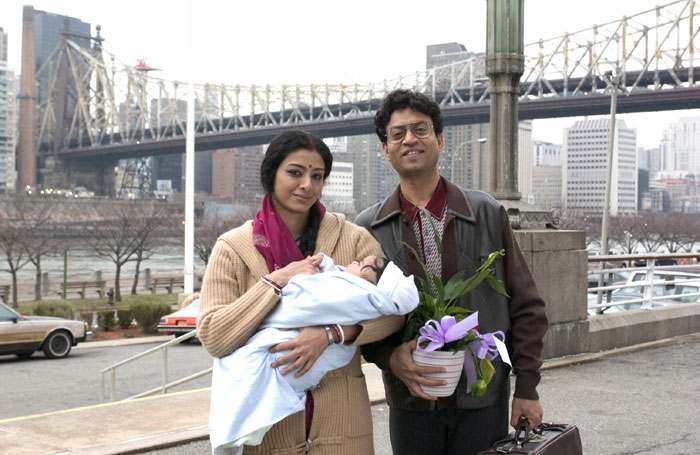 As a Bengali student, Ashoke Ganguli (Irfan Khan, "The Warrior") revered the work of nineteenth century Ukrainian writer Nikolai Vasilievich Gogol ('The Inspector General,' 'The Overcoat'), but it was the advice of a man on a train that prompted the young man to see the world with his own eyes. Returning home from his newly adopted New York City, Ashoke is wedded to Ashima (Bollywood actress Tabu) in an arranged marriage and brings her with him to a strange new land. When their son is born and they cannot leave the hospital without a name on his birth certificate, Ashoke remembers Gogol and the young Ganguli becomes "The Namesake."

Director Mira Nair ("Salaam Bombay!," "Monsoon Wedding") knocks one out of the park after her last two disappointing efforts (her "11'09''01 - September 11" segment, "Vanity Fair") with Sooni Taraporevala's ("Mississippi Masala") terrific adaptation of Jhumpa Lahiri Pulitzer Prize winning first novel. Simply put, "The Namesake" is one of the best films about family, heritage and identity to hit the big screen in ages. Bollywood stars Irfan Khan and Tabu are incredibly empathetic in performances spanning three decades. Ashoke is content experiencing the world through books until a horrible accident brings the words of a stranger home. A short skip in time later and Ashima is slipping her feet into a pair of American made shoes while she waits to meet a potential husband. 'Can you be alone in a cold city with freezing winters?' she is asked. 'Won't he be there?' she replies. One exotic Bengali wedding and a trip half way around the world later, Ashima finds herself in a snowy land of Rice Krispies and public laundromats. After Gogol comes daughter Sonia (Sahira Nair, "Monsoon Wedding") and a move to a Bengali enclave of suburbia, a quick cut (editor Allyson Johnson, "Monsoon Wedding") introduces us to the teenaged Gogol (Kal Penn, 2007's "24") and it is a shock to see a whining young American in the Gangulis kitchen. A cut later and the "Harold & Kumar" star is smoking pot and explaining his name to his classmates. A graduation gift of Gogol's collected works from his father is shrugged off with a mumbled thanks. After a summer family trip to India, we next catch up with Gogol using his 'good name' of Nikhil as a successful NYC architect and fiance of wealthy and WASPy Maxine Ratliff (Jacinda Barrett, "Ladder 49," "Poseidon"). Mother Ashima cannot reach him by phone and, with Sonia at a west coast college, suffers a second profound loss of family. It is this section of the book, 'Nikhil's' years with Maxine, which Nair and Taraporevala wisely pare back upon, giving equal weight to Gogol's eventual marriage to the Bengali woman he mocked as a teen, the stunning and sophisticated Moushumi Mazumdar (Zuleikha Robinson, "Hidalgo," HBO's "Rome"). But it is a credit to the intricate storytelling that is "The Namesake" that what worked so well in one culture - the arranged marriage of Ashoke and Ashima - does not necessarily hold true when transplanted into a new one. Gogol is "The Namesake" and epicenter of the book, but the filmmakers give perhaps more weight to his parents. As Ashoke, Irfan Khan is perhaps a little more hip than he was on the page, but his interpretation works marvelously. Khan makes Ashoke a wise and gentle man whether coaxing his young bride from tears into laughter after she shrinks his clothes or taking his five year old son by the hand to look past the horizon from a rock pier. After years of marriage, he dares to ask his wife why she chose him and her coy response gives him all the answer he needs. Reserved in public (Gogol warns Maxine not to tough him when she meets his parents), but sensual in private (one lovemaking scene, beautifully shot by cinematographer Frederick Elmes ("Blue Velvet," "Broken Flowers")), the Gangulis strong love for each other does not need to be stated. Tabu is the backbone of the film, a loving mother who learns independence in America. Kudos to the makeup department of Kelly Gleason and Heidi Kulow who do a wonderful job aging the two actors (not to mention transforming Robinson from unibrowed bookworm into exotic beauty). If there is a weakness in "The Namesake," it is that Zak Penn, while very good as Gogol, gives the occasional false or actorly line reading, a small nitpick born of dramatic inexperience, and Jacinda Barrett is little more than window dressing, a representative ideal, and her character is given no sympathy here. Better are Robinson as the conflicted Moushumi, whom Penn works well together with, as he does with Sahira Nair as his very American sister. In a small role as Ashima's American work friend, Brook Smith ("The Silence of the Lambs") makes a strong impression. Praise too should go to production design, art direction and set decoration, which encompass everything from a NYC walkup to 1970s suburbia, old Bengali homes and modern day airports. Pathos is achieved by the sterility of a Cleveland apartment, the placement of a pair of shoes reflecting on an earlier time. Original Music by Nitin Sawhney is lyrical but never manipulative. "The Namesake" achieves just what Ashoke's uncle says books should do - it transports its audience to other worlds and other lives. It is a richly rewarding journey.

Ashima (Tabu) and Ashoke (Irrfan Khan) get married in India and the couple, the product of an arranged marriage, set off to their new home in New York City. Isolated from their distant homeland, the young pair gets to know each other and, soon, have their first child. Custom dictates that a name be carefully selected for the baby, a process that could take years. So, for the sake of American bureaucracy, Ashouk dubs his son, temporarily, Gogol, in “The Namesake.” The Ganguli’s live the American dream with Ashoke working hard to pay the bills and provide for his growing family. Ashima stays home with their two kids, Gogol (Kal Penn) and Sonia (Sahira Nair), as they grow into normal, sullen American teenagers. Ashima and Ashoke are especially concerned with Gogol, who resists his parent’s culture, eventually becoming the boyfriend of Maxine (Jacinda Barrett), a young woman decidedly NOT Indian. Gogol’s decisions to ignore his family heritage deeply concerns his parents, who would love it if he took up with a nice Indian girl. But, they give their son his space, hoping that he will eventually embrace his culture. It takes a tragedy, though, for Gogol to find himself. Helmer Mira Nair, well known for her personal, family-focused films like “Monsoon Wedding” and Salaam Bombay!” takes on the best-selling novel by Jhumpa Lahiti for her latest. Adapted by Sooni Taraporevala, “The Namesake” is a touching story of familial love and loyalty that spans decades and is a showpiece for Bollywood faves Tabu and Irrfan Khan. These two veteran actors envelope themselves in the lives of their characters, spanning decades as they grow more in love every day. Though they steep their lives in their cultural heritage, they balance this living the hard-working life as Americans, and the actors are convincing. Kal Penn, though not the equal of his onscreen parents, is developing into a competent young actor. His stoner dude in “Harold and Kumar Go to Whitecaste” contrasts with his deadly terrorist in last season’s 24,” showing he has range. Gogol represents a middle road for Penn and he does a competent job in growing his character as he copes with his duel identities. The rest of the large supporting cast help to give The Namesakes” cultural diversity as the Ganguli’s family drama unfolds. Techs are rock solid, especially the beautiful Indian location photography, by Frederick Elms, which uses an up close and personal look at and into the famous Taj Mahal as its centerpiece. Costume is beautifully handles with a great eye for color and visual style from Arjun Bhasin. The makeup department’s Kelly Gleason and Heidi Kulow do a wonderful job aging Ashima, Ashoke and the rest, showing the subtle changes of aging as the years go by. The Namesake” is probably not the kind of film to attract the 15 to 24 male demographic – they’re still lining up to see “300” – but it does have thoughtful appeal for the mature moviegoer. Mira Nair proves, once again, that she is a world class filmmaker.