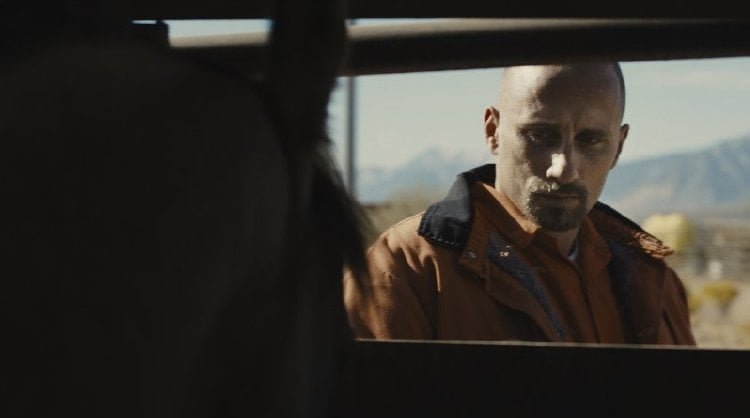 Roman Coleman (Matthias Schoenaerts) is doing time in an arid Nevada Department of Corrections facility. A loner with an uncontrollable temper, he is recruited, reluctantly, into a state program to train wild horses for border police and ranchers. This assignment proves a catalyst of change for the man and “The Mustang.”

During a pre-classification meeting at the Northern Nevada Correctional Center, a psychologist (Connie Britton) can barely get a word out of inmate Roman Coleman (Matthias Schoenaerts). When he finally mumbles that he’s ‘not good with people,’ she assigns him to outdoor maintenance. He catches the attention of Myles (Bruce Dern), the horse trainer who runs the wild horse training program when he enters the stall of a ‘real crazy one’ without suffering consequences and is recruited to train that same horse, “The Mustang.” This first feature from cowriter (with Mona Fastvold, Brock Norman Brock)/director Laure de Clermont-Tonnerre is a moving docudrama so realistic I was surprised to learn the other prison inmates were actors. Schoenaerts is perfectly matched to this role, a physically imposing man with sad eyes whom the actor convinces us could erupt into violence at any moment. The film shines a light on both the horrific government helicopter wrangling of these beautiful animals and the dually beneficial training program which rewards patience, sensitivity and empathy with the trust of a wild mustang. We are surprised when Roman has a visitor. Martha (Gideon Adlon, “Blockers”) is his pregnant sixteen year-old daughter and Roman is not pleased to see her. She’s come for his signature and gets it, although he doesn’t bother to read what she’s brought. He tells her not to come back. But she does, stating that he failed to initial a part of the document, prompting him to actually look at it. It is an emancipation letter Martha needs to enable her to sell her grandmother’s house. De Clermont-Tonnerre follows these two parallel relationships, Roman naming his horse Marquis (which he pronounces ‘Marcus’) after reading an article about an 18th century Marquis’s horse training techniques. Roman is so initially frustrated by his experiences in the training ring, he resorts to actually punching the horse, an act which is met with a stern rebuke from Myles. Yet at the same time Myles also gifts Roman with jeans and a jean jacket as a reward for the inmate’s calm handling of the terrified Marquis when the prisoners were called out the night before to bring them to shelter from a serious storm. The eventual breakthrough between man and beast is incredibly moving, the mustang comforting Roman just when he thinks the horse has beaten him. This advancement flows right into Roman’s relationship with his daughter, fractured by Roman’s guilt and Martha’s burden from his crime. The film refuses to succumb to sentimentality, however, De Clermont-Tonnere offering no easy solutions in either storyline. The film encompasses so much more - the effect of solitary confinement, drug culture and its attendant violence in prisons (Roman is forced to steal horse tranquilizer for his cellmate) and the benefit of dedicated counselors (Britton and the paternal Dern). The film also stars “Mudbound’s” Jason Mitchell as Henry, the prison’s best trainer who takes a special interest in Roman. The production gains authenticity from shooting at the decommissioned Nevada State Prison surrounded by miles of desert. Director of photography Ruben Impens juxtaposes this vast expanse with the claustrophobic prison spaces, wide shots encompassing the beauty of the free wild horses, hand held camera creating intimacy between man and beast. Grade:

Aside from seeing the trailer for “The Mustang,” I knew little of the film or the program going in. I came out thinking, “That was a really good movie!” The reasons are several. First is Matthias Schoenaerts as Roman, who is a raw bundle of anger and rage, aimed at others and himself. We meet the man as he is being interviewed by a prison psychiatrist (Connie Britton) and learn that he is being moved from isolation to the general prison population. Roman responds to the move, saying, “I’m not good with people.” His first job is to shovel the copious amounts of horse manure produced by the equine inmates of the state’s wild horse training program. He is attracted, while working, to the noises emanating from a nearby shed. Inside is a particularly bad tempered and violent mustang. Surprisingly, the animal calms with Roman’s approach. The chief trainer, Myles (Bruce Dern), takes him into the program. This parable about man and beast follows a routine formula of the main characters’ metamorphism from violent untamed beasts, both full of anger, to a team that help each other to redemption – almost. The formula may be routine, but the execution of that formula is what makes “The Mustang” a cut above the usual inspirational drama. The film opens on the vast western plains where wild horses roam freely. Suddenly, the peace is shattered by a low flying helicopter that begins herding the animals to captivity. Title cards at the beginning succinctly sets the stage for exactly what the wild horse training program does – save some of those horses culled for the rest to become rehabilitated members of society, like the prisoners assigned to train them. This US/France production captures the stark beauty of the desert landscape right from the start as the impact of the round-up, the sheer terror of the animals, is palpably gut-wrenching. The cinematic style of Ruben Impens carries to the prison and the day to day operations and the rigors of the training program for man and horse. Matthias Schoenaerts, who came to my attention with “Bullhead (2011),” embodies the seething inner rage Roman feels toward the world – something of his own making, we later find out. He and the titular character are the focus of the film – they are two sides of the same coin, angerwise. But, the rest of the cast of characters – mostly the other trainers and a curmudgeonly Bruce Dern – get their due as members of the human/equine teams. This is an inspirational film and its story deserves telling. First-time feature director, co-writer Laure de Clermont-Tonnere does a solid job in bringing the viewer to the center of both its main characters and the terrific program they represent.