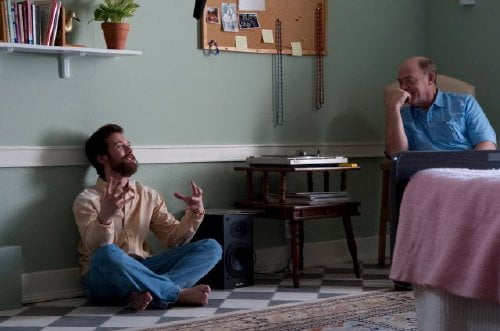 When sixty-five year old Henry Sawyer (J.K. Simmons, "Juno") is reintroduced to his estranged son Gabe (Lou Taylor Pucci, "Thumbsucker") after almost twenty years, the mid thirties ex-hippy is suffering from a brain tumor that prevents him from retaining short term memories. The conservative dad needs to find a way to break down the old, hard-wired barrier between them and finds it in 60's rock when he discovers through a music therapist that "The Music Never Stopped."

Indie producer Jim Kohlberg takes on directorial duties for the first time and it shows. This sentimental father and son tale adapted from an Oliver Sacks essay by Gwyn Lurie and Gary Marks plays it altogether too genteelly for the turbulent times it depicts. Who can believe a patriotic dad whose brother lost his life in WWII and a pot smoking, flag burning wannabe rocker would hardly raise a voice to each other, let alone not even hint at coming to blows? Everything's all too nicey-nicey, but the medical aspect may be of interest, especially to fans of 60's protest songs and the Grateful Dead. Henry and his wife Helen (Cara Seymour, "American Psycho," "An Education") are introduced as a lived in couple approaching their retirement years when everything is upended by a phone call. They're shocked by their son's appearance, learning he's been living on the streets, and by his vacant, non-communicative condition. We see the family's early years in flashback, when dad shared his love of music and pride in his brother's position as Count Basie's trumpet player with his young son, who could name title, artist and release year of such tunes as 'Til There Was You' and 'Young at Heart.' Helen takes on maternal duties with a vengeance, but Henry begins to back away, stating his presence isn't noticed anyway. But then the Polaroid engineer is gently laid off and Helen gets a job to help pay all the medical bills. It's when Henry takes on daily Gabe duty that the events of 1968, when the seventeen year-old Gabriel left home, are doled out. An incident at the hospital where Gabe plays the opening bars of "The Marseilles" on a trumpet sends Henry to the local library to research music's influence on the brain and he finds the research of local professor Dianne Daley (Julia Ormond, "Kit Kittredge: An American Girl," HBO's 'Temple Grandin'), who unlocks the key. After some initial reluctance, Henry begins to learn the songs of Dylan and The Grateful Dead. The film's best scene should feature the family, particularly Henry's reconnection with Gabe, but it doesn't. Supporting players provide punchier notes than any of the leads, such as the moment when Dianne realizes what those "Marseilles" bars really reference or when Gabe's old girlfriend Tamara (Tammy Blanchard, "Rabbit Hole") realizes just how severe Gabe's brain damage is. Kohlberg allows Simmons to remain entirely too likable, too respectful of angry youth, too low key and he blocks Cara Seymour's 'big speech' awkwardly, calling attention to the acting going on. Lou Taylor Pucci plays his brain tumor as spacy, his rebellious youth without enough fire, although he does sell an unlikely sense of humor about his illness. Simmons and Pucci are best when describing their joy of music. For a low budget independent, the filmmakers do a pretty admirable job aging the actors in twenty year increments. "The Music Never Stopped" isn't a bad film, it just needed more vinegar to cut the sweetness.