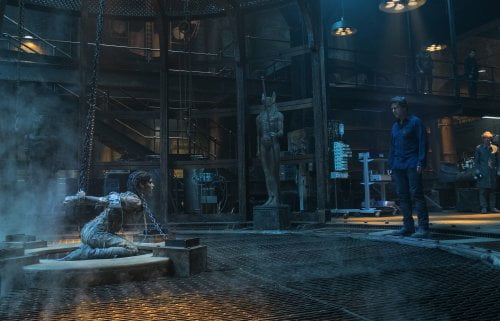 In ancient Egypt, Princess Ahmanet (Sofia Boutella, "Star Trek Beyond's" Jayla) was raised to be a Pharaoh, but when her father has a son the loss of the throne enrages her. Making a black pact with Set, the God of Death, Ahmanet wipes out the royal family. But she is imprisoned for her crimes, embalmed alive and buried in a pool of mercury far from her kingdom. 5,000 years later, American soldier Nick Morton (Tom Cruise) and his reluctant partner in crime Chris Vail (Jake Johnson, TV's 'New Girl'), hoping to plunder riches with a map stolen from archaeologist Jenny Halsey (Annabelle Wallis, "Annabelle"), call for an air strike that reveals the guarded tomb of "The Mummy."

The first of Universal's new Dark Universe shared collection of monster movies unveils their new direction as more of a Monster Mash than a classical retelling of the original horror films. Yes, there is a mummy, but we see little of the wrapped version and this mummy creates zombies that reanimate like werewolf transformations. Speaking of werewolves, Nick's relationship with Chris borrows copiously from "An American Werewolf in London," the undead Vail appearing only to Morton in this film's buddy comedy pairing. Dr. Jekyll's (Russell Crowe) here too, heading the secret organization created to stamp out evil, at least when he can control himself. The film resembles the studio's 2004 release "Van Helsing" more than its 1932 classic. As written by "Jack Ryan: Shadow Recruit's" David Koepp and "Jack Reacher's" Christopher McQuarrie & Dylan Kussman, there is little in the way of character development. Cruise is a daredevil rogue, having slept with Halsey to obtain her map, then literally going rogue in Iraq. He is, of course, redeemed fighting against the horror he's unleashed, but we have little reason to root for this man other than his third act objective. The only thing Cruise brings to this party is a couple of his patented, extraordinary stunts, which, admittedly, are high points of the film. There is no romantic spark between him and either Wallis or Boutella, the first relationship played for its damsel in distress angle, the latter for a lot of CGI 'horror.' Of more interest is Crowe's Jekyll, who, guessing from his role here, will be a franchise regular. One surmises he's created Prodigium in response to his own diabolical half, Hyde appearing at a crucial moment. As she proved in "Star Trek Beyond," Boutella has quite the screen presence, an alluring seductress both before and after her transformation. Director Alex Kurtzman ("People Like Us") and his production team have crafted an impressive crypt for Ahmanet as well as an ancient underground chamber found digging for a London Tube extension. The latter houses tombs of Crusaders, one of which holds the jewel taken from the Dagger of Set which Ahmanet needs whole in order to bring Set to earth. The plane crash which releases Ahmanet's sarcophagus in London finds Cruise and Wallis in zero gravity, a real stunt far superior to the CGI bird strike which causes it. What truly great horror film has relied on CGI for its effects? I can't think of one, and given "The Mummy," this looks to be a major element of Universal's remakes. The 1932 film may not have had a lot of scares, but it had loads of atmosphere. The remake has neither. Grade: