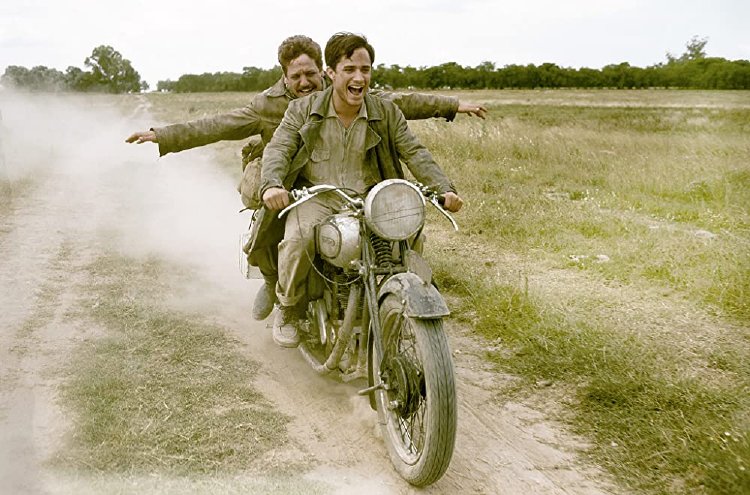 The name of Ernesto “Che” Guevara is synonymous with revolutionary fervor and as one of the key players who brilliance helped Fidel Castro take power in Cuba in 1959. His legend didn’t just happen and the seeds of his rebellious zeal were planted years before when young Ernesto and his best friend, Alberto Granado, took a motorcycle journey across South America. Along the way, the two young men realize their separate destinies in “The Motorcycle Diaries.”

The name of Ernesto “Che” Guevara is synonymous with revolutionary fervor and as one of the key players who helped Fidel Castro take power in Cuba in 1959. His legend didn’t just happen and the seeds of his rebellious zeal were planted years before when young Ernesto (Gael Garcia Bernal) and his best friend, Alberto Granado (Rodrigo de la Serna), took a motorcycle journey across South America in 1952. Along the way, the two young men realize their separate destinies and what the future will hold in store in The Motorcycle Diaries.”

Helmer Walter Salles (“Central Station”), with scripter Jose Rivera, takes the memoirs of Guevara and Granado as the basis for the story of a young man who later, quite literally, changed the world. 23 year old Ernesto and his friend Alberto are on the verge of beginning their lives as medicos. They plan to do their medical residency at a distant leper colony but, before they get serious about their lives, they want to experience one, last big adventure. They set off on their motorcycle, a 1939 Norton 500 dubbed “The Mighty One,” that has seen better days, traversing the vast lands of Argentina, Chile, Colombia and Peru and, in the process take an 8000 mile journey of the mind that will change each man forever.

Ernesto and Alberto are two adventurous idealists. Ernesto is a medical school student on the verge of completing his training and Alberto is a graduate biochemist. Together they decide that, before they buckle down to their life’s work, they will make the journey around the vast South American continent in search of adventure – and, if they are lucky, women. They set off on The Mighty One, woefully overloaded, and head into the heartland of Argentina with the plan, at the end of their trip, to do volunteer work in a leper colony on the Amazon River.

As the two young men run the rugged roads, they meet all manner of people, from the indigenous and poor Indians to the lackeys of the American conglomerate Anaconda Copper, the company that is raping the land of its resources and, in the process, enslaving the common man. As the pair move from Argentina through Chile, Colombia and into Peru, they see all manner of wondrous sites and experience the poverty of the people. But, along the way they must frequently call upon the kindness of strangers and, in the process, make many new friends – and an enemy or two.

Both young men are impacted by the plight of the continent’s endless supply of poor and Ernesto, in particular, is forever impacted by their plight. At one point, they meet a young Indian couple that is desperate for work and will take anything, even the pittance offered by a mining company, as a means to survive. As the travelers observe the poverty stricken population the seed for needed change are planted then firmly rooted in Ernesto’s mind. The experience changes young Ernesto from a naïve idealist into the revolutionary named El Che.

The Motorcycle Diaries” pays homage to the man who would become one of the most influential and renowned revolutionary leaders of the latter half of the 20th Century. But, when we meet the young, idealist future physician and his best friend, they only have their minds on their planned 8000 mile journey around the South American continent. The transport of choice (read: necessity) is Alberto’s aging, oil-leaking The Mighty One as they pack their belongings, including inhalers for Ernesto’s asthma, and hit the road – and almost get run over by a bus.

The journey that the two men make starts out as an adventure with new things to be seen, new people to meet and excitement at every turn, especially with the overburdened Mighty One. But this trek turns into more than Ernesto bargained for as he sees the day-to-day struggle of the people they meet. This is not the middle-class environment that spawned the two travelers and they are exposed to the poverty and the suffering of the people – often at the hands of faceless multinational corporations that were invited by the often dictatorial governments to rape the land and use and abuse the peasant population. As they near the end of their journey, Ernesto sees that change is necessary if the continent is to be united and governed by the people.

This revelatory tale is coupled with a good sense of pacing by Salles and company that makes the passing kilometers a marker for the changes Ernesto and Alberto undergo. The hardship they face, particularly when The Mighty One breaks down in the most inconvenient places, is supplanted by the frequent kindness of strangers from all walks of life. When the pair finally arrives at the leper colony, it is the culmination of their adventure. Ernesto, forever impacted by his experiences, eschews the safety of the medical compound and swims across the Amazon at night to be with his leper friends. The dangerous swim is a symbol of the effect of the changes within the young man.

Bernal, ostensibly the star of “Diaries,” is initially a blank canvas that is inexorably filled by his experiences on the road. As such, the actor’s performance is more that of an observer than a participant, foreshadowing what he will become in the not too distant future. Rodrigo de la Serna, as Alberto, is more in the moment and gives an often funny performance as Ernesto’s randy, fun-loving sidekick. Supporting casting has the feel that the players were taken right from the countryside that the boys traverse and give a realistic feel to the film

Techs are very well done with Eric Gautier’s photography capturing the trials and tribulations of the young men’s journey in such a way as to remind me of my old days driving a motorcycle. When the boys drive into the mountains and are confronted with deep snow and treacherous roads, I could really identify with their plight (having done so myself). The freedom and hardship of their chosen mode of transport is given true shrift. Period production design by Carlos Conti is mostly relegated to the various vintage vehicles used throughout the film.

The Motorcycle Diaries” struck a strong chord with me as I studied the revolutionary life of the man who became Che. But, it is also a nicely crafted road flick that will appeal to the liberal viewer with a penchant for history and social justice. When Ernesto gives his birthday speech near the end and tells of his vision of a United America (South America, that is), I felt like raising my fist in solidarity. Salles depiction of a young man on the verge of greatness may not appeal to all but it certainly appealed to me.