The Most Dangerous Man in America: Daniel Ellsberg and the Pentagon Papers 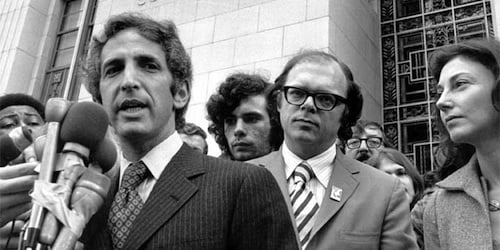 Docu-filmmakers Judith Ehrlich and Rick Goldsmith assemble the title character and those who worked closely with the man to present the world’s greatest whistleblower of all time and his life as conservative turned radical activist in “The Most Dangerous Man in America: Daniel Ellsberg and the Pentagon Papers.”

Pentagon worker and Vietnam War supporter Daniel Ellsberg began to rethink his views when he met Patty Fields, a radio host who got him to an anti-war rally for a working first date and finished his turnaround years later, when listening to draft resistor Randy Keller address an audience before commencing a prison sentence. When Daniel Ellsberg decided that the best way he could help his country was by going to jail, he became "The Most Dangerous Man in America." Cowriters (with Michael Chandler and Lawrence Lerew)/directors Judith Ehrlich and Rick Goldsmith take a standard documentary approach - talking heads whose voices segue into narration over stills and old footage, a scattering of animation, newspaper headlines, a central subject in both present day and past - and craft a story of patriotism, heroism and free speech with a subject most probably only think they know. The filmmaking team are top notch craftspeople who make history breath and resonate. I remember the brouhaha over the Pentagon Papers leak as a tweener with conservative parents, so little did I know the makeup of the man behind it. Not only did Ellsberg work in the Pentagon, but he provided the sensationalistic account of a soldier's torture that bolstered McNamara's stance. Ellsberg actually went into battle in Vietnam, where he proposed to the liberal Patty Fields and later quickly lost her when she questioned his ethics. His experience in the Mekong Delta also convinced him that the U.S. could never win this war and that we were sacrificing American and Vietnamese lives to save face. So began the birth of the Ellsberg most know. There are several fascinating accounts here, from Ellsberg's cautionary words to Henry Kissinger to the actual dynamics of leaking the papers, which, in effect, became a round robin of publishing by so many newspapers there was no stopping it (plus a Senator from Alaska who dared to read them into the Senate record). A Supreme Court decision on the case is cited as the most influential on free speech in the nation's history, and, for those conservatives out there, it is noted on several occasions that Ellsberg and any who assisted him always considered national security before acting. Still, Ellsberg had to suffer the heartbreak of seeing all his efforts amount to little when the U.S. public failed to understand the import of what those papers, beginning with the New York Times, published and reelected Nixon in a landslide. And yet, it was his actions that caused the Nixon White House to establish the group that would stage the Watergate break-in (not to mention Ellsberg's own psychiatrist's office), so, in essence, he began Nixon's end. Among those weighing in on Ellsberg and the times are the late, great Howard Zinn, Senator Mike Gravel, Ellsberg's eventual wife Patricia, and counsel to Richard Nixon John Dean and Bud Krogh. "The Most Dangerous Man in America: Daniel Ellsberg and the Pentagon Papers" is not only a fascinating historical account, but the story of how one man's morals overcame careerist ambition. It is well deserving of its Oscar nomination as one of 2009's best documentaries.