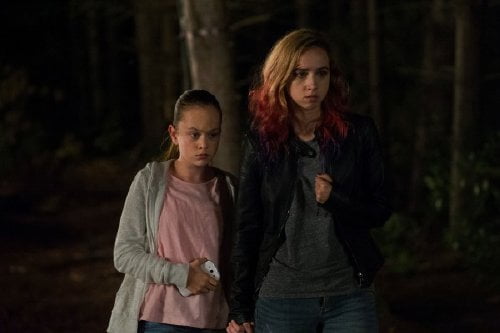 A preteen girl clears up empty beer bottles and full ashtrays, then washes the dishes. Her suitcase is packed and when she tells her mother to get up at 9 a.m., they're already an hour late. But hungover Kathy (Zoe Kazan, "Ruby Sparks") doesn't stir until late in the afternoon, so their trip to bring Lizzy (Ella Ballentine, "Captives") to her father finds them traveling on a dark country road past midnight. A blown tire strands them and as they await a tow truck and ambulance, the fractious pair unite to try and survive something they can barely comprehend, "The Monster."

Writer/director Bryan Bertino's first genre outing, "The Strangers," had a promising premise, but fell apart in the execution. With "The Monster," he's upped his game with a film that can be viewed as a literal monster movie or read as a psychological metaphor. Even with its obvious man-in-a-suit-monster it nonetheless terrifies because we care about the characters. The upcoming "A Monster Calls" may have a higher pedigree, but the rougher and rawer "The Monster" mines similar emotional ground. It is clear at the onset that young Lizzy has had a rough upbringing with a verbally abusive single mom who drinks to excess. Kathy at least respects Lizzy's request that she not smoke in the car and during a cigarette stop she awkwardly gifts her daughter with her mother's watch. When Lizzy asks her why, Kathy replies 'you won't be coming back,' an admission that she realizes her daughter would much rather be with her dad, Roy (Scott Speedman, "The Strangers"). Their journey is intercut with flashbacks that reveal their tumultuous bond, Lizzy cowering as Kathy rages, Kathy trying and failing to quit drinking as her young daughter tenderly cradles her, hateful words exchanged as a matter of course. This is a mother-daughter love-hate relationship. The accident brings about a foxhole mentality though, the two immediately concerned about the welfare of the other. After Lizzy wraps her mother's injured wrist, the two spy a wolf in the road, hit as their car spun, and venture out to check. But the wolf bears injuries beyond what their car inflicted, Kathy extracting a three inch tooth from its side. Finally a tow truck appears in the rain. Jesse (Aaron Douglas, TV's 'Battlestar Galactica') disappears beneath their vehicle, a broken axle needing adjustment for his hookup. Lizzy notices the wolf has disappeared. There are low, rumbling growls emanating from the woods. When fully viewed, the monster (Chris Webb) looks like something from a 1950's B movie, yet Bertino's film is still tense and scary. The seclusion of a lonely road lit mostly by headlights, rain obscuring a view which quickly recedes into pitch black, makes its characters vulnerable, their fear cutting through barriers of resentment. We're also kept on edge, tomandandy's ("The Mothman Prophecies," "The Strangers") ominous score alerting us to lurking danger. And while Bertino may use jump scares, his have consequences. Above all, it's the two starring actresses who bring "The Monster" home. Kazan slides from tersely abusive to reflectively maternal, the actress making us well aware of her burden of guilt. Ballentine is extraordinary, resentful, yet yearning for a connection. Even as she spits out hatred towards her mother, we know it is her mother's behavior and not the woman herself that is her target. It would be easy to tag the monster as a symbol of Kathy's addiction, but it goes deeper than that, a wrestling with the very meaning of Kathy and Lizzy's nighttime journey. With "The Monster," Bertino takes a simple genre concept and uses it as an exploration of the pain that often accompanies love. (A24 will release "The Monster" in theaters and On Demand on 11/11. The film is available now exclusively on DirecTV.) Grade:

Lizzie (Ella Ballentine) is the responsible one in her nuclear family, with her mom, Kathy (Zoe Kazan), cleaning up yet again after another of her mother’s parties. They are on the way to drop Lizzie off at her dad’s home when a tire blows out on an old, deserted road. Shaken by the crash, they are stranded until help arrives, but there is something lurking in the woods in “The Monster.” Writer/director Bryan Bertino brings us a slow build monster movie, but it is not just a jump-out-of-dark horror movie. It is, foremost, a mother/daughter story with Kathy and Lizzie in turmoil about their life together and the roles each plays – Lizzie is responsible, while Kathy is not even close to being so. Compound that with Lizzie’s fears about imagined monsters in the dark and the fact, on that dark, desolate, rain drenched road, that there really is a live monster lurking in the woods. As I said, “The Monster” has a slow build and it is not until after the 30-minute mark does the monster, thankfully kept dark to hide the zipper on the monster costume, show its fangs. It is an average monster movie but with above average performances by Zoe Kazan and Ella Ballentine, making it a plus in the pantheon of relatively low budget monster movies. It also just happens to be a coming of age tale with a strong go-girl! vibe.