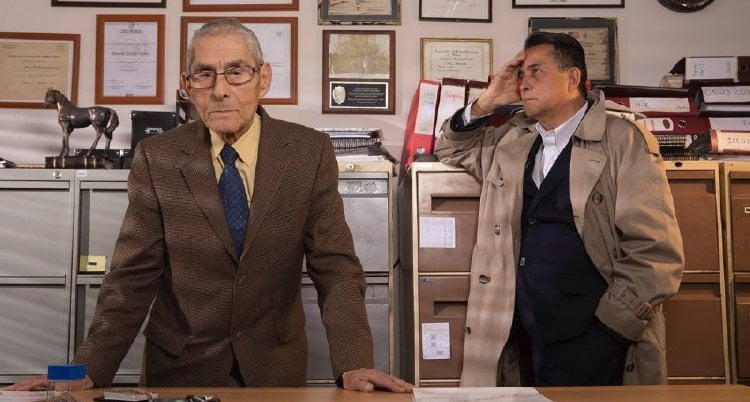 When a Santiago detective agency gets a client who wishes to have the nursing home her mother resides in investigated for theft and abuse, Romulo puts an ad in the paper for an 80-90 year old who is good with technology.  After a string of amusing interviews, Sergio arrives and although he fumbles a bit with his iPhone, he’s hired to enter the San Francisco Nursing Home as “The Mole Agent.”

Chilean writer/director Maite Alberdi wanted to make a documentary about a private investigator, so she began working as an assistant to one.  The fact that so many of his cases revolved around nursing homes was auspicious, tying into her prior 2016 work “Yo no soy de aquí,” which also helped convince the nursing home of her ruse to film there.  But her biggest boon is Sergio, the newly widowed man Romulo hires, whose kindness and attractive gentlemanly appearance makes him a big hit with the predominantly female residents of San Francisco.  (Ironically and amusingly, Sonia Perez, the woman he’s been sent in to check on, is the only one who wants nothing to do with him.)

The first part of the film establishes the case and the comical interview process where elderly male candidates’ claims of technological proficiency are wildly overblown.  Also amusing are the residents’ reactions to Alberdi’s establishment of her documentary, one woman on a bench of three trying to covertly draw the attention of the other two to the camera.  She’s as obvious as Sergio will be in his undercover role.

Armed with an iPhone, several apps and a spy pen and glasses armed with tiny cameras, Sergio will frustrate Romulo by directly asking nurses about Sonia’s medications and with the non-investigative musings of his written reports.   But as Sonia proves to be a bit cranky in his presence, he begins to make friends with the other women there, his gentle probing indeed uncovering a kleptomaniac, Marta, in their midst, albeit an addled, lovable one.  One woman, Bertita, will pursue him aggressively, hoping for marriage.  Most heartbreaking is Rubina, a beauty who doesn’t remember Sergio from one conversation to the next.  When he discovers that no one has visited her in an entire year, Sergio has pictures of her children made up, a gift she cherishes.

Without listening to Alberdi being interviewed, one could come away from “The Mole Agent” wondering if Sergio and his investigation were merely a ruse to set up what her documentary ultimately concludes – that loneliness is the real problem here.  We barely see any footage from Sergio’s high tech gear, most of what we see coming directly through her camera.  But the film serves two purposes.  The first is that it is charming entertainment.  The second is that no matter the fine care being provided at San Francisco, without people around to really engage with its residents, loneliness will always haunt its charges.  As Sergio asks Romulo, if Sonia’s mother is so concerned about her, why hasn’t she been there herself?  “The Mole Agent” is a strong reminder to not forget our elders.

A woman suspects that her mother’s nursing home is abusing the residents and stealing. She hires a private investigator to look into the allegations and he, in turn, puts an ad in the newspaper looking for “man between 80 and 90” to become “The Mole Agent.”

Writer/director Maite Alberdi begins this charming and insightful documentary with the abovementioned ad and the montage of interviewees who respond. This funny sequence leads to the selection of Sergio as the best candidate. The investigator explains the mission to him and provides the new secret agent with the tools of his trade – camera/cell phone, spy glasses and a camera hidden in a pen.

Sergio is planted in the nursing home as a new resident and agreed to stay, observe and spy for three months, collecting data on the machinations of the home, its staff and its residents. What he discovers in his investigation is a story of loneliness, aging and the importance of companionship – as well as a rather intriguing investigation and its document.

I will reserve my thoughts about “The Mole Agent” to myself. I was totally charmed by the skill of the documentarians and the introduction of Sergio, a man after my own heart – he is my new life role model. If you want to know why, you will have to see “The Mole Agent” for yourself to find out.