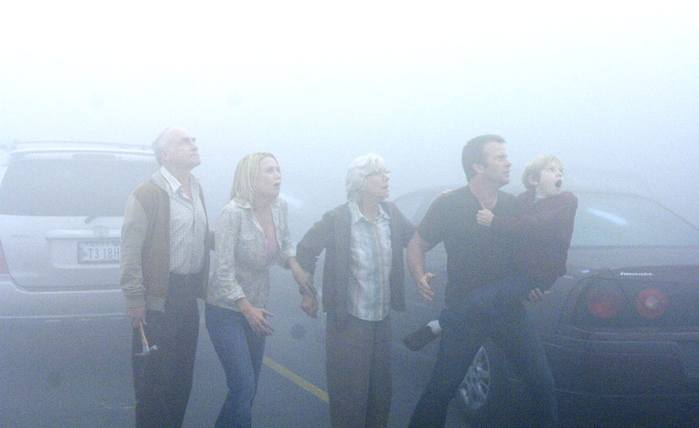 After a violent thunderstorm, David Drayton (Thomas Jane, "Dreamcatcher," "Stander," "The Punisher"), a Hollywood poster artist living in a rural lakeside town, surveys the damage to his family home and discovers his litigious NYC lawyer neighbor Brent Norton's (Andre Braugher, TV's "Homicide: Life on the Street") dead tree has crushed his boat house. But times of trouble bring people together, so David and his young son Billy (Nathan Gamble, "Babel") drive Norton, whose Mercedes was also a casualty, into town for supplies. The Food Mart is crowded when a local senior, blood running down his face, tells everyone they must stay inside because of the thing that grabbed his friend from within an encroaching enemy, "The Mist."

Writer/director Frank Darabont ("The Shawshank Redemption," "The Green Mile") has directed a really good and good adaptation of a Stephen King novel, not a bad track record at all, only to follow those films up with the miserable "The Majestic." "The Mist" marks a partial return to form except for Darabont's new 'twist' ending which King has overpraised. Like the novella the film is adapted from, "The Mist" is most interesting in its observation of societal upheaval in the face of fear. The crowd in the supermarket are immediately divided into Doubting Thomases and cautious belief. Small support groups form and we meet individuals, like third grade teacher Amanda Dumfries (Laurie Holden, "Fantastic Four," "Silent Hill"), new in town, and the plucky older educator, Irene (Frances Sternhagen, TV's "Cheers," "Sex and the City"), who introduces her to David and his son. There are the three military men, representational of all those seen on that ride into town, and the one local boy among them, Wayne Jessup (Sam Witwer). He's got an eye for store cashier Sally (Alexa Davalos, "Feast of Love"). The store's manager and assistant manager, Ollie (Toby Jones, "Infamous," "The Painted Veil"), are also on hand. Last but far from least is Mrs. Carmody (Marcia Gay Harden, "Pollock," "Mystic River"), the town's religious quack who may prove to be more dangerous than the things that lurk outside. When David goes out to the store's loading dock in search of blankets, he notices the mist is coming in through the store's generator. And it reeks. Notifying Ollie, he, bagger Norm (Chris Owen) and a couple of yokels, Jim (William Sadler, "Bill & Ted's Bogus Journey," "The Green Mile") and Dan, go to investigate. A divide happens within this small group when Norm insists he be allowed outside to unplug an air filter. When the door is opened, huge tentacles with gaping maws and black claws slither in and Norm is history. The shaken group try to tell the people inside what has happened, beginning with Brent, but Brent starts a schism thinking they're trying to fool an outsider (and a wealthy black one at that). Another group tries to venture out the front door to retrieve a weapon, one tied to a 300 ft. rope, but when only his lower half is reeled back in, the group understands the horrors but continues to splinter in the face of it, largely due to Carmody's belief that a vengeful God is showing his wrath. It doesn't help that her pronouncements seem to come true. When giant bugs and the larger creatures that try to feed off them break through the store's plate glass, more are lost and desperation sets in. Drayton decides to take action. "The Mist" is a monster movie with special effects creatures that blend well with the live action, but are not particularly original in conception. More icky than horrific, King and Darabont's horrors on parade are an amalgamation of things we've seen before, from "The Fog" to "Arachnid" to King's own "The Tommyknockers." It's the psychology of its characters that makes "The Mist" interesting, but not all the actors are equally so. The usually reliable Thomas Jane is a stiff and bland hero here, yet support often shines. Best is Gay Harden in the juicy villainous role (she's a spinoff of "Carrie's" mother) and Jones as her unlikely vanquisher. Sternhagen gives us yet another one of her feisty New Englander types, but she's so good at it she steals most scenes she's in. But for all the suspense getting Drayton and his handful out onto the road, the final reveal can be seen coming from its ironic setup. Nor does the new twist make much sense in the overall scheme of things, given the 'explanation' for the military screwup which caused the havoc in the first place. So, in the end, "The Mist" is a pretty worthwhile sit, but its scares and ending have all been seen before (as has its theme of the evils of religious fundamentalism).