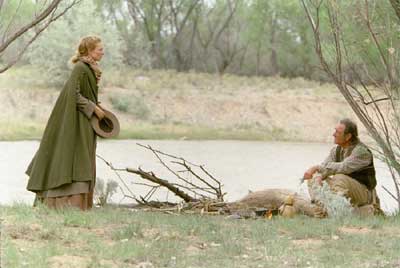 Maggie Gilkeson (Cate Blanchett) is a hard working single mother devoted to raising her two girls, teenage Lilly (Evan Rachel Wood) and youngster Dot (Jenna Boyd). But this is not a modern tale by any means. This little family lives in the wilderness of New Mexico in 1885 and, when renegades kidnap Lilly to be sold south of the border, they must turn to the last man the protective mother wants around - her long-estranged father, Jones (Tommy Lee Jones), in Ron Howard’s “The Missing.”

Maggie Gilkeson (Cate Blanchett, "Veronica Guerin") works the land with the help of her man Brake (Aaron Eckhart, "The Core") and acts as a healer to support her daughters, teenaged Lily (Evan Rachel Wood, "Thirteen") and younger Dot (Jenna Boyd, "The Hunted"). Bad memories are raised when the father, Jones (Tommy Lee Jones, "The Hunted"), whom she hasn't seen since childhood, appears, looking like an Apache. Maggie orders him off her ranch, but when Apaches kill Brake and kidnap Lily, Maggie swallows her pride and seeks out Jones to help her track "The Missing." The second good Western of the year comes, surprisingly, from director Ron Howard ("A Beautiful Mind"). Adapted by Ken Kaufman ("Space Cowboys") from Thomas Eidson's book "The Last Ride," "The Missing" is a thriller whose story resembles a modernized "The Searchers" with a dash of added mysticism. When Brake and the girls don't return from attending to their sheep, Maggie sets out after them and makes a horrific discovery. A hysterical Dot tells her that Lily has been taken by a man wearing a hood. The local sheriff (Clint Howard, "The Grinch That Stole Christmas") won't spare a man and the army charged with chasing the kidnappers down are headed in the wrong direction. Maggie, who'd refused Jones's money, offers the pursuit of her daughter instead as retribution. Maggie is determined not to forgive her father, but the duo's courageous rescue mission creates a bond of understanding. Cate Blanchett gives a fierce performance as the mother determined to regain her daughter. Her unbendable will and maternal worry are palpable, shaded with a touch of guilt. Blanchett flinches in something approaching shame when she is rebuked by the gramophone on the street outside the sheriff's office, as Maggie had denied Lily a visit to see it, instead insisting the girl accompany Brake and Dot. The Australian actress fits herself out with a frontier accent bred in a midwestern city, although an inexplicable Irish lilt occasionally creeps in. Tommy Lee Jones, actually well cast physically as Blanchett's dad (regard the nose), is quiet and contemplative, but not above some well placed humor, befitting an artist (Jones sketches when relaxing) who has wrapped himself in Indian ways. Jenna Boyd is terrific, giving a complex and natural performance as the little girl who insists on accompanying her elders. Watch her reflect Blanchett's backbone when she firmly states she will not be left behind. Wood, however, is saddled with a victim role, although she quite convincingly projects the petulant rebellion of an adolescent in early scenes. Eric Schweig ("Skins"), made up with teeth spaced like a predator's, is terrifying as Pesh-Chidin, the witch Apache with a black soul. He's nicely countered by Jay Tavare's ("Adaptation") Kayitah, an Apache friend of Jones's seeking the return of his son Honesco's (Simon Baker, "Smoke Signals") new bride. Tavare's stern exterior hides humor and warmth and he appears in the film's second half as a male companion for Jones and to counterpoint Chidin's evil. Max Perlich is sufficiently oily as the white slaver charged with overseeing Chidin's catch. The story, however, for all its subtleties is guilty of over staying its welcome with one too many foiled rescue attempt. An initial surprise is given away by Dot in what seems a screenwriter's need to fulfill an earlier foreshadowing moment, and the chase continues after Lily has been reclaimed. Still, Kaufman shows a deft hand at letting us fill in the blanks of Maggie's past and her gradual peace with Jones is well earned. Howard's production captures the grit and hard labor of living in 1885 New Mexico (the first scene features Maggie performing a nasty tooth extraction). Cinematographer Salvatore Totino ("Changing Lanes") creates dark, painterly interiors that explode into bright widescreen vistas, but his focus remains on the characters rather than the landscape. Costume designer Julie Weiss ("Frida") complements Blanchett's figure in earth-hued woolens that look made to last. James Horner's ("Titanic") score is effective and mostly understated, using tribal rhythms sparingly. "The Missing" is eerily relevant today, an age of Elizabeth Smart and Amber Alerts. Ron Howard has added a timeless Western to the genre.

Maggie works her land with the help of Brake Baldwin (Aaron Eckert), Emiliano (Sergio Calderon) and her daughters. It’s a hard life but it has a sense of peace as she also acts as the healer for all of those, near and far, who need her medical skills. One day a strange man arrives. He looks and dresses as an Apache but turns out to be the father who abandoned Maggie, and her mother, when she was a child. He had been bitten by a rattlesnake and survived and the experience made Jones decide to reconcile with his daughter. Headstrong Maggie wants nothing to do with Jones and, with Brake holding the man at gunpoint, demands that he leave. Soon after, Brake, Emiliano and the girls head out on a hunt and assure the homebound Maggie that they will be back before sundown. When they fail to return as promised, she sets off at first light in search of her family and friends. She comes upon a grisly scene where Emiliano lay dead and Brake murdered in a most heinous way. Luckily, little Dot is safe but tearfully tells Maggie that Lilly was taken by a mystically empowered psychopathic killer, Pesh-Chidin (Eric Schweig), who trades, with his renegade partners, in the selling of kidnapped young women. Suddenly, Maggie’s relationship with Jones radically changes and, despite her reluctance, she knows she needs his help if they are to save Lilly before the slavers cross the border to Mexico. An uneasy truce is reached as Maggie, Jones and Dot head off in pursuit of the kidnappers. Along the way the wall of mistrust that Maggie holds for her father slowly erodes away and a bond and understanding form as they join forces to save Lilly. But, there is a major problem with their plan – Pesh-Chidin. The fallen shaman has used his magical powers for evil, not for good, and his wicked magic can strike down his foes from afar. Only Jones has the power to fight back when the witch casts a spell on Maggie. An Apache father and son, Kayitah (Jay Tavare) and Honesco (Simon Baker), also in pursuit of the kidnappers who stole Honesco’s fiancée, join the tiny troupe as they close in on the slave drivers. A battle between good and evil is set . Ron Howard has run the gamut, over the years as a filmmaker, from his early days under Roger Corman’s mentorship to winning the Oscar for “A Beautiful Mind.” While “The Missing” is not his best work it does represent the dedication he has always displayed in the craftsmanship of his many feature efforts. This time around he appears to be trying to emulate the great John Ford with what I found to be a politically correct rendition of that director’s “The Searchers.” Instead of Ethan Edwards (John Wayne) hunting for his kidnapped niece Debbie (Natalie Wood)– he plans to kill her for being spoiled by a savage – we have the estranged father and daughter joining together to save the child before it is too late. Where the older film carries a dark and sinister edge, “The Missing” keeps things upbeat and PC. Howard, working with a screenplay by Ken Kaufman based on the novel “The Last Ride” by Thomas Eidson, maintains a careful balance with his depiction of both white man and Indian. In true new millennium form good and bad are shown in both races, showing that no one race color or creed can be solely evil. I think that the other big western of the year, “Open Range,” captures the heart and soul of the American Westerns of the 30’s 40’s and 50’s. “The Missing” is more a film that derives its spirit from another while pushing the buttons of today’s audience. The talented cast delivers solid performances as befits a Ron Howard film. Cate Blanchett has more dimension as Maggie than she was allowed in her other recent film, “Veronica Guerin.” Maggie is a complex and troubled character, living a life that she can barely control under normal circumstances, never mind when renegade Indians steal her daughter. This is a physically challenging role and the usually delicate-looking Blanchett bellies up to the bar in a believable way. Tommy Lee Jones doesn’t stretch as the white guy gone native but looks cool in buckskin pants and beads. He is the noble savage but with a refined, educated background that embraced the spiritual lifestyle of the Native American. Little Jenna Boyd gives a striking performance as feisty young Dot. She refuses to be left behind when mom and granddad make plans to trek after Lilly and she is fully up to dealing with the hardship of life on the rescue trail. The young actress overshadows Evan Rachel Wood as Lilly. Wood made a spectacular debut in “Thirteen” but is relegated to being, early in the film, a selfish and petulant teen. Her expected metamorphosis to wise adulthood (she realizes in the end that mother is always right) comes late in the film so she has little time to develop Lilly. Eric Schweig, heavily made up as the mystical bad guy, is frightening to look at and carries himself with an air of menace and magic. He is as bad a bad witch as you can imagine and is the antithesis of what one expects of a shaman. Jay Tavare plays Kayitah with great humor, gets to dis on Jones in Chiricahua and proves noble but definitely not a savage. Watch out for the unexpected, though not surprising, cameo by Val Kilmer as a cavalry officer. Clint Howard makes his usual appearance in brother Ron’s movie. The rest of the supporting players fill out the background well. Techs are high quality. Salvatore Totino succeeds in capturing the rough landscape and the utter scope of the desperate quest of the little family. Costume is earnestly designed Julie Weiss. James Horner’s score fits the bill. Ron Howard keeps up the good work.