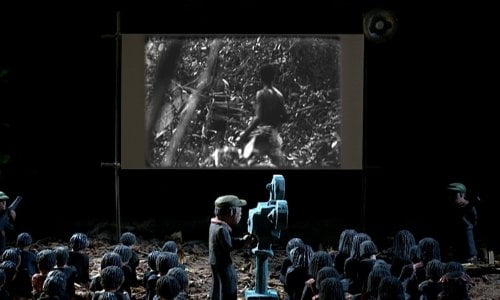 Between 1975 and 1979, Pol Pot and the Khmer Rouge caused the death of three million Cambodians in the establishment of the Democratic Republic of Kampuchea. With the exception of government propaganda photos and films, all private images of that terrible period were destroyed. One of the survivors of the atrocities, Rithy Panh, tells the story, in a creative way, of those who died with “The Missing Picture.”

Filmmaker Panh started out to chronicle the four years of horror faced by the Cambodian people via photographs and film. But, the lack of personal photos and film – destroyed by the Khmer Rouge - forced the filmmaker to come up with a creative way to tell his story: he makes small clay figures and uses them to show what life was like under Khmer Rouge rule. Conceptually, “The Missing Picture” is much like the fascinating documentary “Marwencol (2010)” where a man, Mark Hogancamp, who suffered brain damage after a savage attack, built a miniature World War II-era Belgian town, complete with Barbie and Ken dolls, as therapy. In a way, Panh is doing much the same thing as he creates the tiny, carefully crafted clay figures of those he lost during the Cambodian Communists’ Great Leap Forward. Rithy Panh’s tome is a slice of little known history – “The Killing Fields (1984)” and the documentary “S-21: The Khmer Rouge Death Machine (2003) are about the only chronicles we have of the mayhem that took place over four years during the 1970s. The director delves more fully into what happened during that time of terror: the Communist deportation of two million people from Phnom Penn, emptying the city, to the countryside for “re-education” to the Khmer Rouge’s tyrannical doctrine. Panh tells his story with the events recreated, with his many clay figures and settings, from his memories of the atrocities as a boy. “The Missing Picture” is a truly original documentary that brings to light a time of death and destruction that was previously (except for the aforementioned films) cloaked in mystery.