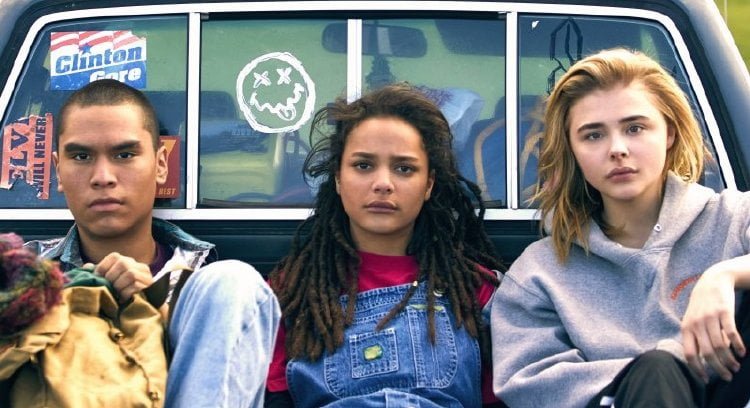 In the early 1990's, when a teenaged girl is caught in the back seat of a car on prom night, it's who she's with that horrifies her evangelical aunt and uncle, another female. She's sent to God's Promise, a Christian gay conversion center, for "The Miseducation of Cameron Post."

Cowriter (with Cecilia Frugiuele)/director Desiree Akhavan's ("Appropriate Behavior") adaptation of Emily M. Danforth's YA novel couldn't be more timely given the rise of religious right extremism, the first of two gay conversion movies hitting screens this year (the other, "Boy Erased," hits theaters this November). But while her film features some strongly drawn characters, the film itself lacks bite and simply trails off at conclusion. Still, this is a thoughtful, if relatively gentle, examination of the dire effects of this wrong-headed practice. We're introduced to Cameron (Chloë Grace Moretz) and her best friend and lover Corey (Quinn Shephard) at a Bible class, a pastor warning that his generation is trying to undo what they did during their teenaged years, years when evil approaches (just as he says 'then it's gotcha,' we're witnessing the two girls returning to Corey's empty house for a hot and heavy makeout behind her bedroom door). After they're discovered in a compromising position by Cameron's date Jamie (Dalton Harrod) at their prom, Cameron finds herself being deposited in the care of Dr. Lydia Marsh (Jennifer Ehle, "A Quiet Passion") and her brother, Reverend Rick (John Gallagher Jr., "Short Term 12") to be 'cured' of her same sex attraction by her obviously well-meaning guardian, Aunt Ruth (Kerry Butler). And everyone here is well-meaning, truly believing they are helping kids by diverting them towards heterosexuality by condemning natural tendencies ('Don't you want to have a family?' asks Dr. Marsh, as if heterosexuality is the only way to make that happen). It's the open faced Rick who welcomes Cameron, a smile plastered across his face as he rifles through her luggage looking for contraband, Ruth snatching away her beloved Breeders’ 'Last Splash' cassette with a frown. 'Erin's a big Vikings fan!' Rick notes enthusiastically of the cheerful, obviously butch roommate Erin (Emily Skeggs), who we'll later learn believes she's 'turned gay' by bonding over sports with dad too aggressively. Ruth, disconcertingly young for someone of such rigid values, leaves with a smile, convinced she's done the right thing as Rick plays Christian rock for a (mostly) admiring audience. But sitting in the back are amputee stoner Jane ("American Honey's" Sasha Lane) and Lakota Two-Spirit Adam (Forrest Goodluck, "The Revenant"), two rebels doing their time who take Cameron into their fold. Ironically, Cameron will find her 'tribe' here, but not without some distressing incidents along the way. Akhavan and Moretz illustrate how even an intelligent teen convinced of her own identity can waver under the onslaught of 'therapy' that includes classroom time, group, one-on-ones and 'the iceberg,' a visual chart on which patients are encouraged to list 'reasons' for their homosexuality (sports is a popular one, even advised to Cameron by Jane and Adam as a sop to the center). But while Jane and Adam, who grow pot in the nearby woods, are Cameron's support, they are two of the least developed characters, their reticence at true participation obscuring their whens, whys and hows. Erin, who amusingly notes to Cameron that her friend Helen (Melanie Ehrlich) is so obviously butch, looks to be heading towards serious problems, her night time come-ons shut down during the day. Dane (Christopher Dylan White) pushes back, and when he receives a letter from his politician father refusing to allow him home because he is still too feminine, Mark (Owen Campbell, "Super Dark Times") has a public meltdown that has Marsh ordering all to their rooms for private meetings. Cameron comes right out and asks Rick if they even know what they're doing and he has no good answers. As Rick, Gallagher does particularly fine work here, his sister's model for success's outward happiness clearly layered upon shaky ground. One of the perpetrators is one of the most sympathetic characters here. Moretz goes full emotional blast in a couple of earthy, passionate sex scenes but is otherwise restrained, more observer than participant, at least until that confrontation with Rick. Ehle's gentle approach is insidious, the actress convincing of her character's mission as her words slyly manipulate. Butler is the very picture of support of a most dubious kind. The Montana setting offers wide open vistas at odds with its community's closed minds, a strong allegory for God's Promise. The film's construction can be initially confusing as it mixes in dream sequences with its jumping timeline. "The Miseducation of Cameron Post" is good, but leaves one wishing for a stronger stance, its weak ending self-liberation at the expense of an ambiguous, possibly more dangerous future. Grade: