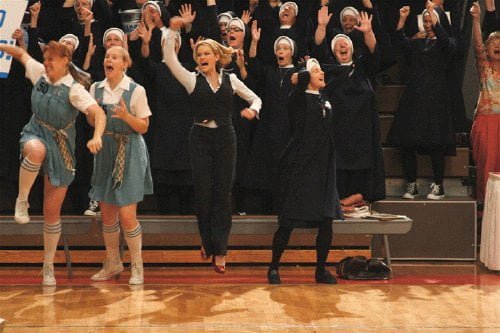 In November of 1971, newly wedded Cathy Rush (Carla Gugino, "Watchmen," "Sucker Punch") drove to Immaculata, PA to interview with Mother St. John (Ellen Burstyn, "The Exorcist," "Requiem for a Dream") for the position of the all women's college's basketball coach. Being the only applicant, she got the job and was promptly informed that their gym had burned down three years prior and that the team's existence was all about controlling raging hormones. But Cathy was determined and after finding an assistant in Sister Sunday (Marley Shelton, "Grindhouse," "Scream 4"), a young nun questioning her calling, she eventually got the town to rally behind "The Mighty Macs."

Fledgling writer/director Tim Chambers indulges in all the usual cliches of the team sports movie - three players highlighted while the rest fade into the background, the early losses counteracted by montages of winning cut with newspaper headlines and astonished Doubting Thomases - as well as that old chestnut, the 'cute' nun, one who is supposedly the height of cheeky adorableness for wearing black Chucky Taylors or riding a stationary bike. But he gets a lot right too. Speaking as a former student of an all girls Catholic high school with an all girls basketball team from about the same time period, the movie usually feels true. Costume is meticulous, with Gugino outfitted in color-blocked lurex cowl necks and brilliantly embroidered black suede belts while the girls look awkward in the 'Sunday best' they pick for a photo shoot. The financial strain of keeping the institution open was prevalent among private Catholic schools back then, as were the homey efforts to raise money to save them. The dusty jumble of a multi-purpose court, the dorky pleated jumper uniforms, and, most of all, the faces of the students, most of Irish or Italian extraction with the odd African American or Asian, are all entirely relatable. The film itself is grainy, looking like a vintage 70's production. Gugino's a force of nature here, an early feminist married to an NBA ref (David Boreanaz, TV's 'Buffy the Vampire Slayer,' 'Bones') whose support begins to waver when his wife's schedule doesn't accommodate his own. Boreanaz is a wash here, and the couple's relationship is portrayed as deeply as a saucer, but Gugino gives Rush drive and toughness while still making it understandable why should would be beloved by her team. A bigger surprise is Shelton - the pretty blonde actress whose career never really took off is quite convincing as a member of the sisters of the Sacred Heart, playing her character with a heads down modernism. Burstyn is merely required to worry and be businesslike, trying to pass her mother superior off as an equal on the college's all male board while Phyllis Somerville (Shotime's 'The Big C') and Jodie Lynne McClintock provide the comic relief. The Mighty Macs themselves have been wonderfully cast, all believable college girls rather than aspiring models - when Cathy visits one of her players, distraught over a romantic breakup, the girl has a bruise clearly visible on her very healthy looking thigh and when they come off the court, they're red faced and moist. Still only two come into sharp focus - Trish Sharkey (Katie Hayek) is the player from such a struggling family she wears her brother's boots and Lizanne Caufield (Kim Blair, "The Look") is the freckle-faced beauty totally focused on getting married. A third is mentioned, but never registers, although those faces do. That may be because the film feels like it was edited for its 95 minute run time. The college is on the verge of being sold and suddenly the Macs have managed to travel to Baltimore for regionals. Then it's a big financial crisis when they have to make their way to Chicago. Sister Sunday's crisis of calling is settled with a simple 'You're still here' from Mother Superior. The Rush marriage is vaguely defined, as is Cathy's motivation to coach. There's also absolutely no explanation as to how the college regained financial stability, although the real life historical update during the closing credits is a nice tribute. The film is sprinkled with nice little details, like the Heavenly Grace hand lotion stacked in forgotten crates that becomes a source of income and the 'We Will Be #1' buttons Cathy hands out to everyone. Even this film's 'unorthodox training method' cliche is admittedly more interesting than usual (a storm drain). Sure, "The Mighty Macs" is all a bit too nice (an attempted pickup of Cathy and out-of-habit Sunday in a bar is so polite it's comical and where's the typical sneaking a puff behind the Virgin statue of the time?), but the competition on the court is genuinely fierce and the all around sense of sisterhood is solid.