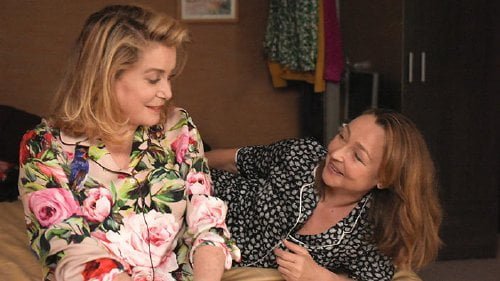 Claire (Catherine Frot) loves her job delivering babies at a local maternity hospital but, otherwise, keeps to herself. She gets an unexpected phone call from her father’s long ago mistress, Beatrice (Catherine Deneuve), and that staid life will change “The Midwife.”

Claire (Catherine Frot, "Marguerite") has had a productive day bringing yet another child into the world. She returns home to relax and gets a phone call from Béatrice (Catherine Deneuve) saying she wants to talk about Claire's father. We do not yet know who Béatrice is, but we see Claire's reaction, collapsing into a fetal position in her shower. But although Claire's meeting with Béatrice doesn't go well, the older woman's reintroduction into her life opens new doors for "The Midwife." Writer/director Martin Provost's ("Séraphine") life was saved by a midwife, who not only gave his newborn self her own blood, but registered his birth at the town hall. "The Midwife" isn't based on his own story, but it is an homage, written for Frot, who actually delivers a real baby in the film's opening scene. The film follows the well worn theme of opposing forces giving each other a new perspective on life, but it eschews easy sentiment and Frot, Deneuve and Gourmet are a joy to watch. Claire lives right, tending to her gardening allotment, taking care of others. We can see her kindness when a frightened, bleeding young black woman who won't let hospital staff approach responds to Claire. The small maternity ward where she works is closing in favor of a 'baby factory' and although she's been offered a job there, she refuses on principle. One gets the sense she spends a lot of time alone. She's cooly cautious when fellow gardener, Paul (Olivier Gourmet, "The Son," "Two Days, One Night"), introduces himself. She meets Béatrice in a bistro, the flashy older woman ordering rare steak, frites and red wine before Claire's disapproving stare. When Claire tells her that her father shot himself shortly after she left, back when Claire was an adolescent, we realize this woman was his mistress. Béatrice, who never reads newspapers, is genuinely shocked, but her dramatic entreaties fall on deaf ears. Béatrice is the type who lives from day to day, taking what she can, always in debt, a party girl with a penchant for gambling with the guys. But when Béatrice receives a dismal diagnosis from her doctor ('Don't shave my head!') she has only Claire to turn to and when the midwife arrives she introduces her to her doctor as her daughter. Claire does not correct her and knowing Béatrice has nowhere else to stay, opens up her home. Spending time together not only begins a healing process for their relationship, but Claire learns to have fun while Béatrice realizes what her self interest has cost others. Provost uses his two protagonists to reflect differing views of Parisian neighborhoods, the great outdoors enjoyed when Claire's son Simon (Quentin Dolmaire, "My Golden Days") and his pregnant girlfriend Lucie (Pauline Parigot, TV's 'The Returned') come to visit, a sense of family growing once Claire and Béatrice begin to make peace. Claire opens up to Paul, a kindly truck driver with champagne tastes, their gentle romance a lovely subplot. But the obvious delight of "The Midwife" is watching the two great French acting Catherines, on screen together for the first time, feint and jab. Frot, the considerate introvert, gradually relaxes. She's got the less flashy role, but she grounds the film, her quiet drawing us in, her newfound midwifery skills astonishing. Deneuve plays to the rafters and she's a hoot, an extrovert in both dress and manner. They're simply wonderful together and "The Midwife" is delightful from start to finish. Grade:

It is hard to say who the central character is in “The Midwife.” Catherine Frot, as the dedicated Claire, is la premiere dame in this original story by director Martin Provost. But, Catherine Deneuve is la grande dame of French cinema and is a strong presence in this quiet tale of a lonely woman who has never really known love. Claire delivers babies every day at the soon-to-close maternity hospital. She is great at her job and has the respect of all her colleagues but her career prospect is to take a job as a “birth technician” at the new healthcare conglomerate. Then, she gets the call from Beatrice who asks to meet her for lunch. This meeting begins a relationship rekindled after so many years of estrangement. And, Beatrice has her reason for the sudden rekindling which I will leave for you to find out. The obvious draw to “The Midwife” is to see the two Catherines. Frot gives a sensitive performance as a woman who has settled for the life she has. Her son, Simon (Quentin Dolmaire) is away at school and he has a girlfriend Lucie (Pauline Parigot), who is also pregnant. She consoles herself by working her plot in a public garden and attracts the attention of Paul (Oliver Gourmet), the son of the owner of the adjacent plot. She rebuffs him, at first, but the kind, gregarious truck driver soon breaks down her wall of self-imposed solitude. The sidebar about Catherine and Beatrice is a story unto itself and it is a pleasure to see two great actors secure in their own skin. Watching them together is watch two very distinct, strong-willed, full-bodied characters. Frot is the anchor for “The Midwife” but Deneuve, even more, is able to shed her glamorous career persona and becomes the very complex, lover-of-life Beatrice.