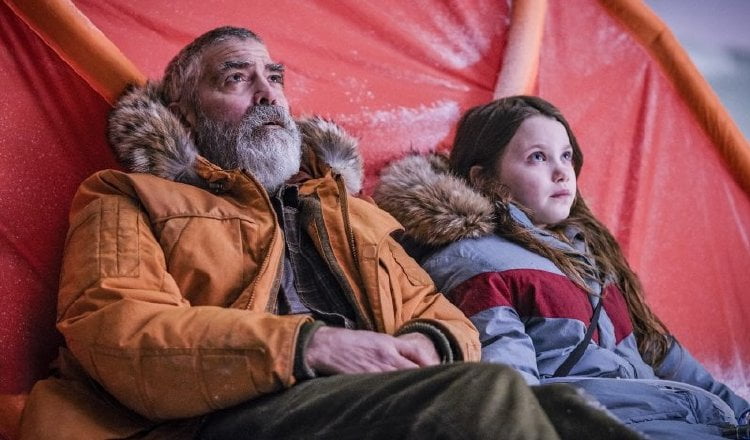 As a team of astronauts led by Sully (Felicity Jones) prepares to return to earth, lone scientist Dr. Augustine Lofthouse (George Clooney) struggles through harsh terrain to a remote Arctic station to warn them not to return to a planet they will no longer recognize in "The Midnight Sky."

George Clooney returns to the director’s chair with a film sweeping in its statement about Humankind’s relationship with Earth and its own future yet intimate in its well-earned emotional foundation.  And yet as moving as it can be, largely due to Clooney’s melancholy stoic resolve, Mark L. Smith’s (“The Revenant”) adaptation of Lily Brooks-Dalton’s novel ‘Good Morning, Midnight’ always feels like something we have experienced before.

The film opens at the Arctic’s Barbeau Observatory in February of 2049.  A large scale evacuation is taking place, the earth almost entirely uninhabitable because of some unnamed manmade catastrophe, yet Lofthouse, for reasons yet to be revealed, chooses to stay.  He’s puzzled when he finds a half-eaten bowl of cereal, then responds to a kitchen fire which calls his attention to a 7 year-old girl, Iris (newcomer Caoilinn Springall), crouched beneath the counter.  Is this the child whose mother couldn’t find during the evacuation?

Augustine cannot get the child, who regards him solemnly with enormous blue eyes, to speak, yet gains her trust through patience and playfulness.  He’s also unsuccessful trying to contact the Aether space station which he knows is due to return to Earth after a mission to find a habitable planet and which has been far enough out of range to not know what is going on.  Things take a serious turn for the worse as he watches the lethal catastrophe gaining ground on the Observatory, and so Augustine, who is also suffering from a medical condition requiring him to filter his blood periodically, makes the decision to travel to a weather station over a mountain in extreme conditions with his young charge.  Their journey (filmed on a remote glacier in Iceland in whiteout conditions) is hair raising, so arduous they lose their transport, medical bag and almost Iris along the way, but once in the station, Augustine makes contact with Sully.

Meanwhile we meet the crew of the Aether under the command of Tom Adewole (David Oyelowo).  Sully has been unsuccessful trying to raise anyone at NASA or anywhere else and although she has logical explanations, we can see she is deeply concerned.  When she finally connects with Augustine, whom she greatly admires, the station enters uncharted territory where conditions cause them to lose radar and communications.

And so we trade Augustine’s series of misadventures with the Aether’s and Clooney has directed some heart-stopping scenes, however reminiscent of “Gravity” (among others) they may be.  It is the characters which involve us, not only Sully, expecting Tom’s child, but family man Mitchell Rembshire (Kyle Chandler), the philosophical Sanchez (a moving Demián Bichir) and greenhorn Maya Peters (Tiffany Boone).  There is a human connection between Earth and Space, easy enough to figure out via flashbacks to the younger Augustine (Ethan Peck), but one which Clooney brings home with great sensitivity.

Special effects are serviceable, the Aether’s crew’s ability to project family members into their living spaces nicely done, but production design is uneven, the space station’s interior resembling the human cardiovascular system while its exterior looks designed to incur maximum damage in debris fields.  Arctic locations are much more believable if simpler.  Alexander Desplat’s score complements the action and emotion, but a crew sing-along to ‘Sweet Caroline’ makes a bigger impression.  One wishes “The Midnight Sky’s” script had found a better solution to an act one introduction that doesn’t work very well in retrospect, but Clooney’s gotten to the heart of the matter.