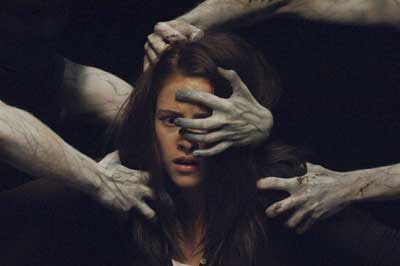 The Solomon family has left their Chicago home of 20 years to start a new life growing sunflowers on a secluded farm in rural North Dakota. Shortly after they arrive and set up house, 3-year old Ben (Evan and Theodore Turner) sees strange apparitions that the adult members of his family can’t. Soon, these spirits make their presence known, in a violent way, to his teenage sister, Jess (Kristen Stewart), portending worse things to come in “The Messengers.”

It is a great irony that in "The Messenger's" publicity soundbites, the Pang brothers talk about the importance of silence in horror because in their English language debut they use all kinds of loud noises to substitute for real scares. And just what is that Asian girl ghost doing in a Nebraska barn?

The tagline for “The Messengers” reads: “There is evidence to suggest that children are highly susceptible to paranormal phenomenon. They can see what adults cannot; they believe what adults deny. And they are trying to warn us.” This is pretty intriguing stuff and easily peaks your interest. Unfortunately, there is little of this captivating concept actually contained in the English language debut by Hong Kong-born twin brothers Oxide and Danny Pang. Instead, what we get in “The Messenger” is a schlock scare ‘em flick that isn’t all that scary and covers no new ground. Things start off in an obvious flash back as a mother frantically tries to get her and her son out of the house before “something” wreaks its murderous horror upon them. This prologue does have its creepy factor as one of the “something’s” victims is dragged into a dark basement with her fingernails digging furrows in the floor. Jump forward to the present with the Solomons heading, lock, stock and barrel, to their new home. Only an idiot wouldn’t get it that they are moving (play sinister music here) into the house from the film’s beginning. The family has past problems that aren’t immediately laid out as the script doles out these previous familial problems only in trickles with the intent of keeping the viewer guessing about some horrible secret. Instead, the Pang brothers take so long to tell about the sordid past – which isn’t all that sordid – I gave up any inkling of caring. This is the kind of faux horror film that benefits greatly from a well put together trailer that actually sparked some interest within me. It’s too bad that, as is often the case, the trailer is far more compelling than the actual finished product. Sure, it has its creepy skittering creatures and ghastly corpse-like figures that keep grabbing at Jessica (and no one else, for some reason). You can guess, if you’re not the aforementioned idiot, that these grasping undead are actually seeking the help of the living to find peace. Long, really long, “suspense” moments are dragged out to such a degree that I wanted to yell at the screen. “For God’s sake, turn around an look at what the kid is pointing at!” This slack suspense occurs several times. Kristen Stewart is the ostensible star of “The Messengers” with veteran actors Dylan McDermott (as dad, Roy), Penelope Ann Miller (as mom, Denise) and John Corbett (as drifter, John Burwell) providing support. These actors are on the where-the-heck-have-they-been list and, with their stick figure interpretation of their characters, you can see why. As such, the burden of “The Messengers” falls upon the slight shoulders of Stewart. The young thesp does her best but the script by Mark Wheaton (from a story by Todd Farmer) leaves her hanging in the wind. Little brother Ben, who doesn’t talk for reasons we are not told until late in the movie, is relegated to pointing at things we can’t see. All in all it’s a pretty unhorrifying horror effort from the Pangs. As I left the theater after seeing “The Messenger” I overheard a guy asking his date: “So, what was the message?” My thoughts exactly.