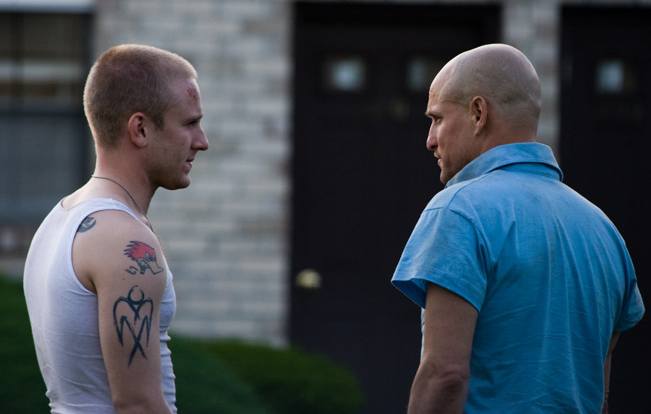 When Sgt. Will Montgomery (Ben Foster, "3:10 to Yuma," "30 Days of Night") returns from Iraq, he's met by his long-time sweetheart, Kelly (Jena Malone, "Into the Wild," "The Ruins"), who gives him a girlfriend night before returning to the man she became engaged to while he was gone. Will gets his second shock when he reports to his base and discovers he will be working as part of a Casualty Notification Team under Cpt. Anthony Stone (Woody Harrelson, "Zombieland") delivering news of fellow soldiers' deaths, the news no one wants to hear from "The Messenger."

Cowriter (with Alessandro Camon) Oren Moverman ("I'm Not There," "Married Life") makes his directorial debut with an intricate dual character study. Moverman maintains a beautiful sense of place and time while also crafting numerous set pieces with supporting players in unique ways that highlight each's different emotional pitch. The fledgling director is also blessed with another of Woody Harrelson's perfectly pitched characters. In his first starring role, however, Ben Foster, previously typecast as sniveling villains, cannot entirely shed the characteristics that fed those performances enough to break through here, although gradually, the actor does build sympathy and connects well with both Harrelson and tentative love interest Morton. Foster isn't helped by a makeup team that devises a serious Iraq eye injury so stylishly that at first it could be misinterpreted as a gang tattoo. The first thing we see are is his eye drop 'tears' rolling down his face. He moves into a spartan apartment and maintains a workout regime and reports for duty with the 'by the book' Stone, who informs him of the rules of notifying NoK's (next of kin) - avoid physical contact, route your own way (no GPS), no ding dongy bell (knock), don't park too close and do not form relationships. 'There's no such thing as a satisfied customer,' Stone informs Montgomery in the first of many terrifically written lines Harrelson makes Stone's own, even as he holds his duty with the highest regard. Each of their assignments illustrates a different type of situation. In their first, where Stone does all the talking, the pregnant girlfriend of the deceased keeps them waiting for his mother, who they must officially inform, and as the minutes tick by her cognition kicks in. After witnessing a harrowing dual outburst ('we are so sorry for your loss'), the two sit in a car as an ice cream truck rolls down the street tinkling out "Home on the Range," a song which returns later in the film. Stone takes Montgomery to blow off steam at a local watering hole and we learn that Stone is an alcoholic who no longer drinks as well as a serious ladies' man (of the female bartender, 'I'd like to strap her on and wear her like a government issued gas mask.'). Stone presses and hears about Kelly, a relationship which Stone coldly assesses to his taciturn underling, assessing his former girlfriend as a good loss. The two continue on their missions, meeting barely controlled violence (Steve Buscemi's Mr. Martin), eerie calm and empathy (Samantha Morton's ("Control," "Synecdoche, New York") Olivia Pitterson), and in the film's most surprising scene, a familial rift healed by grief. Will begins to chafe against Tony's rules, especially when he is intrigued by single mother Olivia, whom Tony suspects of cheating on her deceased spouse. He begins to follow her, and a cautious relationship begins. Still, Will and Tony do not completely bond until Will's rebellion is in Tony's face (he handles a grieving older couple with a hug) and Tony falls off the wagon during a weekend getaway with Claire (Lindsay Michelle Nader) and Lara (Merritt Wever, SHOtime's "Nurse Jackie"). From "The Human Comedy" through "Saving Private Ryan" and "We Were Soldiers," the burden of informing next of kin about the unthinkable has been portrayed on film, but "The Messenger" is the first to make these angels of death notification its subject. Moverman and Camon have done an exemplary job digging into the psychology of making the act as respectful and compassionate (and safe!) as possible while observing the military handbook. Pairing a soldier chafing against two tours of duty with no battle action against one who saw too much of it is an intelligent way to introduce a friction that must be overcome between the two men as well as bringing each man a different perspective to his current duty. Also admirable is the many portraits of the home side casualties of war we see from these two men's points of view, all set in a small town, anywhere U.S.A. locale that still boasts its own character (one does wonder, though, about the validity of approaching parents at a local farm stand to deliver the news). Bobby Bukowski's camera gives many scenes that subtly stunning look of sunlight filtering through suburban trees. Harrelson's been so good in so many roles lately, it is surprising his name doesn't get bandied about more as one of our best character actors. He's even made his mark in some neglible to bad films ("Sleepwalking," "Management," "Seven Pounds"). His Tony Stone is a complex yet appealing character and Harrelson is a master at getting a laugh without resorting to ham. Foster is doing the right thing in trying to step away from cackling sociopaths, but he needs to work on that nasal quality in his voice to erase them from our cinematic memory. Still, eventually his performance sneaks up, especially in his gentle approach to Morton's character. Morton, who looks like she's carrying baby weight in this film, does a great job putting up a mysterious facade that Foster can tear down. Her slightly looney acceptance of Stone and Montgomery's news contrasts sharply with the behavior she exhibits when will tails her, dressing down Army recruiters as she cradles the suit bag containing the clothes her husband is to be buried in. Morton brings the two sides together in a delicate performance as we learn her back story through Will. "The Messenger" is a small character study about two men with an unusual, burdensome task. It's the not-"Coming Home" of the Iraq War.