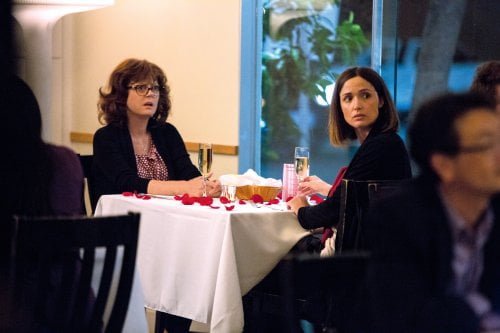 Marnie (Susan Sarandon) is a lively and energetic widow living in New York City. She wants to be closer to her daughter, Lori (Rose Byrne), so she pulls up her roots and moves to LA. But, Lori is having her own problems and does not appreciate her life being pried into by her mother, “The Meddler.”

After losing her husband Joe, Marnie Minervini (Susan Sarandon) decides to leave her home in New Jersey and resettle in L.A.'s The Grove to be closer to her only child, television writer Lori (Rose Byrne). Lori's life is also in upheaval, having recently been dumped by actor Jacob (Jason Ritter, TV's 'Parenthood,' HBO's 'Girls'), and when she sets boundaries for her constantly hovering mother, Marnie finds new ways to be "The Meddler." It's not often these days that we get to see Susan Sarandon headlining a film and writer/director Lorene Scafaria's ("Seeking a Friend for the End of the World") autobiographical love note to her mom proves a great vehicle for the Oscar winning actress. Annoying in her smothering and inability to read signals yet endearing and optimistic, Sarandon summons a mother most will recognize with equal measures of affection and exasperation. Outwardly, Marnie embraces life. Describing her new neighborhood as like 'Main St. at Disneyland,' she's got a lipstick-on-her-teeth-smile - and advice - for everyone, including the Apple Store 'genius' Freddy (Jerrod Carmichael, "Neighbors") who helps her navigate her new iPhone. Marnie's the type of mom who books a Valentine's Day dinner so her daughter won't be alone, then misses every attempt Lori makes to save face when her ex walks into the same restaurant. When Lori ditches a friend's baby shower, Marnie goes in her stead with an extravagant gift, then takes on her daughter's friends as a new posse, bankrolling the wedding Jillian (Cecily Strong, "The Boss") always dreamed of even though Marnie has trouble remembering her name. When she bumbles through a live Hollywood location shoot, she becomes one of the extras, catching the eye of security cop Zipper (J.K. Simmons). But as much as Marnie wishes to see her daughter happy in love, she cannot imagine it for herself, fleeing at the suggestion of romance. Two years in, she still cannot bring herself to choose a headstone for Joe, despite the urging of his family. Sarandon internalizes the grief, allowing us to see mere hints of it quickly passing like a brief cloud cover across her face. Scafaria's packed her screenplay with behavioral observations driven by her characters and situations. While Marnie is constantly advising others to do things, her daughter is continually issuing 'don'ts' to mom. The one thing Lori keeps suggesting to get mom out of her hair - volunteer at the hospital - is fashioned by Scafaria into a touching generational communion when Marnie decodes the gesture made by an old woman (Jo Jordan) unable to speak. Marnie's optimism fuels a boldness which brings unexpected happy outcomes of two brushes with the law. In addition to the pitch perfect Sarandon, the film is cast with a who's who of funny females. Byrne, a gifted comedienne, makes her Debbie Downer here relatable, her own style of grief eventually perceived by mom during a NYC on-set visit where Lori's sitcom proves Scafaria's film-within-a-film. In addition to Strong, Lori's friends are played by Lucy Punch ("Into the Woods"), Sarah Baker ("The Campaign," the Louis C.K. 'fat girl' episode) and Casey Wilson (TV's 'Happy Endings'). "A Serious Man's" Amy Landecker is Lori's, then Marnie's, amusingly unflappable therapist. As Marnie's love interest (Michael McKean's Mark tries and fails), J.K. Simmons is a patient, quirky charmer. The production is as bright and sunny as Marnie, bathed in California sunshine and Beyonce. A boat wedding includes a live performance from Blues Traveler, a visit to Zipper's a large chicken coop. Along with "45 Years," "Grandma" and "I'll See You in My Dreams," "The Meddler," and Scafaria, prove that love isn't ageist and senior actresses like Rampling, Tomlin, Danner and Sarandon are quite capable of carrying a film. Grade:

Always the helpful person, Marnie will give advice to everyone – on everything. Most appreciate her kindness but Lori, who bore her mom’s meddling ways after her father’s death, is less than thrilled to have her mother so close. As Lori pushes Marnie’s motherly attentions away, the plucky matron soon finds others to lavish her wisdom upon, like Freddy (Jerrod Carmichael) who helps her with her computer and she, in turn, encourages him to go back to school. Ever generous, Marnie even drives him to school and intercedes with his bully brother, Fredo. This is just one of those whose lives she impacts. As is de rigueur for films, now, that has an older woman as the focal character – see Blythe Danner’s effective performance in 2015’s “I’ll See You in My Dreams” – there is a love interest in the guise of Zipper (J.K. Simmons), who is taking on the character part that has been the realm of gravely voice Sam Elliot. Zipper is a retired motorcycle cop who helps Marnie get over her romantic commitment issues and there is nice chemistry between the two... This is a great role for Susan Sarandon. Her inherently positive inner self comes out through her character, making Marnie a likable, sympathetic lady who is full of life and has a genuine love for those around her. Rose Byrne, as put upon Lori, delivers the exasperation of an adult, no longer a child, feels when mom gives her two cents on things like getting married and having a career. Marnie’s bubbly attitude is the kind of thing that would get to her more serious child. J.K. Simmons, as expected, is likable as Zipper and you root for him and Marnie to get together. “The Meddler” will entertain anyone who, like most of us, has a parent who butts into your adult life a little too much. You love them anyway. Happy Mothers’ Day!