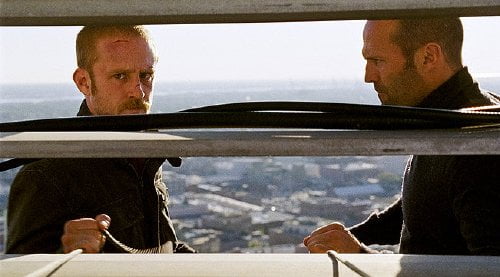 Arthur Bishop (Jason Statham, "The Bank Job," "The Expendables") is a loner, taking assignments from the man he considers his only friend, Harry McKenna (Donald Sutherland). When he's contacted by top boss Dean (Tony Goldwyn, "Joshua," 2009's "The Last House on the Left") to take out McKenna, he does so once faced with facts, but takes Harry's troubled son Steve (Ben Foster, "3:10 to Yuma," "The Messenger") under his wing as atonement to train the boy in the ways of "The Mechanic."

Updated by Richard Wenk ("16 Blocks") and the original 1972's screenwriter Lewis John Carlino, "The Mechanic" is one of those rarities, a remake that outstrips the original. Director Simon West ("Con Air," 2006's "When a Stranger Calls") infuses his film with style, but doesn't overlook the substance, even if the movie sometimes fails to suspend disbelief. Taciturn star Jason Statham is the perfect choice to take on the role originated by Charles Bronson, giving the character a modern makeover. The film opens with a stunningly filmed hit in which both Bishop and cinematographer Eric Schmidt ("Henry Poole Is Here") use artful illusion to snare their prey (Schmidt's being the audience). Back home in his remote New Orleans glass and frame house, Arthur reads news of drug cartel lord Jorge Lara's (James Logan) 'accidental' death while playing Schubert's Trio in E-Flat on his elegant turntable. A meeting with the wheelchair bound Harry in a cavernous, crowded roadside joint allows Sutherland to fill us in on Bishop's psychology, his way of 'seeing people differently.' Harry suggests Arthur needs more companionship in his life. Cut to Arthur's steamily professional relationship with Sarah (Mini Anden, "Tropic Thunder"). There are seven hits in the film, each serving a different purpose. After Bishop has regretfully dispatched his friend, with his friend's ironic assistance, he begins to instruct Steve (after appearing literally out of nowhere to save Steve from a foolhardy and misplaced act of revenge). Steve blindly follows Bishop's cryptic commands, adopting a Chihuahua and bringing it to a coffee shop daily. Steve accompanies Bishop on a call to a jumpy individual (J.D. Evermore, "Legendary") and appears astonished when Bishop suddenly takes the guy out. Then he learns what his assignment is to be - to hit the 6'7" 300 lb. Burke (Jeff Chase, "Sydney White," "The Spy Next Door"), a gay hit man with a fondness for Chihuahuas who frequents that cafe. But Steve blows the easy, planned opportunity, opting instead for an ultra violent encounter that's anything but uncontroversial with the higher ups (and also a bit tough to buy, given Foster's relative size). Still, Bishop sticks by him, only to see their next hit, jointly executed, also botched big time. Then things get interesting when both Bishop and McKenna discover they have been duped. The lone hitman looking to get out (hinted at here by Bishop's contemplation of a sleek sailing vessel) isn't original, but what makes "The Mechanic" interesting is its morals. There are multiple layers of loyalty and betrayal, guilt and redemptive revenge. McKenna Sr.'s 'kindly' appearance and physical impairment reflect a sheen of goodness onto a father figure who plays God to make his living. Bishop's an antihero to root for because he only kills bad guys and his disposition of his 'prop' dog is made romantic gesture. Statham's in his element but I've never been able to warm up to Foster, who at least dials down his psychotic wild eyed routine. Still, he's an improvement over the original, bogged down by a different kind of guilt, conflicted in his relationships with two 'fathers.' Support is well chosen, many from their native New Orleans, nary a boring pick in the bunch. As a sleazy televangelist, John McConnell ("Jonah Hex") is repellant. West stretches credulity here and there (the mid city attack on Tony Goldwyn's Dean takes over several blocks and includes the hijacking of a public bus, but no police presence is ever evident), but his film has a lean, fast paced running time and looks slick without any epileptic editing. Violence is well staged and pretty brutal. A scene where Bishop threatens a Dean lieutenant using his teenaged daughter and a running garbage disposal is a real gotcha. "The Mechanic" may be preposterous at times, but it exudes style and swagger.