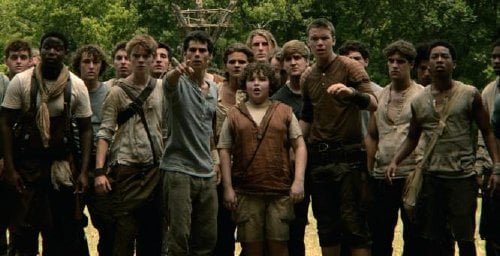 Thomas (Dylan O'Brien, "The Internship") arrives in the Glade by elevator, as boys have every month before him, with no memory other than his name. The Glade is surrounded by a giant maze, which a special group tries to map daily, but at night it's patrolled by Grievers, shut behind massive doors which protect the Gladers. When Glade leader Alby (Aml Ameen, "Lee Daniels' The Butler") and chief runner Minho (Ki Hong Lee) are about to be trapped behind these doors, Thomas exhibits an unlawful bravery that will turn him into "The Maze Runner."

Neo (Keanu Reeves) is lost somewhere between the Matrix and Zion, Niobe's (Jada Pinkett Smith) ship is missing and the machines are due to attack within twenty hours. The odds are stacked against the renegade humans at the beginning of the final part of the Wachowski brothers' trilogy, "The Matrix: Revolutions." The Wachowski's Matrix phenomenon created a fan base eager to delve into the complexities of their science fiction and unravel its riddles. After the disappointment of "The Matrix: Reloaded," which at the time of its release seemed nothing more than the bridge to the episode everyone really wanted to see, "Revolutions" is a loud finale that presents a jumble of ideas and images already seen in "Star Wars," "Alien," "Robocop," "Minority Report" and "The Terminator" to name but a few. The Wachowski's religious symbolism, which had a compelling, Catholic-based mystery to it in early goings, is revealed to be pretty simplistic and often as random as references to "Alice in Wonderland" and Greek mythology. "Revolutions" makes "Reloaded" look a lot better. Neo is awakened by a little girl, Sati (Tanveer Atwal), in a pristine subway station, who asks if he is lost. Her father, a computer program, explains that they await the train operated by the Trainman (Bruce Spence, "The Road Warrior") who works for the Merovingian. Neo is stranded in the station with an explanation about a program's love of its daughter ('It's a word. What is important is the connection that word implies.') after a dustup with its owner. Meanwhile, Seraph (Collin Chou), who knows about the Trainman, leads Trinity (Carrie Anne Moss) and Morpheus (Laurence Fishburne) to the Merovingian (Lambert Wilson) who demands the eyes of the Oracle ('new shell' Mary Alice of "Sunshine State" replacing the late Gloria Foster). Trinity gets riled by this demand, and, in another scene we've all seen before, everyone pulls guns on everyone else and Neo is released. Morpheus finds Niobe and after some contemplation, Neo tells the assembled group that he needs to take one of their two ships to Machine City. Roland (David Roberts) declares him insane, but Niobe presents Neo with her ship, stating that she will pilot the Nebuchanezer through a machine line back to Zion. Trinity, of course, leaves with Neo and a stowaway, Bane (Ian Bliss) who is really carrying Agent Smith (Hugo Weaving), the out of control program intent on battling both the humans and the machines. These two story lines now continue in parallel as Lock (Harry J. Lennix) mounts Zion's defense, although we see little of Neo and Trinity after their initial encounter with Bane until the film's conclusion. Giant borers set upon Zion, which allows multitudes of sentinels to enter. These are fought by an army led by Mifune (Nathaniel Lees), controlling giant mechanical robots which they wear like Sigourney Weaver in "Aliens." Ground troops are represented by Zee (Nona Gaye), who has volunteered in order to see Link (Harold Perrineau Jr.) get a chance to return home. (When the Nebuchanezer does finally make it onto the dock, the remaining citizens of Zion are ecstatic, as if they've won the war. It takes Lock to tell them it isn't over, which is as obvious as Bane's true identity). "Revolutions" is full of battles, explosions and light effects (a blinded Neo sees light, symbolizing the tunnel which leads to death or hellfire or whatever). Its familiar score is cranked up to accompany the mayhem. The series lost any humor after its first installment. The familiar cast do their thing (Reeves must be admired for the physical aspects of his performance) with Jada Pinkett Smith and Nathaniel Lees impressing with their resolved fury. Hugo Weaving, whose Agent Smith is like Jack Nicholson in "The Shining" toned down to pass for F.B.I., is one of filmdom's great screen villains. But have we travelled this far to discover that The Architect (Helmut Bakaitis), Neo and The Oracle are some sort of Father, Son and Holy Spirit and the Seraph has a past with Lucifer stand-in the Merovingian? (It should be noted that the final installment leaves a gaping opening for another round of sequels.) The Meaning of Life, which is alluded to throughout, is, apparently, free will. The Wachowskis have served up passable entertainment with "The Matrix: Revolutions," but they fail to deliver on their own mythology.