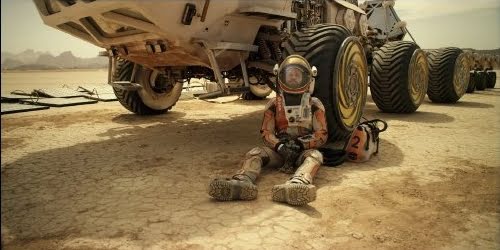 Just over the halfway point of the Ares III crew's manned mission to Mars, a windstorm comes in threatening to topple their ascent vehicle. Astronaut Mark Watney (Matt Damon) votes to wait it out, but Commander Melissa Lewis (Jessica Chastain) chooses otherwise. When Watney's slammed by flying debris on their way to the MAV, his crew assumes his death and evacuates. Mark is very much alive though and needs every ounce of his strength and ingenuity to survive until rescue can arrive for "The Martian."

Computer programmer Andy Weir originally wrote his novel for computer nerds and science geeks, making it available online chapter by chapter, then offering it on Amazon for a buck. Now it's almost required reading at NASA's Johnson Space Center and has been adapted by Drew Goddard ("The Cabin in the Woods," "World War Z") and made into a movie by one of cinema's most successful science fiction auteurs, Ridley Scott ("Alien," "Blade Runner"). The casting of handsome Everyman Matt Damon as the stranded astronaut the whole world wants back completes the cinematic package. This is the type of movie that has something for just about everyone. Conspiracy theorists will get a charge out of how Watney's fate is discovered by NASA communications controller Mindy Park (Mackenzie Davis, TV's 'Halt and Catch Fire'). Bill Nye the Science Guy fans will be rapt with how Mark figures out how to turn a few potatoes into a crop while techheads and historians should admire his retrofitting of 1997's Pathfinder probe in order to reconnect with his home planet. Even disco lovers are accommodated here, Watney's only source of music dictated by Lewis's niche taste (and "Guardians of the Galaxy" soundtrack inspiration). Romantics may be let down, however, as Watney, oddly, is the only member of the crew without someone waiting for him back home. The story's drama is fueled by a race against time. Watney may possess ingenious survival skills but his luck doesn't keep pace and the amount of time needed to reach Mars from planet Earth is running neck and neck with his best laid plans. While NASA Chief Teddy Sanders (Jeff Daniels in 'Newsroom' mode) makes almost inhuman demands on Jet Propulsion Labs's director Bruce Ng (Benedict Wong, "Prometheus") to speed up production of the rocket booster for the Ares IV mission, a young engineer, Rich Purnell (Donald Glover, TV's 'Community'), figures out a way for the Ares III crew, halfway home from Mars and unaware of his fate, to save Watney (it involves a space travel trick reminiscent of "Interstellar"). Sanders is against endangering six to save one, so chooses to stay his course, but Ares III flight director Mitch Henderson (Sean Bean, LOTR's Boromir, "Pixels") mutinies, getting the info to Lewis, who asks pilot Rick Martinez (Michael Peña, "Fury"), techie Beth Johanssen (Kate Mara, "Fantastic Four"), ship doctor Chris Beck (Sebastian Stan, "Captain America: The Winter Soldier") and chemist Alex Vogel (Aksel Hennie, "Headhunters") for a vote that will mean doubling down on their time in space. Meanwhile, we're given a dose of international community when the Chinese National Space Agency's Zhu Tao (Chen Shu) offers the U.S. their completed rocket booster to fuel a supply launch. "The Martian" is like "Castaway" in space with a heavy dash of "Silent Running's" interstellar botany. The film is driven with lots of humor, Watney's irreverent verbalizations to a video blog his sanity check, his unfettered responses to NASA a challenge for PR director Annie Montrose (Kristen Wiig), his sparring with Martinez indicative of his crew's joshing camaraderie. Back on terra firma, we have Daniels working with his head as NASA Mars Mission director Vincent Kapoor (Chiwetel Ejiofor, "12 Years a Slave") responds more passionately from the heart. The inter-agency and international bonds provide a keen sense of coming together towards a common goal, humanity shown at its best, although the strategies come so fast and furiously one may wonder just what the essential difference is between the two different plans to use the Chinese booster other than added drama. Everything comes together in a heart-stopping rescue attempt ripped right out of "Gravity." "The Martian" may be stitched together with recognizable bits, but they fit together into an entertainment that's better than any of the sources it's plundered. Grade: