The Man of My Life (L'Homme de sa Vie) 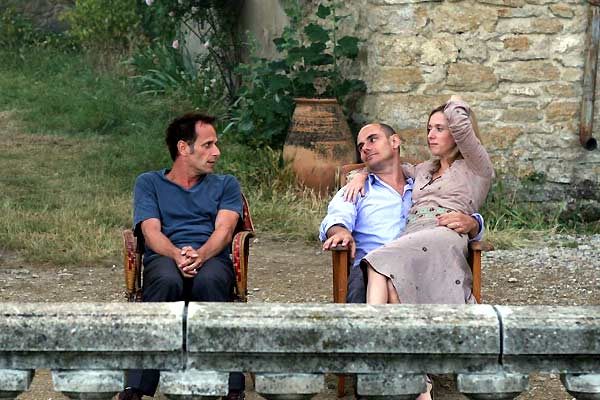 During a family vacation in Provence, Frédéric (Bernard Campan, "How Much Do You Love Me?") makes note of a jogger who passes him in the forest. Hugo (Charles Berling, "Ridicule," "Demonlover") is staying next door, so Frédéric invites him to an extended family meal where Hugo announces he is gay. During a long after dinner conversation, when Frédéric's wife, Frédérique (Léa Drucker, "In My Skin"), leaves the two men alone, talk turns to their opposing views on the nature of love and, over time, Frédéric is startled to discover that Hugo is "The Man of My Life."

Cowriter (with Agnès de Sacy)/director Zabou Breitman has made an extraordinary film about the many facets of masculine love using expressive and impressionistic nature and art imagery to float her ideas on. This being a French film, the verbal element is important as well, and Breitman gives her two main characters distinctly different voices and is adept with the subtle double entendre. This haunting and thought provoking film only stumbles with a few abrupt, arbitrary and not entirely convincing character revelations, but these flaws can be forgiven in the overall experience. One could be flip and describe "The Man of My Life" as the intellectual's art house remake of 'Crustacés et coquillages,' because, except for that film's cheating wife, the plots are strangely similar - either that or there is a French summer house subgenre I am unaware of - but the similarities end there. Watching "The Man of My Life" felt like making a discovery, beginning with an exquisite discussion between Hugo, standing outside the front door, and Jacqueline (Jacqueline Jehanneuf, "When the Cat's Away," "Adolphe"), Frédérique's mother, standing in an inner hallway where a curtain always billows, no matter how calm the air. It's a strange phenomenon, she tells him, as he encourages her to find romantic love in her life. 'I have cake,' she replies. I should have been tipped off by the film's opening scene. We have Frédéric's point of view of his young son Arthur (Niels Lexcellent), dressed in super hero cape, kneeling on his chest. 'Are you awake?' 'No, I am not.' 'Yes, you are talking!' Or by the way Breitman makes Frédéric a chemist whose chemistry is changing and Hugo a graphic artist whose work projects messages to, and even on, Frédéric. A shot of a child's alternately clear and color paneled vinyl beachball on the grass in front of a river is amazing, then made more surreal when the child enters the frame. A surreal, central tango symbolizes the entire film. Breitman keeps her story moving forward, but continuously cuts back to the progression of that conversation as we see Frédéric, a typical romantic recognizing that although sexual passion is hard to maintain his wife is nigh on perfect, slowly come under the spell of Hugo, a man who lives for today. It is unfortunate that Breitman cheats Frédérique, introducing her in a lusty marriage which too suddenly grows shaky, and that Hugo has a cliched background which revisits him with too much irony, but it is the unique pleasures to be found in "The Man of My Life" that are what linger. 'Life is imperfect, but death is not.'