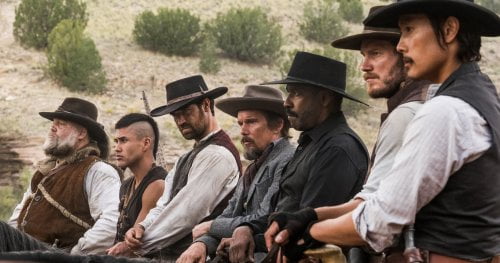 The western town of Rose Creek is under the brutal rule of Bartholomew Bouge (Peter Sarsgaard). Gold was discovered near the town and Bouge, with his army of enforcers, enslaved the men of the town to mine the precious metal. Desperate, two of the townsfolk journey far and wide to recruit gunmen to help them take their town back. They find “The Magnificent Seven.”

In 1879, the small town of Rose Creek is under the thumb of robber baron Bartholomew Bogue (Peter Sarsgaard) who offers its farmers $20 for their land or they can follow the fate of Matthew Cullen (Matt Bomer, TV's 'American Horror Story'), the man he shot in public view for standing up to him. But Matthew's widow Emma (Haley Bennett, "The Equalizer") wants justice, so she ventures out to find hired guns. When she offers warrant officer Sam Chisolm (Denzel Washington) 'everything they have,' he agrees to take the job and assembles "The Magnificent Seven." With an update from Richard Wenk (2014's "The Equalizer") and Nic Pizzolatto (HBO's 'True Detective'), director Antoine Fuqua ("Training Day," "Southpaw") remakes John Sturges' 1960 Yul Brynner/Steve McQueen starrer which itself was a remake of Akira Kurosawa's "The Seven Samurai." The Mexican farmers have been replaced by American stock, threatened over gold and water rights rather than their crops, but Fuqua's found diversity in his overtly representative seven, which includes a black man, a Comanche, a Chinese assassin and a Mexican (there's also a woman who, while not part of the seven, plays a major part in the climactic shootout). This edition isn't as hokey as the original but has trade-offs in its action packed finale where gunslingers defy credibility sharpshooting from horseback and firing Colt .45s with both hands. Bogue, with his speeches about democracy equaling capitalism, almost seems designed to resemble a certain presidential candidate. He's one mean dude, burning down churches and killing women. Sarsgaard plays him with dead-eyed menace, but he's found a match in Washington whose own stare means serious business. But Cullen's business of gathering his men isn't always serious. When he walks into a saloon, the only man left sitting is amused gambler Josh Faraday (Chris Pratt), a man who likes his whiskey, a good cigar and magic tricks. He has nothing better going on so teams up with Cullen. Sharpshooter Goodnight Robicheaux (Ethan Hawke) is found doing the circuit taking bets on Billy Rocks (Byung-hun Lee, "I Saw the Devil," "RED 2"). Goodnight has a debilitating secret. Billy's equally deadly with gun or knife. Vasquez (Manuel Garcia-Rulfo, "Cake") is running from men like Sam, wanted dead or alive. Trapper Jack Horne (Vincent D'Onofrio, best in show) proves his mettle before he's even met his associates. Sam's role as a licensed peace officer in Indian territory comes in handy when Red Harvest (Martin Sensmeier, HBO's upcoming 'Westworld') arrives, a man apart from his tribe. This film's big set piece is more strategically planned, more modern warfare than plain old fashioned killing, and its all the better for it, personalities wedded to plans of action. The filmmakers can't resist a classic two man standoff ('Should I know that name?' 'You should know it from your obituary'), but tweak it with a modern twist. Fuqua pays homage to classic Westerns with his Leone-esque closeup montages and silhouetted figures in doorways. Cinematographer Mauro Fiore's ("The Equalizer," "Southpaw") compositions are beautiful with action edited to respect spacial coherence. We hear composer James Horner ("Titanic"), who died last year, for the last time here, his orchestral score highlighted with reverberating horns, hand claps and pan flutes (the score was completed by Horner's "Southpaw" producer Simon Franglen and Elmer Bernstein's original score plays over closing credits). Fuqua's "The Magnificent Seven" may be a little too flashy, but it's a stunning production that respects character. With so many unnecessary remakes flooding into theaters, here's one that's worthwhile. Grade:

Any film buff worth his/her salt is familiar with the history behind the latest reimagining of “The Magnificent Seven.” Its direct predecessor is John Sturges’s 1960 classic. “The Magnificent Seven,” but that film was directly influenced by Akira Kurosawa’s 1954 masterpiece, “The Seven Samurai,” who, in turn, was influenced by American director John Ford’s many western films. Antoine Fuqua is the re-inventor of the latest “Seven” and he faithfully follows the script recipe of the two earlier films. A town is under siege by a band of really bad bad guys (in the predecessors the baddies were bandits}. The townsfolk decide to strike back and send a pair of representatives to find the heroes that will rid them from their oppressors. They find one willing warrior, Sam Chisolm (Denzel Washington), and they set off to recruit the rest of the Seven. Once assembled, the Seven go to the besieged town and begin the training montage of the men folk to turn them into fighters. Once that is done, the Seven plan a strategy for the coming battle, fortifying the perimeter of the town to repel the bad guys. Then, of course, is the big battle that all the preparation leads up to. This recipe runs through all of the “Seven” movies and it is a solid formula. Fuqua, following the formula to the letter, creates a fast-paced action western where the heroes are larger than life while the villains are vile and murderous. Denzel Washington, as Sam Chisolm is dead on as the leader of the Seven, reprising the strong character that Yul Brenner, in 1960, and Takashi Shimura, in 1954, created in their leads. The rest of warrior heroes are all distinct characters and personalities with Chris Pratt as Faraday, who becomes Sam’s right hand man in the battle, much like Steve McQueen in the Sturges film. The rest of the Seven include Ethan Hawke, as sharpshooter Goodnight Robicheaux, Vincent D’Onofrio, as mountain man Jack Horne, Byung-hun Lee, as knife throwing Billy Rocks, Manuel Garcia-Rufo as the mirthful Mexican gunman Vasquez, and Martin Sensmeirer, as Native American warrior Red Harvest. All are well-defined and played by the actors and all are fully developed personalities. Peter Sarsgaard, as the evil Bouge, is just right as the villain; all he needs is a moustache to twirl. The rest of the cast are merely two-dimensional, with the exception of Haley Benet as Emma Cullen, the wife of the man gunned down in cold blood by Bouge. She is the sole, strong woman character in the film and bad ass to boot. Whereas the previous films did a slow build to the climax battle, Fuqua introduces the violence early on with shootouts, an attack on Bouge’s enforcers to take back Rose Creek, and more shootouts. The action is pretty non-stop with scores of enforcers being gunned down by the Seven – and Emma Cullen. I would be interested in the body count of dead enforcers – the prior films set the number of bandits at 40. Fuqua makes them an army of hundreds and they go down in droves. More is better and louder is better, here, but Fuqua uses a hammer and anvil approach to a story that has more subtlety than he gives it. The latest “Seven” is solid summer entertainment with lots of action, more shooting and some humor, mainly delivered by Pratt. I have watched the ’54 and ’60 versions many times – they are the kind of films which, if I channel surf and see them playing, I will watch, no matter at what point I come into it. I cannot say that I would do that with the new “The Magnificent Seven.” But, it is entertaining and well made and