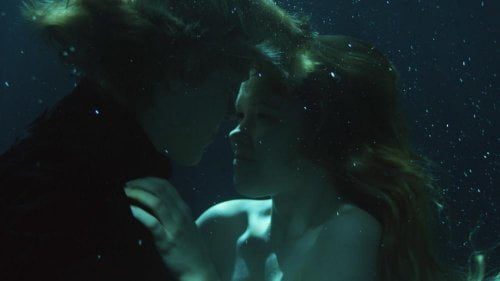 Golden (Michalina Olszanska) and Silver (Marta Mazurek) are mermaid sisters who want to walk the land among the humans. They sing their siren’s song to a group of musicians on the beach, promising they will not eat them if they help. They arrive at a Warsaw nightclub where their fishy fins startle and thrill the crowd in “The Lure.”

In 1980's Poland, a family of dance restaurant performers singing on a beach are interrupted by the siren call of two mermaids. Sisters Silver (Marta Mazurek, "The Innocents") and Gold (Michalina Olszanska) have both fallen for Bass player Mietek (Jakub Gierszal, "Dracula Untold"), but their approaches to romance couldn't be more different as the duo are set up to 'sing backing vocals and strip' as "The Lure." Agnieszka Smoczynska's Polish mermaid cannibalism musical sounds like a cult film in the making, a bizarre mashup of Hans Christian Andersen's 'The Little Mermaid' and Eastern Bloc dance hall restaurant culture with a perverse twist on mermaid mythology. But while its musical numbers soar with the grimy glamor of "The Rocky Horror Show," the story that ties them together (screenplay by Robert Bolesto) is too scattershot and the lyrics to original songs by Barbara and Zuzanna Wronska often juvenile. "The Lure" is worth seeing for the elements which work, but it needed more cohesive weirdness to elevate it to true cult level. Grade:

I did a bit of research into the mermaid myth and found that, though they may lure sailors to their death, do not generally feed on humans, but is a main characteristic of the heroine’s of “The Lure.” Golden and Silver are two sides of the same coin – Silver wants to live and fall in love and live among the humans while Golden sees them as a tasty morsel. If you are expecting Hans Christian Andersen’s The Little Mermaid, you are at the wrong movie. “The Lure” is a strange amalgamation of alt-fable, horror flick and sometimes impromptu musical as our two mermaids make new lives in the human world. It is certainly an original view of the denizens of the sea that goes in a very different direction than Ron Howard’s “Splash (1984).” It is aimed at the horror fans that prefer originality in their favorite genre and, boy, do they get it.