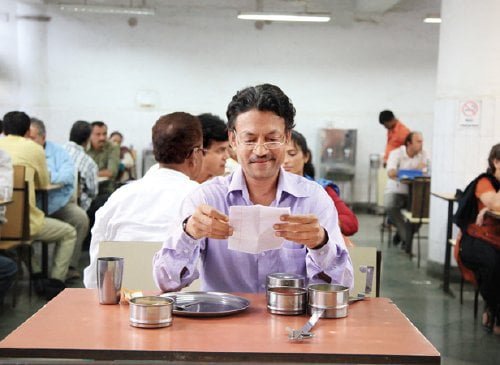 Ila’s (Nimrat Kaur) marriage is on shaky ground and she fears that she may lose her husband, Rajeev (Nakul Vaid). So, she prepares a delicious noontime repast and sends it via a delivery service, hoping to get her husband’s attention once again. The service makes a rare mistake and delivers the food, instead, to a lonely, nearing retirement widower Sajaan (Irrfan Khan) who will come to appreciate, in many ways, “The Lunchbox.”

Writer/director Neil Burger, whose indie "Interview with the Assassin" was a clever imagining and whose "The Illusionist" showed he could handle a mainstream art film takes a big step back with "The Lucky Ones," a sitcomy road movie that throws together three hard luck Iraq war vets. Rachel McAdams ("Red Eye," "Married Life") is Colee, a wounded vet on 30 day leave who hopes to create a family with that of the boyfriend she met and lost in the war. She's been missed on the screen and still shows sparkle with less than stellar material. Michael Peña ("World Trade Center") is TK, who is looking to regain his literally wounded manhood before facing a girlfriend in New Jersey. Tim Robbins ("Mystic River") is Cheaver, home for good but arriving to find his wife, having gotten used to life on her own, wants a divorce and his son, having been accepted at Stanford, needs $20K within three weeks. The three become buddies on the road they travel together longer than expected, chunked into episodic experiences. A few work but most, like a stop at a revival house, an invite to a wedding and the combination of three sex workers in an RV and a tornado, decidedly do not. A sweet, if not unexpected, romance develops between two of the characters and the third makes a decision that is supposed to surprise but which can be seen coming a mile away. Despite good performances from the main trio, "The Lucky Ones" won't have much luck as the latest Iraq themed film sure to disappear quickly from theaters.

Do not expect a lot of excitement and action in this charming film about a tiny delivery mistake made by a Dabbawalas – the lunch delivery service ferrying the traditional multi-tiered Indian lunchboxes to the office workers of Mumbai. Ila sends her very specially prepared lunch to her husband when the mix up occurs and Sajaan gets the delicious food instead. The next day, the mistake is made again and Ila and Sajaan begin to correspond via the lunchbox. This begins a series of heartfelt communications as each opens up to the other to tell their hopes and fears of life. This is the first feature film by writer-director Ritesh Batra but the quiet lyricism of the story, the near hypnotic journey of the titular box as it travels back and forth through Mumbai, and the creditable acting chemistry by the prolific Irrfan Khan (“Life of Pi,” “Slumdog Millionaire”) and his never face-to-face costar Nimrat Kaur belies the helmer’s newness to the industry. The quality of the story and Batra’s deft skill at telling that story makes this a special film. It is not a tweenie film but one that address real adult issues – a man facing a retirement he is not ready for, a woman who knows she is losing her husband to another. It is also about two people finding each other through a simple delivery mistake.