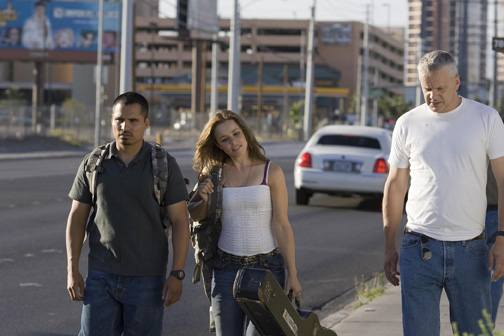 Three injured soldiers return home from Iraq for recuperative leave. Colee (Rachel McAdams) took a bullet in the leg, Cheever (Tim Robbins) has crushed vertebrae after a Porto john fell on him and TK (Michael Pena) was wounded in his private parts. They arrive in New York just when a massive power outage hit the northeastern US. All flights out are cancelled and they rent a car, beginning a cross-country journey that will bind the forever as "The Lucky Ones."

Writer/director Neil Burger, whose indie "Interview with the Assassin" was a clever imagining and whose "The Illusionist" showed he could handle a mainstream art film takes a big step back with "The Lucky Ones," a sitcomy road movie that throws together three hard luck Iraq war vets. Rachel McAdams ("Red Eye," "Married Life") is Colee, a wounded vet on 30 day leave who hopes to create a family with that of the boyfriend she met and lost in the war. She's been missed on the screen and still shows sparkle with less than stellar material. Michael Peña ("World Trade Center") is TK, who is looking to regain his literally wounded manhood before facing a girlfriend in New Jersey. Tim Robbins ("Mystic River") is Cheaver, home for good but arriving to find his wife, having gotten used to life on her own, wants a divorce and his son, having been accepted at Stanford, needs $20K within three weeks. The three become buddies on the road they travel together longer than expected, chunked into episodic experiences. A few work but most, like a stop at a revival house, an invite to a wedding and the combination of three sex workers in an RV and a tornado, decidedly do not. A sweet, if not unexpected, romance develops between two of the characters and the third makes a decision that is supposed to surprise but which can be seen coming a mile away. Despite good performances from the main trio, "The Lucky Ones" won't have much luck as the latest Iraq themed film sure to disappear quickly from theaters.

There is no dearth of Iraq war aftermath stories. "The Lucky Ones" is the coming home soldier story of three of our damaged veterans who paid the sacrifice for their country. Colee, Cheever and TK arrive at JFK just when the huge 2003 power outage blacked out the entire Northeast. All flights are cancelled so Cheever decides to rent a car and drive to his Midwest home. However everyone else in the airport had the same idea and, when they finally get to the rental counter, all the cars are gone. The sympathetic, patriotic rental clerk takes them aside and, with heartfelt thanks, lends them a VIP-reserved SUV. The trio set off across country. As expected, the three soldiers bond and fast friendships ensue while the miles tick away. We learn about their lives and loves and missions. But, when Cheever finally arrives home, it is to the news that his wife (Molly Hagan) is leaving him. Stunned, he sets off on the road, again, with his new friends; with the plan to drop them all off at the closest airport and go their separate ways. Colee and TK are both bound for Las Vegas. Her mission is to return a treasured guitar, supposedly once owned by Elvis himself, to the parents of her now dead soldier boyfriend. TK is taking a side trip before returning to the east coast to his fiancee. He is afraid that his equipment won't when the time comes and is heading to Vegas to find out. Cheever is heading for the Pacific Northwest to see his brother. At least, that is the plan. "The Lucky Ones" is a routine road trip movie that benefits most from its three well-acted leads. There is good chemistry amongst them and the characters they create are likable and funny. Director Neil Burger, with a script by the helmer and Dirk Wittenborn, gives us a straightforward, no frills buddy movie but you enjoy traveling with the GIs and grow to like them as people. Unfortunately, nothing new and different is told and the final outcome is no surprise. Techs are mediocre, at best, with grainy, murky lensing by Declan Quinn, a surprising disappointing contribution by a cinematographer know for much better works ­ "Rachel Getting Married," "Vannity Fair" and "28 Days" are good examples. "The Lucky Ones" (the title is both tongue in cheek and literal) is an okay road movie but is nothing special. I recommend it for rental, which should come soon.