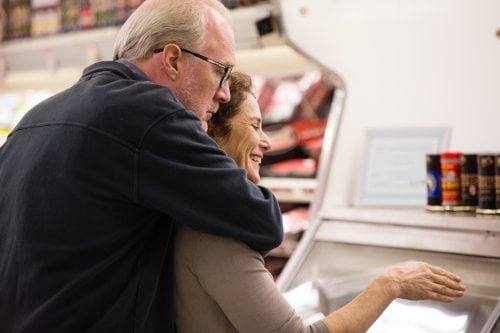 Mike (Tracy Letts) and Mary (Debra Winger) have been married for a long time, not happily, and their life together has drifted apart. Mike is carrying on an affair with a much younger ballet teacher, Lucy (Melora Walters), while Mary is also seeing another, Robert (Aiden Gillen), in secret. Their lovers want a deeper commitment but Mike and Mary are waiting for their son, Joel (Tyler Ross), to come home so they can break the news to him first in “The Lovers.”

Michael (Tracy Letts, "Indignation") tries to comfort Lucy (Melora Walters, "Magnolia") as she sobs sitting on the edge of a bed. Mary (Debra Winger) meets Robert (Aidan Gillen, "Calvary," HBO's 'Game of Thrones') on a tree-lined street, assuring him that she loves him but must return to work. The news that Joel (Tyler Ross, "V/H/S/2") will be coming home from college for a visit inspires both Michael and Mary to commit to Lucy and Richard that they will end their marriage once their son has gone back to school, but with finality hovering over them, passion reignites for "The Lovers." Writer/director Azazel Jacobs' ("Terri") latest is a light-hearted inverse of his "Momma's Man," a film in which he cast his own mother and experimental filmmaking father as the rock their son, panicking over adult responsibilities, clung to. In "The Lovers," the parents both toil as analysts in cubicle farms. While Joel's in shock over his parents' sexily affectionate behavior, believing they should have split years ago, Michael's past as a musician is revealed when Joel's girlfriend Erin (Jessica Sula, "Split") asks how they met Notably, Lucy is a dancer who paints on the side while Richard is a published writer, reflecting the thwarted dreams of Michael and Mary. Michael and Mary's days are filled with the push-pull of marital infidelity, both working to keep their lovers in limbo while giving each other excuses for absences neither seems to care about. When Michael actually comes home from work at his usual time, frustrated over Lucy's increasing demands, Mary invites him to share the wine she's drinking. They sit together on the couch and turn their attention to the TV. But the next morning, Mary awakens to find Michael facing her and in his sleepy state, he kisses her. Things progress from there and the married couple find themselves chuckling over each other's texts during the day. After work, they go shopping for their son's visit and Michael is approached by Richard with a dire warning. He says nothing to his wife. Joel arrives angry, pitched for battle with the parents whose marriage has made his life hell. When he finds harmony with a whiff of sex in the air, he's thrown, but determined to air his grievances. The family weekend explodes. Jacobs keeps things on a relatively even keel until Joel enters the picture, Ross's abilities so off the mark in relation to the filmmaker's more mature cast the film begins to list. It's great to see Winger in a lead role (recent years have seen her in supporting parts in "Rachel Getting Married" and "Lola Versus"), her Mary a jumble of tension, anxiety and lust. Letts's Michael is the inarticulate male personified, always in reaction mode. His one emotional declaration, muted in song form in the film's last act is, unfortunately, unsupported by anything in Jacobs' screenplay. Gillen is a plot obstacle, Walters needy to the point of mental imbalance, undercutting the film's coda. Lesley Fera (TV's 'Pretty Little Liars') adds normalcy and light comedy as Mary's coworker Susan. The barebones production is minimalist, cinematographer Tobias Datum and production designer Sue Tebbutt's palette bright neutrals. Mandy Hoffman's ("Momma's Man," "Terri") fanciful, upbeat orchestral score lets us know we're in romcom territory. The film has its charms, but "The Lovers" is a punch line masquerading as a feature film. Grade:

Writer/director Azazel Jacobs takes on a middle-age marriage breakup as the start for a clever bit of writing sleight of hand that makes the subject interesting in its execution. Mike and Mary go through the motions of an outwardly “happy” marriage that has been on the rocks – whether because of boredom or indifference – for a long time. Each finds solace in another with promises to their significant others of a new life, one they keep stalling on doing because of Joel and his upcoming visit. The story begins in typical in flagrante fashion with Mike and Mary carrying on their “secret” affairs with Lucy and Robert, meeting out of sight of others. Their lovers are growing tired of the lack of commitment and are increasingly pressuring Mike and Mary to make the break. Both promise that it will all occur as planned until something happens between Mike and Mary. This is where the story makes its turn to some clever writing and dialog. The best thing about “The Lovers,” besides the script by Azazel Jacobs, is the chemistry and dialog between Tracy Letts and Debra Winger. They are convincing as a couple unhappy with their life together and seek new love elsewhere. The change of direction the story takes with the two is convincing and believable, particularly the wrap up. What did not ring real are the couple’s lovers, Lucy and Robert. It is not that the actors were the problem but their characters. I did not feel that Mike would be with Lucy, or Mary with Robert. The characters were so shallowly drawn as to not make sense to me. Lucy and Robert would be a better match for each other. Son, Joel, is not well defined, to me, either, which makes it hard for me to empathize with the young man – though I see why I should. The film belongs to Winger and Letts and I rooted for them through to the end. The goings on around them kept me at arms length, though.