The Lovers and the Despot 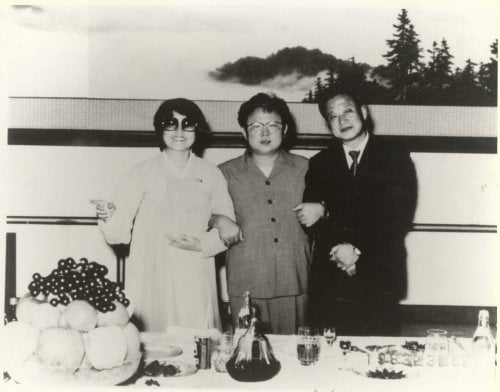 In the 1950's, Shin Sang-ok was the biggest filmmaker in South Korea, a director with his own studio, Shin Film. He married one of Korea's most famous actresses, Choi Eun-hee, but when he embarked on an affair with a younger actress and fell into debt and disfavor their marriage ended in divorce. In 1978, with two children and little money, Choi Eun-hee responded to an offer from Hong Kong, but little did she know her contact was a North Korean spy. She disappeared. When her ex-husband traveled to Hong Kong to find her, he contacted an old colleague who also turned out to be a spy. After Shin spent five grueling years in a North Korean prison, the couple were reunited at a birthday party for Kim Jong-il who planned to use them to gain international renown for North Korean filmmaking. Cowriter/directors Ross Adam and Robert Cannan document the strange story of "The Lovers and the Despot."

In their home country, many South Koreans doubted the story of their prior preeminent filmmaker, but while Adam and Cannan go a long way toward eliminating those misgivings, their film often bogs down filling in meaningless details while its more intriguing aspects receive little exploration. Through no fault of their own, the documentarians had little archival material to work with, but in their attempt to fill this gap, they use frustratingly unidentified film clips of movies unlikely to be known in the West. Still, "The Lovers and the Despot" is a true life thriller, a tale of espionage, kidnapping and propaganda so bizarre it's surprising it's taken this long to get the cinematic treatment. In addition to Choi Eun-hee's own testimony (Shin Sang-ok died in 2006), we hear from Michael Yi, the Hong Kong detective who investigated both disappearances, escaped former Kim Jong-il Court Poet Jang, film critics who met the couple during their state-sanctioned forays outside of North Korea and the couple's two adopted children. A large portion is given over to the couple's time in South Korea, some of Shin's employees describing the excesses that led to his downfall, bill collectors camping out in their front yard. In Hong Kong, Choi Eun-hee is assigned a 'shopping guide' who eventually takes her to a pier where she's hustled onto a boat and drugged over the course of days. (We see footage of both events - recreations? movie footage? the real thing? - hard to say here.) At her destination, the actress is astonished to be greeted by a friendly and smiling Kim Jong-il who houses her in a Western style abode with a garden and parades her around at public events. She spends five years screaming towards the south and raising vegetables. Shin's story is wilder as he's imprisoned upon his arrival and immediately begins plotting escape. His son tells of how he got away and jumped a freight train with no idea of where it was heading. He was captured and put into solitary confinement where he eventually gave up ideas of "The Great Escape" and began to play along with his brainwashing indoctrination. Kim Jong-il's upbringing is sketched in as psychological background to the ruler who remained in his far more popular father's shadow. Where Kim Il-sung was a natural politician, Kim Jong-il considered himself an artist. The man loved movies, thought himself an expert, but as we learn from Jang he was frustrated by his own country's output, all following the same ideological plot. Upon reuniting Shin and his ex-wife, the dictator apologized for the 'mistake' that had been made by his operatives in Shin's treatment, offering the couple unlimited funding and support to create whatever films they wished (Choi Eun-hee secretly recorded this conversation, which later would be the West's first exposure to Kim Jong-il's voice). Shin and Choi, acting as his co-director, made seventeen films in little over two years, including the first love story North Korea had ever seen. They were feted in Moscow, later in Berlin, Shin spouting nothing but the enormous artistic freedom North Korea had provided them to the press (Kim Jong-il had great affection for Shin, asking only that he never betray him). But Shin was waiting for his moment and he and Choi found it in Vienna, their North Korean guards occupied in a card game. The made a harrowing escape to the U.S. Embassy where their story was questioned but where their secret recordings and experience were coveted. In 1986, the couple were flown into Washington D.C. Two years later they headed to L.A. to revive their careers. Shin worked on Disney's "3 Ninjas" series. While all of this is intermittently compelling, we never learn of Kim Jong-Il's response to the defection, nor is there any critical analysis of Shin's real impact on North Korea's filmmaking industry (Jong-Il went on to produce his own version of 'Titanic' which was only released in its home country). We do not know whether the couple, who remained together, ever saw their children again (Choi's were taken care of by her sister during their years in North Korea, Song's additional two and their mother are never again mentioned). Most importantly, while Choi tells us they were happy working in North Korea even as they pined for freedom, it is Song's perspective that is direly missing here, the man who rose to the top, fell, then triumphed again in extraordinary circumstances only to fade away in L.A. Grade: