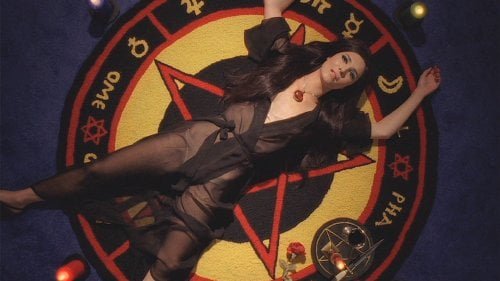 After the devastation of being left by her husband, Jerry, Elaine (Samantha Robinson) moves to a new town to begin a new life and find the man of her dreams as "The Love Witch."

A clear labor of love from producer/writer/editor/composer/costume and set designer/director Anna Biller, this throwback to Gothic sexploitation horror films of the 60's and early 70's ia a feminist contemplation on sexual equality. Cinematographer M. David Mullen ("Jennifer's Body") uses every trick in the book (along with some he's written), bringing rich jewel tones of red, pink, purple, blue, yellow and green to his 35mm film, employing in camera effects for some psychedelic vibes. The score is a mix of original composition and old Italian genre film music from the likes of Ennio Morricone which add atmosphere and humor. You may not like Elaine by the time her story's ended, but Robinson with her vivid eyeshadows, cats eye liner and Barbara Steele black tresses commands the screen. Although one would be convinced by the costumes, hair, makeup and vintage cars of the cast (Elaine drives a red Mustang convertible) that the film takes place in the era it emulates, this is a modern day story (as evidenced by the use of a cell phone in the film's last act). Elaine is on the way back from suffering a nervous breakdown, although she tells us still has 'intrusive thoughts' which appear to include the poisoning of her husband. Fact or fantasy? Arriving at her new apartment in a sprawling Victorian, Elaine is greeted by Trish (Laura Waddell, "Saving Mr. Banks"), a perky neighbor who has keys from just having redesigned the space. The witchy accoutrements are just to Elaine's taste (one must admire the dedication of a filmmaker who even hooked a pentagram rug for her set). Intrigued by the stunning newcomer, Trish takes her to a tea room (which could have invented the color pink), an all female enclave where Elaine informs Trish that having been reborn as a witch, she understands men now. Women must 'give them what they want,' becoming their fantasy. Trish chafes at the notion, displaying her independence when her husband Richard (Robert Seeley) arrives having hoped to take her to lunch. In the town square, Elaine catches the eye of 18th century French literature professor Wayne (Jeffrey Vincent Parise, TV's 'General Hospital') and turns her feminine wiles on full steam. She convinces him to take her to his remote retreat and slips him a love potion. He becomes so smitten, Elaine's turned off, but she's overdosed him on love and ends up burying him in his garden, adorning the grave with a witch bottle (her own urine, rosemary sprigs and her used Tampon, an item men amusingly fail to recognize). When Trish leaves town on business, Elaine turns her attentions to Richard, who suffers similar results. Elaine meets her coven leaders Gahan (Jared Sanford) and Barbara (Jennifer Ingrum) at a local burlesque club where we learn the town's turning against the witches in their midst. After joining in a nude witches' circle and a Tarot reading, Elaine meets Griff (Gian Keys), a detective who calls investigating Wayne's disappearance and quickly entraps him with her charms. In Elaine, Biller has set up a feminist dichotomy, a woman who wants a man to love her yet goes about it with false feminine ploys. Elaine's motivation, though, doesn't really appear to be love but a craving for adoration. Trish is her polar opposite, but even Trish is empowered when she sneaks into Elaine's bedroom and tries on her things. The message is a bit murky, although Biller goes out with a bang, reversing the male fantasy of an objectified female to Elaine's conception of her final conquest. If the film's production surpasses its story, Biller has nonetheless given us a wild, hoot of a ride with cheeky flourishes like a dissolve from Trish's open-mouthed scream to the strawberry sauce being poured over her cake. "The Love Witch" is a witch's brew of unicorns, voodoo dolls and garters, a unique outing from a crafty filmmaker. Grade: