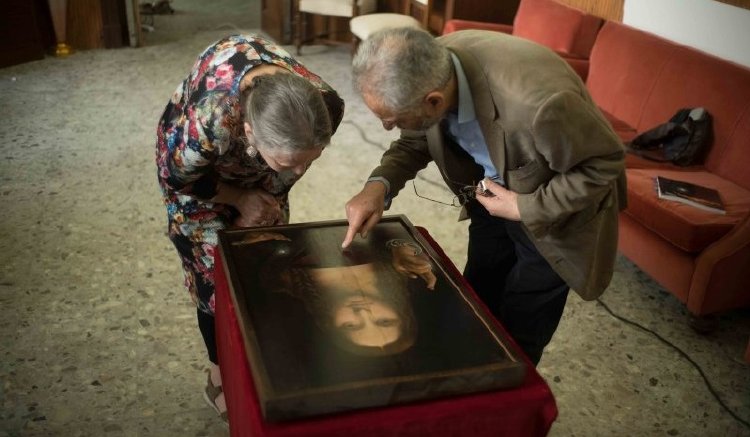 Alex Parish describes himself as a ‘sleeper hunter,’ someone who looks for paintings at auction houses which may have misattributed them to lesser artists.  In 2005, he gambled $1,175 on one from the 16th century a New Orleans gallery categorized as being in the style of the school of Leonardo da Vinci.  In 2017, Christie’s auction house sold the Salvator Mundi, or ‘Savior of the World,’ for $450 million as “The Lost Leonardo.”

Cowriter (with Christian Kirk Muff)/director Andreas Dalsgaard spent years following the art and financial worlds’ shenanigans surrounding a painting with a murky provenance that was so badly damaged, 90% of it is actually comprised of the years long restoration work of Dianne Modestini, a fact oddly omitted by London’s National Gallery when it exhibited the work in 2011 with a ‘signature’ of Leonardo da Vinci.  The prestigious National Gallery’s curator at the time, Luke Syson, had called in a group of expert da Vinci scholars to see the painting and while some were convinced, others were not and yet Syson apparently went with the conclusion, an informal one at that, which most served his agenda.

Time and time again, Dalsgaard uncovers the shadier aspects of human nature as the motivating drivers for the painting’s increasing value, a painting American art critic Jerry Saltz condemns as not very good to begin with.  Saltz is one of the more entertaining of Dalsgaard’s many handsomely shot talking heads, his disdain for the art world flaunted in amusing fashion.

After Parish receives the work in a cardboard box, he notes there is just a swath of it which appears to be original, the bulk having been painted over multiple times, a large crack in the board plugged.  He brings it to prestigious restorer Dianne Modestini who shows it to her 98 year-old dealer/restorer husband Mario who declares it the ‘work of a great artist in the school after Leonardo.’  But as she works on the painting, conversing with her now deceased husband, she notes that the lack of a defining line on the subject’s upper lip is exactly the same of that of the Mona Lisa and concludes this is the work of da Vinci himself.  She’s been defending it ever since, rejecting criticisms that her desire for it to be the master’s work influenced her own by stating she cannot paint like Leonardo, while others, such as art critic Kenny Schachter, point out such problematic issues as the fact that while da Vinci painted on wood boards, he would have rejected this one because of the knot which eventually caused so much damage.  There is also an incorrectly positioned finger, something which seems unlikely given da Vinci’s extensive study of the human anatomy.  The painting’s provenance can only be traced to a London sale in 1900 and a couple references to a painting which might be it listed as having been owned by two of England’s kings.

Parish and his partners Robert Simon and Warren Adelson went fishing with Modestini’s restoration, putting a $200 million price tag on it.  No one was interested until Russian oligarch Dmitry Rybolovlev asked Swiss dealer Yves Bouvier, the man who invented the freeport tax havens seen in the movie “Tenet,” to acquire it for him.  Bouvier initially tried to dissuade him, but eventually bought the painting for $83 million then sold it to Rybolovlev for the ‘discounted’ price of $127.5 million, an impressive two day profit.  Rybolovlev, who was in trouble after his Russian mine collapsed, used art works to transfer money out of the country.  We learn that this is becoming standard practice among the billionaire set, but when an investigative art journalist uncovered Bouvier’s business practices, Rybolovlev went to war, dead set on destroying the dealer by demanding he unload his entire collection for the prices he had paid within one month’s time.  This impossibility ironically led to Salvator Mundi smashing the record for the price paid for a painting and set off a showdown between the Louvre and its new owner and two heads of state.  Saltz gets to skewer Christie’s auctioneers while we are treated to the auction house’s incredibly manipulative marketing video featuring another Leonardo – DiCaprio.

Dalsgaard’s thriller of a documentary posits that greed, power, stature and politics fuel the value of art far more than aesthetic mastery.  His “The Lost Leonardo” is one of the most fascinating, all encompassing and entertaining of the increasingly large documentary genre dealing with the art world.

Around the turn of the 20th century, a painting was discovered, called “The Salvador Mundi.” To some experts it is the definitive work of the great master Leonard Da Vinci while to others it was executed by another hand at another time. Its initial price was a mere $1175 but, in a Christie’s Rockefeller Center auction in 2017, it sold for the tidy sum of $450,312,500 to the collector who must have really wanted “The Lost Leonardo.”

The international art world is, some consider, the most unregulated legitimate business in the world – quasi-legitimate, I now believe after seeing director Andreas Koefoed’s insightful look into a world more concerned with the worth of the art than with its legitimacy.

As I watched “The Lost Leonardo” unfold, I found that, as a documentary, it morphed from one aspect of the once-lost Salvador Mundi to another and another. As said, it was found around 1900 and, at a shady New Orleans auction, garnered the dirt cheap price of just over a grand.
Then, come the authentication wars that, on one side, definitely proved the work real and from the hand of the great master. The opposing side, though, pointed out all the discrepancies that came up – like, the work was painted on a wooden board, a cheap one at that, and not a “canvas” Da Vinci would ever use.

Finally, the “good” part of the story, the price battle that took place put the Salvador Mundi in the rarefied world as the most expensive painting ever sold. This, in turn, led to the mystery story of who bought it at such an astronomical price and what will become of the infamous art work.

It is the details that abound in each of these separate pieces that make this fascinating and somewhat disgusting with its sheer excess. It is an art world detective story that left me with the question: IS the painting genuine? We do not get the answer but it is still a darn interesting story.

Sony Pictures Classics “The Lost Leonardo” opened in NY/LA on 8/13/21 and expands to other markets.