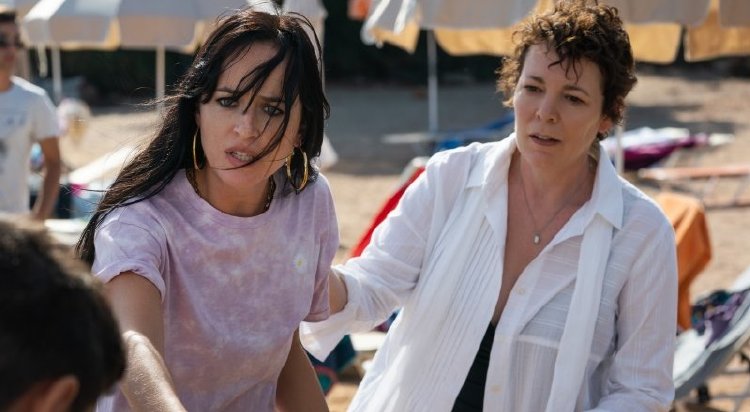 Leda (Olivia Colman), a single, middle-aged comparative literature professor, is shown about her rental apartment by its owner, the solicitous Lyle (Ed Harris).  She’s on holiday in Greece, enjoying the solitude of a small beach and the attentions of Will (Paul Mescal, TV's 'Normal People'), the young man who works at the beach house.  One day, Leda’s reverie is broken by a large, boisterous family celebrating a birthday on the beach.  After an initial, rude confrontation, peace is brokered by the expectant Callie (Dagmara Domińczyk), but Leda becomes a confidante of the younger mom Nina (Dakota Johnson) after she leaves the panicking family on the beach to find “The Lost Daughter.”

Writer/director Maggie Gyllenhaal makes her feature debut with an adaptation of Elena Ferrante's novella in which a woman’s holiday experience jolts her into confronting her own maternal past.  Colman is superb in the lead, a guarded woman running warm and cool, used to keeping her emotions hidden until she recognizes the same marital and maternal discontent she once experienced herself in another.  Gyllenhaal’s overall tone is sinister, established in opening flash forward moments suggesting foul play, an unusual choice suggesting judgment in a film whose lead ultimately seeks to forgive herself.

Gyllenhaal’s changed the Italian characters into an Englishwoman now living outside of Boston and an extended family from Queens.  Callie, seven months pregnant with her first at forty-two, offers cake to the woman who refused to move for them, then begins to nose around for personal information, sprinkling compliments amidst the probing questions.  But Leda’s had her eye on Callie’s younger cousin, the sexy, raven-haired Nina and the young daughter always demanding her attention and notices that when the woman’s husband, Toni (Oliver-Jackson-Cohen, 2020's "The Invisible Man"), joins them on weekends, they always seem to fight.  When Nina begins to call for Elena, no longer anywhere in sight, Leda remembers a similar scenario with her eldest, Bianca (Robyn Elwell).

And so we are witness to the young Leda (Jessie Buckley), just beginning to make her academic name while dealing with two young children, her husband, Joe (Jack Farthing, "Spencer"), frequently traveling for work.  Leda’s youngest, Martha (Ellie Mae Blake), presents little problem but Bianca can be quite a handful, slapping her mother until Leda erupts in a fit of anger.  One day, Leda receives a phone call asking her to speak at a conference and she leaps at the chance, her career clearly providing more joy than motherhood.

Back in Greece, Leda wanders off the beach and right into Elena, returning the girl to her grateful mother but surreptitiously stowing the girl’s doll away in her bag.  Elena is inconsolable, the doll’s disappearance the family’s next commotion.   Leda keeps it in her apartment like contraband, always fearing its discovery.  An affair of the past (Peter Sarsgaard’s Professor Hardy) is paralleled in the present, Leda a participant in one, a conspirator in the other.

Gyllenhaal’s film casts a strange net, Colman her most provocative lure, but some aspects of it are difficult to fathom, like Leda’s arm’s length relationship with Lyle, his dubious parenting history their only link.  The strangeness with Elena’s doll may be attributed to a vengeful acting out against her own daughter, yet Leda appears more desirous of forgiveness.  Her eventual confession is met with an equally bizarre over reaction.  Buckley also gives a strong performance as the younger, harried mother, but is simply unbelievable as a younger Colman, a distracting casting decision.

“The Lost Daughter” features a mix of excellent and provocative performances and a bracingly honest portrayal of motherhood, but some of its more quirky mysteries feel like empty directorial flourishes.  Still, Gyllenhaal comes out of the gate with a strong voice and capable craft, the film’s artistry undeniable.

Leda (Olivia Coleman) has packed off her two grown daughters to visit their dad in Canada. Anticipating the loneliness of their departure, she treats herself to a vacation in southern Italy and, when there, begins feeling a sense of liberation. Then, a loud, boisterous family intrudes on her peacefulness and open doors to old demons for “The Lost Daughter.”

We actually get two distinctly, though linked by time, different stories about the same woman, Leda. As she starts to unwind on her impromptu vacation, the calm is shattered by the arrival of the large, extended family. In particular, she notices a young mother, Nina (Dakota Johnson), and her little girl. This unleashes Leda’s memories of her younger days and the trauma and angst of raising two young girls and juggling her life.

What we get is two movies where one, of the older Lena, depends on the story of her younger self, to unroll the more complicated pieces of her life in the present. In the flashbacks, Jessie Buckley plays the younger Leda as she struggles with life and family and, while I like the actress, there is a mismatch between Coleman and Buckley that was distracting.

Maggie Gyllenhaal makes her directing-writing debut in her adaptation of the Elena Ferrante novel is done well enough, as are the performances by the three femme stars. But, I never wrapped my head around the story – probably because I am a guy. (We are not too bright when it comes to nuance.) It is a dual character study well played by Coleman and Buckley