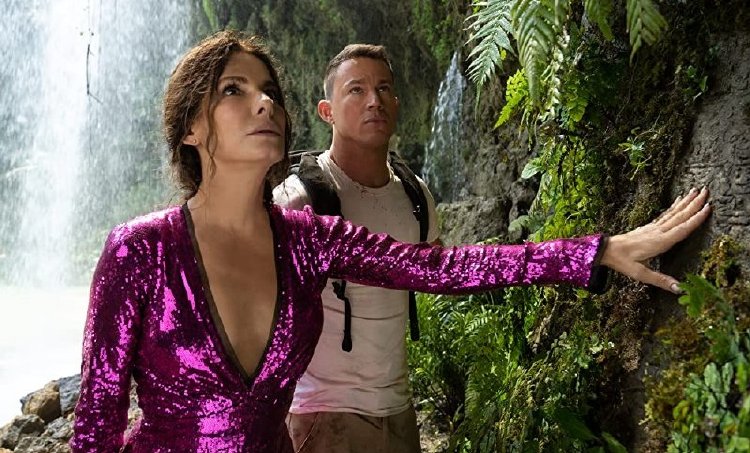 Best selling romance adventure writer Loretta Sage (Sandra Bullock) has been struggling to finish her latest novel since her archeologist husband passed away.  Pushed into a book tour by her well meaning manager/publisher/publicist Beth (Da’Vine Joy Randolph, “Dolemite Is My Name”), Loretta astonishes everyone by announcing she intends to kill off her fictional counterpart Dr. Angela Lovemore’s lover Dash McMahon, portrayed on her book’s covers by Alan (Channing Tatum), a man she has little patience with.  But when Loretta is kidnapped by a crazed billionaire who thinks she can locate the mythical red diamond headdress of her novel, it is Alan who springs to the rescue, following them to “The Lost City.”

There is nothing original in cowriter (with Oren Uziel and Dana Fox)/directors Adam and Aaron Nee’s fresh take on stale popcorn like “Romancing the Stone” except for the charisma of its cast.  And there’s plenty of zing and genuine fun to be had in the matchup of Bullock and Tatum, ably supported with a brief but hilarious appearance by Brad Pitt and the parallel adventures of Randolph and Oscar Nuñez.  “The Lost City” is the type of movie that makes one want to watch its blooper reel because the cast is clearly having a ball playing off one another.

After the flat looking, generic big city setup (which rather wastes “Together Together’s” Patti Harrison as Loretta’s social media manager and SNL’s Bowen Yang as she and Alan’s panel moderator), the action switches to Loretta’s fictional island (actually the Dominican Republic) which director of photography Jonathan Sela ensures will pop by having used something called the Zorn palette to remove all the saturated blues or greens until the action switched to the island.

There is also the matter of Loretta’s pink sequined jumpsuit, something she refers to as a ‘glitter onesie,’ which Beth borrowed for her tour appearance, a great gag from costume designer Marlene Stewart (“Free Guy”) that is the opposite of jungle camouflage, just as her black stilettos are the opposite of appropriate footwear.  That Alan arrives with a pair of her boots (as well as her favorite cheese snack) is Loretta’s first realization that she may have misjudged the guy.

Buy before they even get that far, Loretta must be rescued from her kidnapper, Abigail Fairfax (Daniel Radcliffe), and Alan’s reached out to an ex Navy SEAL he met in a yoga class.  Jack Trainer (Brad Pitt) is everything Loretta thinks Alan isn’t, even if he hires a ridiculous vehicle called a Cutie as his transport.  Alan, who wore a long, blonde wig on the cover of Loretta’s books, approaches long-haired blonde Jack at the airport like a long lost lover, then flinches when Loretta reacts the same way later.  Clearly the big guy has unexpressed feelings.  And when Loretta steals Abigail’s ‘clue,’ hieroglyphic symbols on a piece of parchment, as she’s stolen away by these two, is it any surprise her rescue morphs into a real life treasure hunt?

The film is never as consistently funny as it strives to be, but it has plenty of moments including a bit of down time featuring a romantic dance in a town square led by a man who clearly has the moves (Tatum).  If Bullock hadn’t recently announced a planned break from making movies, one could easily see this as the beginning of a franchise.  Who knows, with Pitt (who reappears during the film’s closing credits) and Tatum calling, maybe she can be convinced.