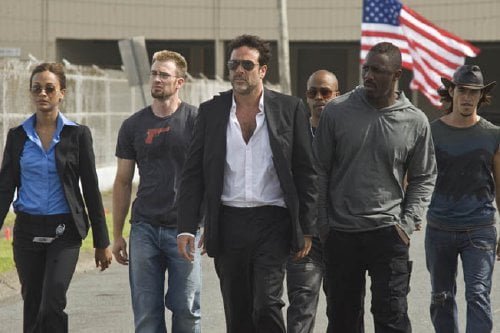 An Elite Special Forces unit is sent to target a Bolivian drug lord, but when they see a group of children being used as mules entering the compound, they attempt to call off the strike. Their CIA point man, Max (Jason Patric, "The Alamo," "My Sister's Keeper"), refuses to back down, however, so the team, led by Clay (Jeffrey Dean Morgan, "Watchmen") engages the enemy on the ground, rescuing the children while accomplishing the mission. Moments later their joy is turned to horror as they see the helicopter meant for them destroyed with its precious cargo. Stranded without any identity, Colonel Clay's unit will fight back as "The Losers."

Working with the comic book adaptation by Peter Berg ("Friday Night Lights") and James Vanderbilt ("Zodiac") and smartly cast characters, "Stomp the Yard" director Sylvain White delivers a cheesy, drive-in B movie that's a helluva lot of fun, despite a tragic opening jolt and some seriously nonsensical plotting. Buoyed by Jeffrey Dean Morgan's grizzled, tongue in cheek performance, Jason Patric's sarcastically condescending villain and a hilarious turn by Chris Evans ("Street Kings," "Push") as t-shirt loving Loser Jensen, "The Losers" is a cycle of violence and comedy with sprinklings of sex that usually hits its marks even when its stunts don't. After witnessing Jensen and Pooch (Columbus Short, "Cadillac Records," "Death at a Funeral") working jobs at a doll factory, we cut to Clay sitting with his former Captain, Roque (Idris Elba, HBO's "The Wire," "Obsessed") at a rigged cockfight. 'Could this get any more sleazy?' he asks before heading into the night air. Yup. He's approached at a bar by Aisha (Zoe Saldana, 2009's "Star Trek," "Avatar"), the slinky woman who's been following him. 'How's your steak?' she asks. 'Meaty,' he replies, 'want a bite?' Back in his shabby room the duo have a sex and violence romp that literally leaves the hotel on fire. Aisha explains she can get these men back into the U.S. but they have to hit Max in return, a job she considers a suicide mission. As Clay has a history of falling for the wrong girl, the group, especially Roque, is suspicious, but as they don't have many options they go along for the ride in a series of set pieces that take them from Miami to L.A. with audience stops in Dubai and Puerto Rico to keep tabs on Max and his henchman Wade (Holt McCallany, "Alpha Dog," "Vantage Point"), who's planning on selling sonic materializers (we see him implode an island with one), or Snukes as he calls them, to the Chinese. The film's silliness includes Aisha and Pooch piloting a 'Miami Police' copter with a giant magnet to pick-up a barricaded armored car supposedly containing Max, but turning up a Goliath Worldwide hard drive (there is no backlash to an explosive military operation on the streets of Miami) and Jensen's infiltration of said corporation as a 'Don't Stop Believin'' singing bicycle messenger (truly one of the film's highlights). Meanwhile Max takes out umbrella toting female aides in fits of pique and tasks Wade with assembling an eighteen member firing squad in twelve hours and then deciding to murder them to be rid of them ('One of them's my brother-in-law, but I said I'd do it.'). When he's not having people thrown off of fifty story buildings. The final showdown includes a betrayal from within and Clay facing down a motorcycle racing Wade and private plane coming at him from opposite ends of a runway that's a beaut, even if the tricks used to pull it off are less than believable. The dialogue and its delivery really make "The Losers" crackle. Everyone's always tossing off an in-character joke ('Oh look - three Snukes and a Dugatti!' says a gleeful Jensen opening a crate at L.A.'s port authority) and the Losers' repartee is witty, fast and furious. Jensen, who trots out a series of t-shirts, sometimes different ones in the same scene, is dissed for the pink Petunias tee supporting his niece's soccer team and his later seen checking out the mean-looking Marigolds, her eight-year-old competitors, as soon as they get satellite hookup. (Stay for a couple of extended scenes during closing credits, including Jensen and his mates at that final match.) Pooch, who always drives with a bobblehead Chihuahua on his dash, is trying to get home to the pregnant wife who thinks he's dead and who is going to kill him when she finds out otherwise. Cougar (Óscar Jaenada, "Che: Part Two," "The Limits of Control"), their silent handsome sniper, doesn't like his hat to be touched. And Aisha does indeed have a secret that seems to both jeopardize and energize her sexual sparks with Clay. The production is on the sloppy side. Bottles seem to break before they hit their targets and CGI work is less than subtle. White favors moving the action along over making sense, but in a comic book sort of way, it all works. Dunkin' Donuts product placement is turned into a visual gag, the sign of filmmakers having some fun. And if you don't take "The Losers" too seriously, so will you. "Kick-Ass" set itself up for a sequel I'm just not interested in. But I'd look forward to seeing these "Losers" again.

The CIA black ops team, led by Colonel Clay (Jeffrey Dean Morgan), is on a secret mission to laser spot the secret location of a prominent Bolivian drug lord, Fadhil (Peter Francis James), for a covert air attack. When the team realizes that some 25 children, used as drug mules, are also in the compound. Clay tries to call the operation off but his mysterious boss, Max (Jason Patrick) overrides the recall. Ignoring orders, the team goes in, rescue the kids and send them off to safety in their helicopter. They hear the order to destroy the aircraft and watch, in horror, as the helo tumbles from the sky, killing all aboard. This begins a comic book tale of revenge for “The Losers.” Based on the characters from the graphic novels by Andy Diggle, “The Losers” is pure action entertainment. As I watched the story unfold, I was struck by how similar it is to my favorite comic book series from the early 1960’s, Sgt. Fury and his Howling Commandos. Both have a gruff, strong and confident leader – here it is Col. Clay. They also both have a team of combat specialists loyal to their leader and to each other – here; it is Pooch (Columbus Short), Jensen (Chris Evans), Cougar (Oscar Jaenada) and Roque (Idris Elba). All have unique skills like weapons, computers, aircraft piloting and the ability to kick some serious ass. However, after the betrayal and apparent death of now self-named Losers, they no longer exist, as far as the CIA is concerned, and must cool their heels in Bolivia until they come up with a plan to get back to the US. Help arrives in the guise of a beautiful stranger, Aisha (Zoe Saldana), who, after seducing Clay, offers her help to sneak the Losers back into the US if they will do a job for her – get Max. No problem for the Losers since that is what they want anyway. Next thing you know, they emerge from coffins flown into Miami and begin to implement their plan for revenge. (Yeah, I know, the symbolic resurrection from the dead has been done before, but what the heck.) However, things are not what they seem on several fronts that make the twisty-turny adaptation by Peter Berg and James Vanderbilt a great deal more fun than it could have been. “The Losers” pits our heroes against Max and his minion of heavily armed henchmen, commanded by his right-hand man, Wade (Holt McCallany). However, what could have been simply a David versus Goliath battle layers with loyalty, disloyalty and betrayal for the titular band of brothers. Acting is good-natured, the cast interlays lots of humor with the copious action, and the result is (a surprise for me) particularly intelligent in an extremely goofy way. Jason Patrick steals every scene he is in as the ruthless, satiric Max. The rest fit the bill nicely. All techs are solid. There are two kinds of comic book-inspired movies, the “wait for it on Netflix or don’t even bother with it,” such as the “Transformers” movies, and the “see it on the big screen.” “The Losers,” well directed by Sylvain White, is firmly in the latter category.