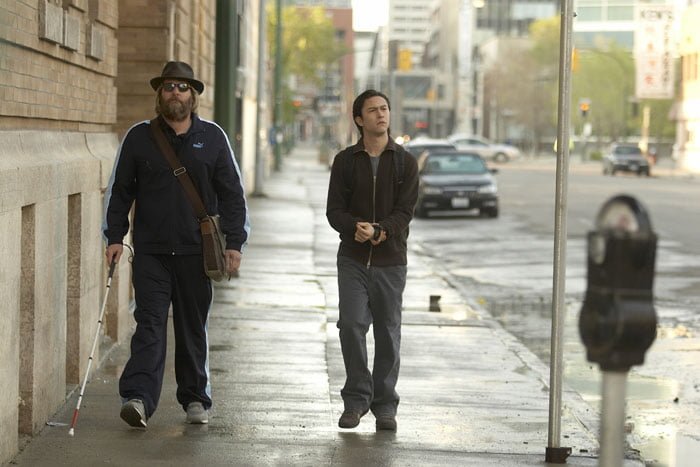 Chris Pratt (Joseph Gordon-Levitt, "Brick") was a wealthy jock with a gorgeous girlfriend until a rash flight of romance resulted in a horrible accident that killed two friends, injured another and left him with serious brain injuries. Chris is struggling but fairly content until he meets Gary Spargo (Matthew Goode, "Match Point," "Imagine Me & You"), a sympathetic slickster who turns his head with flattery and women until, too late, Chris finds he can no longer back out of his role, a small town bank janitor being used as "The Lookout."

Making his directorial debut, screenwriter Scott Frank ("Out of Sight," "Minority Report") creates a lead who has walked out of "I Know What You Did Last Summer" into a nightmare of a different sort - a crossing of "Memento" and "A Simple Plan." But Chris Pratt has redemption on his side via his own conscience and a guardian angel in the form of blind, older state sanctioned roomie Lewis (Jeff Daniels, "Because of Winn-Dixie," "Infamous"). Chris spends his days at a Kansas City Independent Living center relearning how to 'sequence' and his nights in the storefront bank of a small farming town cleaning and dreaming of a better job. The bank's head teller Mrs. Lange (Alex Borstein, "Good Night, and Good Luck," voice of "The Family Guy's" Lois) gives Chris hope, but Mr. Tuttle (David Huband, "Cinderella Man"), while kind, is more realistic about his ability to balance a till. Lewis helps Chris through is daily frustrations and floats his own dream of converting a gas station into a luncheonette, but he can't sell Chris's wealthy businessman dad Robert (Bruce McGill, "Cinderella Man") on staking his damaged son's independence partnered with a blind guy. Spargo steps in and gains trust to exploit this weakness, 'proving' Chris's only means of standing on his own is to abet the robbery of the bank that employs him. Ironically, Pratt's new found confidence and more mature appearance impresses Tuttle and the man's encouraging words shake Chris out of Spargo's seduction but not his snare as Chris realizes his mistake on the night of the big heist. Having failed to heed the good advice of Lewis, spurning his friend in the bargain, Chris will have to rely on his own wits in his young life's second tragic event. Joseph Gordon-Levitt has played the damaged youth before ("Manic"), but "The Lookout" gives the former child sitcom star more of a challenge in having to express ranges of emotion through the haze of disrupted thinking. A case of social deinhibition allows for some cocky come-ons that he reacts to differently depending on the woman in his company just as his disablement sparks feelings from frustration to guarded hope. Frank's script gives the actor tools to work with, such as Lewis's discovery that Chris can sequence his thoughts properly if he starts from the ending and the glimpses of blonde in a pink coat that may or may not be the girlfriend from the front seat of that ill-fated convertible. Support is terrific all around, from Daniel's highly convincing blind man (the actor uses his eyes extremely well) whose liberal, amusing front obscures his craftiness to Goode's suave bad guy and Isla Fisher's ("The Wedding Crashers") Luvlee, a sympathetic hooker hired by Spargo to bolster Chris's confidence and swing him to the dark side. Sergio Di Zio ("The Boondock Saints," "Cinderella Man"), a young David Paymer lookalike, is also incredibly sympathetic as 'Deputy Donut,' the naive small town cop who checks up on Chris (although Frank's final placement of the character is akin to shooting puppies in a barrel) and Greg Dunham, a shadowy Sam Shepard double, is evil personified as the black clad henchman Bone. Carla Gugino ("Night at the Museum") is wasted in one throwaway scene as Chris's case worker. As a director, Frank may occasionally tip his hand too far, but he knows how to create sinister tension, never more so than during a 'Thanksgiving' dinner held at a farmhouse under cheerfully masked invasion. Production design recalls everything from the worn down urban apartments and hidden picket fence rot of "Blue Velvet" to Edward Hopper's Nighthawks.