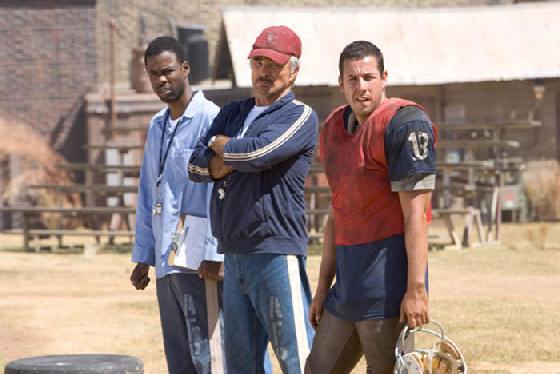 Paul 'Wrecking' Crewe (Adam Sandler) is a former NFL MVP living in disgrace with his shrewish girlfriend Lena (Courteney Cox, TV's "Friends") after being indicted for point shaving during a pro game. After a meltdown that ends up in a televized high speed chase, Crew finds himself in Allenville Penitentiary, where Warden Hazen (James Cromwell, "Babe," "L.A. Confidential") wants to use his expertise to take his guard team to football glory. Forced into a corner, Crew, along with former Heisman Trophy winner Nate Scarborough (Burt Reynolds, star of the 1974 original), puts together a misfit team that will fight their own prison guards for "The Longest Yard."

Returning to the football field of "The Waterboy," this time out Pop Warner quarterback Sandler just doesn't play to his strengths. This Happy Madison production, directed by Peter Segal ("Anger Management,"50 First Dates") and cast with many Sandler cronies, is steeped in mediocrity. Younger Sandler fans, especially those who have not seen the Reynolds original, are sure to be satisfied anyway. The fallen sports hero is an immediate target of sadistic guard leader Captain Knauer (William Fichtner, "Crash") and the prison population at large, but one guy, a wheeler dealer by the name of Caretaker (Sandler's former SNL cast mate Chris Rock), befriends him. The duo's football tryout notices attract the likes of Brucie (Nicholas Turturro, 2004's "The Hillside Stranglers"), an enthusiastic player with no talent and a taste for the cheerleading tranny Ms. Tucker (Tracy Morgan, "Are We There Yet?"), Switowski (kickboxer Bob 'The Beast' Sapp, "Elektra"), a simple minded big guy and Big Tony (Joey Diaz, "Taxi," "Analyze That"), a former Kansas State player who has gone to pot keeping Mickey D black marketeer Cheeseburger Eddy (Terry Crews, "White Chicks") in business. They're approached by Scarborough who offers to coach and also suggests that Crewe actively recruit talent. Caretaker encourages Crew to go after the black population, so Paul plays a one-on-one basketball game with Eddy, who is surprised he has to resort to cheating to beat the man down. Impressed with his persistence, Earl Megget (rapper Nelly), a really, really fast runner, joins up. Crewe also meets one on one with two of the Penn's most notorious head cases. Torres (Lobo Sebastian, "Ghosts of Mars," "Alex & Emma") joins up when he learns he'll be tackling guards. Turley (Dalip Singh, a 387 pound power lifter from India), a monosyllabic giant, is wooed with games of ping pong. When Eddy and his cronies see Megget being racially harassed by a trio of guards, they're in too and team Mean Machine starts to look like something to reckon with. Crewe is still given almost unbeatable odds, though, when prison rat Unger (David Patrick Kelly, "The Crow") tries to take him out and gets the wrong target and the warden threatens pinning the murder on him if he doesn't fix another game... Sheldon Turner's adaptation of Tracy Keenan Wynn's 1974 screenplay is pretty faithful save updates like product placement and the seemingly requisite dumbing down. Team sabotage, like replacing Guard Engleheart's (World Champion Wrestler Kevin Nash, "The Punisher") steroids with estrogen, is amusing but the hand is overplayed when about the fifth reference to the joke involves Engleheart cheering with the tranny's (for the wrong side, to boot). The filmmakers really bungle the con's death which ultimately gives Mean Machine its resolve - it's too confusing and abrupt to carry the emotional weight the film's latter half should have resonated with. Knauer's turnaround is also shallow, seemingly coming out of nowhere. Crewe's given all kinds of wiseass lines (his berating of a short, jug-eared cop much to his partner's star struck amusement is good fun), but Sandler's not up to the swagger that should accompany it. Reynolds' Crewe was a godlike, sex symbol of an athlete (that was the time of 'Broadway' Joe Namath), but Sandler leaves us wondering why his bankrupt butt would attract the likes of Bentley-driving Courtney Cox. Surprisingly, Sandler does not look out of place on the actual field, even surrounded with NFL pros playing guards. Rock's less abrasive than he can be, Reynolds is a welcome presence and Nelly is convincing in his feature debut. Cromwell and Fichtner are OK villains, but could have delivered a bit more bite. Most of the players are cliche bound, although Crews comes across as a hardened con. Cloris Leachman ("Spanglish") proves herself a good sport as the warden's aging secretary lusting after Crewes. Sandler talisman Rob Schneider ("50 First Dates") cameos with his signature tag line. "The Longest Yard" remake offers nothing over the original. It's just another bit of Hollywood recycling for a new market.

Paul Crewe (Adam Sandler) had a sure thing as a pro football quarterback until he was charged with shaving points and banned from the game forever. Fed up with his go-nowhere life, he gets drunk and “borrows” his socialite girlfriend’s (Courtney Cox Arquette) Bentley. When she reports the car stolen, Crewe is arrested and sent to prison where his former sports prowess will once again come into play in “The Longest Yard.” In 1974, Burt Reynolds put his sassy charm and infective laugh to good use when he created the character of Paul Crewe for the original rendition of the Robert Aldrich’s “The Longest Yard.” There was a self-assured and selfish cockiness to his quarterback character that takes on the job of putting together a prisoner football team to play against the penitentiary’s semi-pro guard team. Reynolds’ Paul is only concerned with making his stay in prison as easy as possible and not get hurt playing the game. Adam Sandler, as the new Paul Crewe, is but a shadow of what Reynolds brought to the role. This brings up the question I have with the remake of The Longest Yard.” Why? The ’74 film, besides having a credible, amusing performance by Reynolds, was cast with veteran character actors such as Eddie Albert, Bernadette Peters and Michael Conrad that fleshed things out and made it fun and action-packed. The remake, by director Peter Segal, is just that. A remake. And, it’s one that is steeped in mediocrity. The screenplay by Sheldon Turner based on the film written by Tracy Keenan Wynn from a story by Albert S. Ruddy is nothing more than a carbon copy of the original. Rather than re-imagining the source work, the new “The Longest Yard” rubber-stamps it almost scene by scene. But, the real problem lay in casting Adam Sandler as Paul Crewe. Burt Reynolds was at the top of his form and gave a devil-may-care performance as a man who is changed by his experience. Burt put an arc on Paul that made his redemption in the end a rousing event. Sandler comes across, right away, as a nice guy and has nowhere to go with his character. The Paul Crewe you get in the beginning is the Paul Crewe you get in the end without much change. The supporting cast does an adequate job of recreating the original characters but, like Sandler, without giving any real depth. Chris Rock, as Caretaker (originally done by Jim Hampton who, you might remember, played the tin-eared bugler Hannibal Shirley Dobbs on TV’s “F Troop”), plays the prisoners go-to-guy and is okay as Crewe’s right hand man. Burt Reynolds gives “The Longest Yard” some credibility by taking on the senior prisoner Coach role so ably performed by Michael Conrad (think TV’s “Hill Street Blues” and “You be careful out there”). The rest of the players never get beyond the two-dimensional though Cloris Leachman does get some mileage out of her aged but still randy prison secretary, Lynette (originally done so well by Bernadette Peters in beehive hairdo and a smear of bright red lipstick). Techs are generally well done in “The Longest Yard” with the football action handled neatly. It would have been nice if the story and characters equaled the behind the camera efforts. As such, I would have been happier staying in on that stormy night I saw this remake and watched the ’74 original. If you like Adam Sandler, goofy comedy and football, I suggest seeing The Waterboy” instead.